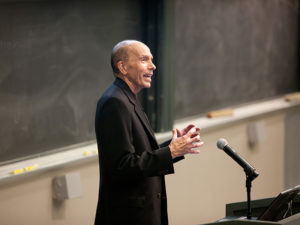 Paul Schimmel PhD ’67, MacArthur Professor Emeritus, delivering the Dean’s Colloquium lecture in 2011, entitled “What Was Learned from the Academic Life and the Darwinian World of Biotechnology.”

The Department of Biology at MIT has been an incubator of unparalleled excellence for decades. It is considered by many to be the best in the world, and that recognition comes from the presence of extraordinary faculty who, in turn, attract outstanding graduates from both MIT and other schools. These students have gone on to build our nation’s science and technology enterprises by doing groundbreaking research, spawning new companies, developing life-saving medicines, and providing high-level government service. Many of the new institutes that have sprung up across Kendall Square trace their roots to MIT’s Biology Department, from Professor David Baltimore and philanthropist Jack Whitehead’s creation of the Whitehead Institute in 1982, to Professor Eric Lander’s teaming with Eli and Edythe Broad to create the Broad Institute in 2003. The Koch, Picower, and McGovern Institutes have also sprung up with the help of the department. Companies ranging from small startups to global pharmaceuticals have opened their doors in Cambridge to take advantage of the local talent.

Paul Schimmel PhD ’67, MacArthur Professor Emeritus, was a member of the faculty in the Department of Biology for 30 years and was involved in starting several companies. According to his former student, Eric Schmidt PhD ’96, “Paul always exhibited a keen interest in translating biomedical innovation to the commercial setting, and beginning in the 1980s he became one of biotech’s few serial academic entrepreneurs. Somehow, despite any formal training in business, Paul was able to start multiple, highly successful companies.” Local Cambridge companies with Schimmel’s imprimatur include RepliGen, Alkermes, Cubist, and Alnylam, among several others in San Diego and Seattle.

Schimmel left MIT for the Scripps Research Institute in 1997. Every time he returns to campus, he looks around and asks himself, “What would Kendall Square and Boston be like if there were no MIT? More specifically, what would they be like if there were no life sciences at MIT?” It’s hard to imagine a world without the biotechnology that has spun out of MIT, and nearly impossible to imagine Kendall Square without the new life it breathed into the area. “What makes the Biology Department and the life sciences at MIT so extraordinary,” said Schimmel, “is the singular ability to transfer knowledge and inventions to society for its benefit. That is much of why Kendall Square and Boston are what they are.”

As a member of the Biology Visiting Committee, Schimmel has seen firsthand the decline in federal funding and its impact on the department. Federal support, specifically for training graduate students, has steadily declined. Exacerbating the problem is the fact that the costs of research and training increase every year. According to Department Head Alan Grossman, the department has historically relied extensively on government funds to train its students and to support research.

Grossman stated, “The good news is that we have a healthy research and training enterprise that has largely been supported by federal funds, and we have not had to ask for help in the past. The bad news is that we can no longer rely on this source of support, and we now need to turn to our alumni and friends to help support our research and training missions. With the Biology Department having no real history or experience in fundraising and asking for support, I am tremendously appreciative that Paul Schimmel has agreed to help us build the endowment for our Graduate Training Initiative (GTI).”

While at MIT, Schimmel and his wife, Cleo, anonymously contributed to the construction of Building 68. Shortly after leaving MIT, they endowed four four-year graduate fellowships for outstanding women in life sciences, Cleo and Paul Schimmel Scholars. Later, in addition to more gifts to life science, they sold their home in La Jolla and turned the proceeds over to MIT for the purpose of training the next generation of graduates. Schimmel said, “I’ve been talking to the people that I’ve started companies with, pointing out that the life science educational enterprise spreads across five departments at MIT and reminding them that none of the extensive commercial and residential real estate development, restaurants, hotels, and the founding and locating of major biopharmaceutical enterprises would have happened without the MIT life science enterprise. MIT’s Kendall Square is to biopharma what Silicon Valley is to technology. None of the robust economic impact would have occurred if it hadn’t been for MIT’s life sciences. It helps everyone, and now they need our help.”

Schimmel has been soliciting the CEOs of the companies he founded as well as the venture capitalists who made these endeavors possible – many of whom have no official connection to the Institute. “What pleases me greatly is the response from people who never attended MIT. They get it. And they have matured in their thinking to understand that there is no depth to happiness unless you are grateful, and they express that by making a personal sacrifice and letting go of personal resources for the future of society. I feel giving in this way is a cogent test of maturity and the state of one’s own heart.”

Among the first people to heed Schimmel’s call were Eric Schmidt PhD ’96 and his wife, Tracy Smith PhD ’96, who met as graduate students at MIT. They were motivated to make their gift not only because Paul asked them, but because “science has played a large role in our lives, and we have tremendous confidence in the value it brings to society. We feel very fortunate to have received a top-notch education from MIT, and are hopeful that our gift helps ensure that others can benefit from the same experience.”

According to Grossman, “The country’s life science enterprise is built on the foundation of basic research and our understanding of how living systems function. In order to understand, cure, and prevent disease, we need to know about the non-disease state. It is this basic research, combined with research focused on disease states, and the collaborative and entrepreneurial spirit at MIT, that makes our Biology Department such a special place and a unique incubator for research, discovery, and education in the life sciences.”