How to build a biotech renaissance

A look back at how Institute Professor Phillip Sharp, his startup Biogen, and MIT’s biotech community helped revive Kendall Square 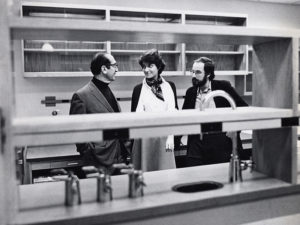 In the 1970s, if you stood at the corner of Main and Vassar Streets and looked out from the edge of the MIT campus, you would see nothing but a vacant lot. Kendall Square had been decimated by the decline of manufacturing and by businesses escaping to the suburbs, leaving only a few scattered outposts, such as Draper Laboratory and the Department of Transportation’s Volpe Center.

When the leaders of a new company, Biogen, looked for a location for their Cambridge headquarters in 1980, they chose a spot on one edge of that vacant lot, on Binney Street. When Biogen opened in 1982, the company was a pioneer on multiple fronts: it was one of the first few biotech companies, the first company to obtain a recombinant DNA (rDNA) license in Cambridge, and a harbinger of great changes in store for Kendall Square.

While Biogen never left Cambridge, it would move its headquarters for a time to the suburb Weston. But on February 11, 2014, the company, now Biogen Idec, celebrated its return to Binney Street. And the contrast between the Kendall Square of 1982 and 2014 could not be greater: This time, Biogen Idec would be joining a bioscience community populated by numerous high-profile biotech companies, research institutes, and startups.

Biogen Idec’s relocating celebrations included the unveiling of a series of permanent exhibits featuring some of the people important to the company’s history, as well as the dedication of a new building to Biogen co-founder Phillip A. Sharp, an MIT Institute Professor of Biology and a member of the Koch Institute for Integrative Cancer Research.

Sharp’s Nobel prize-winning discovery of RNA splicing at MIT helped lay the groundwork for Biogen. Naming a Biogen Idec building after a scientist is unusual — as they’re usually named after business people — but the name is fitting: In many ways, Sharp’s story mirrors that of the biotech renaissance in Kendall Square.

Finding a Community at MIT

Much of Sharp’s scientific career was shaped by searching for and finding the right community. He was looking for a place that would give him not only the right research tools, but also the right people who could provide mentorship, work toward similar goals, and exchange exciting new ideas. Sharp had worked his way from an undergraduate degree in chemistry in 1966 at Union College, a small liberal arts institution not too far from his rural home in the northern hills of Kentucky, to completing a doctorate in physical chemistry in 1969 at the University of Illinois.

His thesis used physical and statistical theory to characterize DNA as a polymer. But when he read the 1966 Cold Spring Harbor Laboratory symposium on “The Genetic Code,” he was inspired to join the emerging fields of molecular biology and genetics and sought the right community to help him make the jump.

Sharp found an excellent opportunity in working for Norman Davidson at the California Institute of Technology (Caltech), who had been working as a chemist, but was transitioning into what would become groundbreaking work in molecular biology. Sharp knew that in getting a postdoctoral position at Caltech, he would be joining “a whole host of very extraordinary young people and professors,” he said, with whom he would share the same scientific background and scientific goals.

When Sharp wanted to extend his research into human cells, he looked for a new scientific home, which he found at the Cold Spring Harbor Laboratory in New York. Sharp was particularly pleased to be working under the tutelage of the laboratory’s then-director Jim Watson. “I was totally excited about being in that environment,” Sharp explained, “because I knew there would be great people who were doing interesting things I could work with.” There, his postdoctoral fellowship eventually grew into a senior research position, where he studied gene structure and regulation using adenoviruses.

But, ultimately, Sharp wanted to work at MIT, to work alongside the likes of David Baltimore, who was using RNA viruses to explore mammalian cell biology, and David Botstein and Harvey Lodish, who both focused on bacterial and mammalian systems. Sharp wanted to be part of MIT’s community that focused on molecular approaches to understanding the human cell, which, he believed, was the future of the field.

In 1974, Salvador Luria asked Sharp to join the newly established Center for Cancer Research (CCR) at MIT (now the Koch Institute for Integrative Cancer Research). Sharp accepted, and moved to the center’s home in a small building on Ames Street that had been converted from a chocolate factory. Along with Sharp, Luria recruited many other researchers who would usher in what has been dubbed MIT’s “golden age” of biology.

At the CCR, Sharp joined a roster that already included Baltimore (who would win the Nobel Prize for his work on RNA viruses), Nancy Hopkins (who would make important discoveries about retroviral cancers in mice), David Housman (co-founder of Genzyme who identified the genomic location of the Huntington gene), and Robert Weinberg (who would isolate the first oncogene and tumor suppressor gene). Sharp’s Nobel Prizewinning discovery of RNA splicing occurred in 1977, only three years after he joined the CCR.

When Sharp arrived at the CCR, the center was embroiled in controversy. Its research program was organized around rDNA, a brand new, controversial technology that joined together DNA sequences from multiple sources, allowing scientists to introduce DNA between species.

In 1974, a group of scientists met to discuss their concerns about the potential hazards of rDNA. This group, led by Paul Berg, a Stanford University biochemist (and including Baltimore), worried that without setting responsible guidelines for rDNA, scientists could inadvertently cause serious harm. For instance, they could confer antibiotic resistance to naturally pathogenic bacteria or give otherwise harmless bacteria the power to cause tumors in humans. The group published a letter in the Proceedings of the National Academy of Sciences, later known as the “Berg letter.” The authors outlined their concerns and recommended a temporary moratorium on rDNA experimentation, which the National Institutes of Health (NIH) soon adopted.

But just when the international moratorium on rDNA experimentation was lifted, then-Cambridge Mayor Alfred Velucci called for an additional two-year moratorium, citing objections to the potential risks of rDNA experimentation and lack of public consent. While it was Harvard University’s proposal for a new facility that triggered the new moratorium, it was MIT that had the most to lose: The CCR facilities were already built, and its scientists were waiting to begin their rDNA research.

MIT and Harvard worked closely with the Cambridge City Council, developing a joint review board that would ensure rDNA facilities adhered to NIH guidelines. MIT faculty and administration met with the citizens of Cambridge at street fairs, teach-ins, and debates to help them understand rDNA research, and how the NIH guidelines would ensure their safety. By 1977, the scientific community won its case when the city passed an ordinance adopting the NIH guidelines and lifting the rDNA moratorium.

While the rDNA controversy slowed down the progress of research temporarily, MIT’s outreach to Cambridge citizens helped the Kendall Square bioscience community flourish. The quick success of the CCR in rDNA research persuaded the philanthropist Jack Whitehead to establish the Whitehead Institute in Kendall Square in 1982, in affiliation with MIT and led by Baltimore. The city’s established regulatory framework attracted the attention of biotech venture capitalists.

In fact, the innovative science at MIT and the regulatory transparency of Cambridge attracted the attention of Ray Schaefer, an MIT alumnus and venture capitalist. Schaefer began talks with Sharp and Wally Gilbert, a Harvard molecular biologist, that eventually led, in cooperation with several prominent scientists in Europe, to the creation of Biogen in 1978.

By the time Biogen opened its doors, fears about rDNA subsided in the face of the prosperity of the biotech research community. When Velucci cut the ribbon at Biogen’s opening ceremony, he reassured the audience that he had “no fear of recombinant DNA as long as it paid its taxes.”

Today, Biogen Idec is one of the many biotech companies and research centers clustered around MIT’s campus, many founded by the Institute’s leaders. Sharp’s colleagues at the Koch Institute — a mix of scientists and engineers working to fight intractable cancers — can take credit for many of these institutions. Since the Koch Institute was formed five years ago, its faculty (including MIT Institute Professor Bob Langer) have formed 18 companies, many of which are located in Kendall Square.

Other biotech companies have come to the neighborhood to take advantage of the healthy infrastructure in Cambridge and its vibrant bioscience community. While there were many individuals and organizations involved, MIT faculty members and administrators indeed played a major role in reviving Kendall Square, because they understood that in order to build a thriving bioscience program, they would have to build a thriving community of talented people — at MIT and beyond.