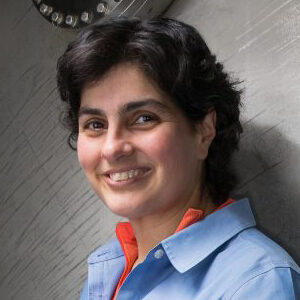 My fellow alumni and friends,

I write to you at the turn of the season and the blooming of hope. Across the state, the country, and the world, we are seeing an uptick in vaccinations that will pull us out of this pandemic and into a safer, and hopefully more peaceful, time. We are on the precipice of a new era, not only in the ways we live our lives post-Covid, but also in how we might see the life sciences expand and evolve.

The speed at which the first vaccines were developed and made available to the public is nothing short of a triumph for the life sciences. From sequencing the virus, to conducting clinical trials, to securing FDA authorization, to initial distribution, the mRNA vaccines for Covid came to fruition in under a year. Truly incredible!

The mRNA vaccine technology is based on decades-long research and the discovery of mRNA and split genes — discoveries made by the MIT School of Science’s own Phil Sharp. In our feature article, Professor Sharp explains how curiosity-driven research out of MIT’s Cancer Center in the 1970s would lead to a Nobel Prize for him in the 1990s and a vaccine for the world today.

At MIT, this fundamental research in the life sciences continues, and its connections with other areas, such as brain and cognitive sciences, are ever-expanding. In a profile on page 10, you can learn more about doctoral student Omar Rutledge, a combat veteran examining the ways in which post-traumatic stress disorder and the effects of isolation may physically alter connections in the brain. On page 7, you can read about Professor Laurie Boyer’s investigations that have shown that having three copies of chromosome 21, or Down syndrome, has profound effects not only on neuronal connections but on cardiac tissue as well.

As Dyann Wirth ’78 states: “There has never been a more important time to support the life sciences. This is a time of amazing discovery, enormous opportunity and great challenges.” You can read more about Dyann, a leading biologist in the study of malaria, and her challenge to support science scholarship in this year’s 24-Hour Challenge. Along with donors Priscilla King Gray and Glenda Mattes, Dyann pledged to help support our students and faculty, including our cross-disciplinary research in biology and through the Aging Brain Initiative.

But biology and brain and cognitive sciences are only two of the many areas within in our scientific enterprise. On page 12, you can read about my physics colleague Lindley Winslow and her explorations of neutrinos and the world of particle physics.

On page 22, you can also learn about Frank Wilczek’s careerlong exploration into the fundamental theories of physics in his recently published book and Richard Binzel’s contributions to the New Horizons mission to Pluto.

At our March virtual event, MIT Better World–Sustainability, David McGee and Jeremiah Johnson, in the Departments of EAPS and Chemistry, respectively, presented recent research from their labs. You can watch the recorded sessions about paleoclimates and plastic chemistry at your leisure. (An overview of the event and details on how to watch are found on page 16.)

This spring, four of our faculty (out of only 20 named nationally) received awards from the National Academy of Sciences (NAS) for extraordinary scientific achievements in fields spanning the physical, biological, social, and medical sciences. Four additional faculty were recently elected to the NAS, three in mathematics and one in chemistry. You can read more about their research on page 17.

While research proceeds apace despite this year’s multiple challenges, we are also engaged in community-wide conversations and sweeping action on issues of belonging, dignity, and justice in the school and across MIT. If you haven’t yet read the Institute’s Diversity, Equity, and Inclusion action plan, please visit: deiactionplan.mit.edu.

We in the School of Science are in the process of hiring an assistant dean for diversity.* This position will be one of six at the Institute — one in each school and the College of Computing — and will report directly to me with a dotted line to the Institute Community and Equity Office. Having a dedicated professional guiding our efforts to create a more inclusive MIT will be key to making the better world we all want to see here at MIT and beyond.

With my very best wishes and hope for the future,

*Note that the Summer 2021 issue of Science@MIT was already at press when the ICEO announced the hire of Kuheli Dutt, the School of Science’s new Assistant Dean for Diversity, Equity, and Inclusion. Read more at MIT News, published June 28, 2021.