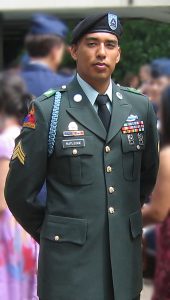 Omar Rutledge served as a US Army Infantryman in the 1st Armored and 25th Infantry Divisions. He was deployed in support of Operation Iraqi Freedom from March 2003 to July 2004. Photo courtesy of Rutledge.

A car backfires in a parking lot. An army veteran, recently returned from a combat zone, might duck and cover. They know that they are no longer in an active war zone, but they were trained to react before thinking, an ability that meant life over death at one point in their life.

That training is so ingrained it has physically altered the way their brain works, weakening the connection between the amygdala, which is responsible for emotions like fear, and the prefrontal cortex, which regulates or controls these emotional responses.

How post-traumatic stress disorder (PTSD) — a mental condition caused by a severe psychological shock that leaves persistent symptoms such as anxiety, depression, sleep disturbance, and even physical pain — affects the brain and its functions is the focus of graduate student Omar Rutledge’s research in the Department of Brain and Cognitive Sciences. He is uniquely situated to study this topic, having been deployed to Iraq himself from March 2003 to July 2004, resulting in firsthand experience with PTSD.

Rutledge, a third-year PhD candidate, is looking at ways to specifically prevent situations in which acting on a triggering event before thinking is no longer a useful survival skill. For example, when our brains sense fear, they send signals that may temporarily alter our skin to conduct electricity more easily — think of the infamous polygraph, or lie detector test. In the future, a device like a watch could measure this skin conductance and send an alert allowing the wearer to prioritize managing their response to the triggering event, such as breathing more slowly instead of ducking behind an object, effectively retraining the brain to be less responsive to triggering events.

Though Covid-19 has put some aspects of this research on hold, the pandemic has inspired another project based on the need for social distancing. Rutledge wants to test whether the loneliness caused by physical distancing protocols can induce physical or chemical changes in the brain similar to changes affiliated with PTSD.

Imagine walking down the street at night. Someone else approaches from the other direction. If someone is accompanying you, that new person is likely not evaluated as a threat. When you are by yourself? “Most likely,” he asserts. The longer humans are alone, the more other people become perceived as threats.

“There’s this hypervigilance that occurs in loneliness, and there’s also something very similar that occurs in PTSD — a heightened awareness of potential threats. The combination of the two may lead to more adverse reactions in people with PTSD,” says Rutledge, who is the 2020–2021 recipient of McGovern Institute for Brain Research’s Michael Ferrara graduate fellowship provided by the Poitras Center for Psychiatric Disorders Research, a fellowship made possible by the many friends and family of Michael Ferrara.

Work has already been done at MIT to investigate shortterm loneliness’ effect on the brain on a social level. In his future research plans, Rutledge said he hopes to explore whether and how chronic loneliness causes cognitive impairment. From there, further investigation could determine if loneliness has a deeper impact on veterans who have PTSD.

From war zone to campus

After making the seemingly impossible transition back from Iraq into civilian life in the United States, Rutledge turned to psychology to learn more about what he was experiencing, earning a bachelor’s degree in psychology from the University of Alaska at Fairbanks in 2012. To his dismay, he found little had been done to truly understand the nature of combat-associated PTSD.

For a broken bone, a doctor diagnoses the problem via X-ray, develops a plan to correct the issue, employs the necessary steps for repair, and then evaluates if the treatment succeeded. There is no analogous process for mental disorders.

“We can’t scan your individual brain and come up with a list of things that we can do to improve your situation. There’s nothing like that,” Rutledge says. “But that doesn’t mean we can’t try. That’s something that’s been on my mind since the very beginning.” He went on to earn a master’s degree in biomedical imaging at the University of California at San Francisco, which he completed in 2015.

For his next step, he planned to pursue a doctorate in a neuroscience program in order to go beyond understanding what is physically happening in the brain and begin to tie the brain to the mind using various tools. But he never imagined being able to do this work at MIT.

A new kind of mission

Rutledge’s firsthand combat experience has enabled studies into PTSD with veterans to go deeper despite dredging up painful memories. “Even though I may be reopening my own wounds by listening to others share their stories, if I can help other veterans heal, I feel it’s worth it. In the process, it makes me a little bit stronger as well,” he says.

Last year, Rutledge received a James S. (1972) and Muguette Alder Fellowship, which is awarded annually to a graduate student in Brain and Cognitive Sciences working on bipolar disorder and related diseases or, more broadly, mental illness, and is sponsored by a gift from Jim and Muguette Alder.

With Rutledge now a part of the “Gab Lab,” John Gabrieli, the Grover Hermann Professor of Health Sciences and Technology, Cognitive Neuroscience Professor in the Department of Brain and Cognitive Sciences, and member of McGovern Institute, has someone who can advocate for PTSD research at MIT.

“I feel like it has been a mission of mine to do this kind of work,” explains Rutledge. “In the world of PTSD research, I look to my left and to my right, and I don’t see other veterans, certainly not a former infantry guy. If there are so few of us in this space, I feel like I have an obligation to make a difference for all who suffer from the traumatic experiences of war.”