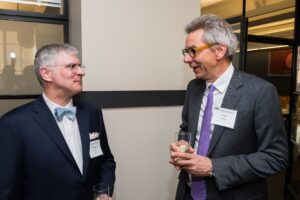 In early 2021 Peter Fisher, head of the Department of Physics, was named the Thomas A. Frank (1977) Professor of Physics, a newly endowed chair made possible by the generosity of alumnus Tom Frank.

When asked how it felt to be a chair holder, Fisher said, “I like it. I like that I actually know Tom, and I do feel honored to be the Thomas A. Frank (1977) Professor of Physics.”

About the same age, Fisher and Frank grew up on different U.S. coasts: Fisher in Marin County, California, and Frank on Staten Island, New York. Both men share a love of programming, computers, and ultimately, physics.

As youngsters, both Fisher and Frank played with early hobbyist computers. Fisher had an HP-65 programmable handheld calculator and thrilled to the magnetic cards that allowed him to program. Frank had a Rube Goldberg machine, a DigiComp I that fired his imagination, and still has his battered and worn PDP-11 handbook. (Frank and Fisher say they both agree that DEC’s PDP-11 was the best 32-bit computer ever made.)

In the sixth grade, Frank decided he would attend MIT when he grew up, and, eventually, he did so. Fisher applied to MIT after reading an MIT Technology Review article on the Institute’s hunt for the Loch Ness Monster, but he did not get in. Instead, he attended the University of California at Berkeley, and studied engineering physics, although he was really more interested in computing. His love of computers led him to high-energy physics. Why? “Because they had the best computers,” Fisher says.

When Frank matriculated to MIT, he first checked out the Center for Theoretical Physics (CTP). Although he developed a relationship with Professor Francis Low, CTP director, he ultimately chose experimental particle physics. In 1977, Frank completed his bachelor of science degree, and subsequently a PhD under the supervision of Professor Dick Yamamoto, a physicist whose work revealed the interactions of subatomic particles. Yamamoto worked on many experiments at Fermilab in Batavia, Illinois, where Frank spent much of his time as well, saying he found that “they still believed it was 1945 — that physicists could do everything.”

At other labs such as CERN, there were slews of engineers that built things for you; but at Fermilab, notes Frank, “you had to do it all yourself. Anything I wanted to learn about, I could.” Fisher also has a passion for particle physics, being recruited to MIT by Nobel Laureate Samuel Ting in 1994; and Fisher also worked closely with Yamamoto. For the past 25 years, Fisher has been on a relentless search to detect dark matter.

For his part, Frank realized halfway through his graduate program that an academic career was not for him. In his last year, he interviewed with a few banks; and then was introduced to Thomas Peterffy, a digital trading pioneer who wanted to put Wall Street on a chip. On the way to the interview, Frank says he read a book about stock options — but it didn’t really matter. “We talked for hours about everything but options and then he offered me a job on the spot,” Frank says of his conversation with Peterffy, founder and chairman of the Interactive Brokers Group. Frank joined Interactive Brokers in 1985 with his newly minted doctorate from MIT; and since 1999 has been the company’s executive vice president and chief information officer.

Everyone agrees that appointing Fisher as the inaugural Thomas A. Frank (1977) Professor of Physics is a great match. Nergis Mavalvala, dean of the School of Science, says she thinks Fisher is one of MIT’s unsung heroes. “When the pandemic forced us to send people home, it was Peter who offered a lifeline to the community through his daily email letters of encouragement, compassion, and true leadership.”

In addition to the professorship, Frank has been supporting physics graduate students with fellowships for almost two decades. For Frank, he says, “it is a privilege to be able to contribute to the great things happening in the Physics Department at MIT.”

This article first appeared in the 2021 issue of Physics@MIT.