Researchers from across the School of Science benefit from the John W. Jarve '78 Seed Fund for Science Innovation 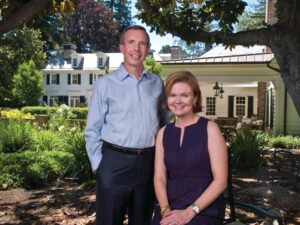 Seed funding may be something that comes up more often when talking about startups and tech companies, but it’s just as important at a university. Internal funding provided by the Institute’s schools helps researchers get projects off the ground and collect preliminary data to secure external funding from agencies such as the National Science Foundation and the National Institutes of Health (NIH) down the road. Just as with a startup, seed funding is an investment in projects and faculty that can encourage innovation and facilitate future success.

John W. Jarve ’78, SM ’79 a venture capitalist, knows the value of seed funding. Jarve is currently founder and CEO at Sierra Point Capital in Atherton, California. He’s also a partner emeritus at Menlo Ventures, one of the first venture capital firms in Silicon Valley. He is life member of the MIT Corporation and former president of the MIT Alumni Association. Jarve and his wife Jacque are also lifelong boosters for the MIT School of Science. Among his philanthropic efforts, Jarve has established scholarships for undergraduate students and endowed a professorship held by Associate Dean Rebecca Saxe in Brain and Cognitive Sciences.

Through the Jarve Seed Fund for Science Innovation established in 2019, the Jarve family has provided seed funding to support more than 20 research projects across the school. The most recent awardees and their seed fund projects are listed below.

Polina Anikeeva is a professor in Brain and Cognitive Science, with joint appointments in Materials Science and Engineering and at the McGovern Institute for Brain Research. Her research focuses on developing new materials and devices to modify the signals moving between the brain, spinal cord, and throughout the nervous system. Anikeeva is using her seed funding to better understand the physical and chemical interactions between the brain and gut in Parkinson’s disease.

Bonnie Berger is the Simons Professor of Math, with a joint appointment in Electrical Engineering and Computer Science, and a pioneer in the field of computational molecular biology. She used seed funding to expand her research using computational techniques, like deep learning, to help detect cancer-causing mutations within the human genome. The work Berger accomplished led to a peer-reviewed publication and several awards, including a featured plenary talk at the American Society of Human Genetics Conference in 2021.

Eliezer Calo, assistant professor of biology, studies ribosomes, the small particles found within cells that help create biological proteins and coordinate the activities of RNA, the single strand cousin of DNA. He’s interested in how cells build these particles and how mutations in RNA can lead to disorders like cancer. With his seed funding, Calo used zebra fish to understand how ribosome function varies across different kinds of cells and whether that variety might affect how RNA is translated into proteins. The results from his study helped the lab secure a larger NIH grant to continue this work.

Joseph Davis, the Whitehead Assistant Professor of Biology, researches the mechanisms through which cells build and destroy the complex molecular machines inside them, including autophagy. Autophagy is when cells create a new structure to help destroy material around the cell as needed to maintain stability; and when autophagy fails, it can lead to diseases like Parkinson’s and Alzheimer’s. Seed funding has allowed Davis to apply new biochemical techniques to identify various proteins involved in autophagy as a first step toward understanding how those proteins function during the process and how they can fail.

James DiCarlo is the Peter de Florez Professor of Neuroscience in the Department of Brain and Cognitive Sciences and director of the MIT Quest for Intelligence. He’s using seed funding to investigate what role the amygdala plays in how humans react to stimuli and how that part of the brain determines the intensity and emotion of a reaction. DiCarlo has also used the funding to recruit a postdoctoral scholar, Alina Peter, and purchase equipment for the lab to begin a new project directly recording physiological reactions.

Mircea Dincă, the W. M. Keck Professor of Energy in the Department of Chemistry, creates and describes new chemical materials that can be used, among other applications, for energy conservation and storage and biotechnology. With seed funding, the Dincă lab has created an inventory of one-dimensional lattices held together by relatively weak electric forces. By identifying the diversity of properties of these new materials and how they evolve and interact with each other, he’s developing easier methods to build nano-scale wires that can efficiently transport heat and electricity.

Ronald Fernando Garcia Ruiz, an assistant professor of physics, was jointly awarded seed funding with his postdoc, Shane Wilkins. The Garcia Ruiz lab uses laser spectroscopy to examine the radioactive properties of small atoms and molecules. With their seed funding, Garcia Ruiz and Wilkins are using those same radioactive particles to investigate the nuclear reactions that create new chemical elements within stars.

Brent Minchew is an assistant professor in Earth, Atmospheric and Planetary Sciences and holds the Cecil and Ida Green Career Development Professorship. He is a geophysicist who uses geodetic data to understand glaciers, including how they respond to climate change, evolve over time, and shape the broader landscape. Minchew was awarded seed funding to improve projections of sea-level rise using machine learning of glacier dynamics.

Keith Nelson, the Haslam and Dewey Professor of Chemistry, researches the collective rearrangement and movement of all the molecules and ions within solid objects. With seed funding, he is expanding his work to understand a process known as “second sound,” in which heat doesn’t slowly diffuse through a space, but moves like a wave of light, leaving one space and transferring entirely to another. With seed funding, Nelson has been able to observe second sound at temperatures well above what’s previously been recorded, with the eventual goal of observing second sound at near-room temperatures.

Matthew D. Shoulders, associate professor of chemistry, does research at the intersection of chemistry and biology, illuminating the complex processes that help maintain the stability of proteins within cells. He is starting to develop new technology to actively control and direct the evolution of long stretches of DNA to help target mutations. Seed funding has also allowed Shoulders to secure external funding and explore the possibility of spinning off a company to pursue the commercial applications of this research.

Xueying Yu was previously the C. L. E Moore Instructor in Math and is now a postdoctoral scholar at the University of Washington. Yu’s research looks at the behavior and solvability of what’s called the nonlinear Schrödinger equation, which describes the path taken by light waves. Her seed funding led to several publications in peer-reviewed journals and facilitated fruitful collaborations between Yu and researchers at partner institutions.

This article first appeared in the Winter 2022 issue of Science at MIT.