A renewed home for the MIT Mathematics Department 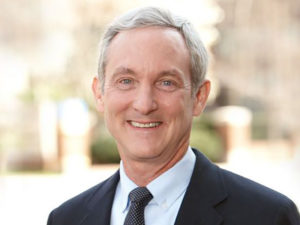 Ann Beha Architects, the firm hired to renovate Building 2, devised a plan to provide the mathematicians with the extra space they needed in addition to the renovation of their ageing offices and meeting rooms. The plan called for adding a fourth floor to the historic Bosworth Building. The faculty thought the design both brilliant and beautiful and the city of Cambridge approved. However, that fourth floor addition called for additional dollars that the Institute didn’t feel it had. Determined to do everything possible to see that the mathematicians got what they needed, Mike Sipser, then Head of the Department of Mathematics visited with his friend and colleague, Tom Leighton Ph.D. ’81, Professor of Applied Mathematics and CEO of Akamai Technologies.

“Until Mike Sipser became Department Head, the department really hadn’t spent much energy or time on fundraising. With Mike, it was different. He raised money for graduate students and for faculty chairs and he wanted to do more.”

Leighton and his wife, Bonnie Berger PhD ’90, Professor of Applied Math and Computer Science at MIT and Head of the Computation and Biology group at MIT’s Computer Science and AI Laboratory, agreed to support the renovation if their gift would, indeed, enable the department to get the renovation they truly wanted. The commitment made by Leighton, Berger and Leighton’s father, David T. Leighton ’48 SM ’53, to this effort was the impetus that propelled the fourth floor addition.

“Although the department was already a great Mathematics Department with absolutely great people,” Leighton said, “the renovation made it a much more welcoming physical environment in which to work.” Leighton is convinced the new facility “will make it much easier to recruit faculty and students. It also demonstrated the administration’s commitment to the department. Best of all, the renovation brought in much more light and beautiful open spaces with terrific views of the Charles River.”

In addition to running Akamai, which he says, “was not part of his original master plan,” Leighton will be teaching 18:062, Mathematics for Computer Science this fall. Asked about the difference between being a professor and running a major company, Leighton answered that it is, indeed, very different. However, mathematicians think in a very rigorous way and computer science is about efficiency and scaling, so it seems like all roads have led Leighton to where he is today. The School of Science is very appreciative of Tom Leighton, Bonnie Berger, and David T. Leighton’s support and wish the family continued success.

Update: The renovation of Building 2 was completed in 2016, just in time for the building’s 100th anniversary. Read the full story at MIT News.