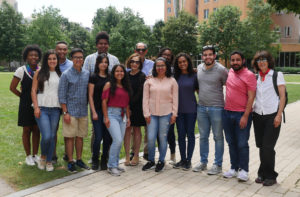 When you get a call offering you the chance to get involved in research at MIT, says Squire Booker PhD ’94, as he did when he was a student back home in Beaumont, Texas, with no summer plans, you don’t say no. This is how he joined seven other students from around the United States as the first class in the MIT Student Research Program (MSRP), even though the start date was only days away. “I was given the opportunity to get out of Texas, the opportunity to go to a big cosmopolitan city, the opportunity to go to MIT. So, I got a plane ticket and flew up a few days later,” says Booker.

Thirty-three summers later, back on campus to deliver the doctoral graduation ceremony speech, where he had lunch with several current members and fellow alumni of the program, Booker insists that he has no regrets with his decision.

Booker was one of three from that inaugural class who remained at MIT to pursue a PhD to continue the research he started during the program. He was incredibly fortunate, he notes, to get a “perfect match” placement, working with former professors of biology Bill Johnson and Chris Walsh on a project that aligned with his interests of combining chemistry and biology. He didn’t have much more of an idea of his preferred area of study than that.

Prior to arriving at MIT, given the lack of exposure to science, he didn’t know what research entailed, or what scientists did every day. But he says he quickly fell in love with the subject and his research group, even joining their summer lab softball team.

Although Walsh left MIT the year Booker was accepted as a PhD student, he easily shifted into the lab of Novartis Professor of Chemistry Emeritus JoAnne Stubbe, a new faculty member at the time, who was also working on the interface of chemistry and biology and provided the amount of hands-on support he needed as a new graduate student. “Ever since leaving the lab, she’s been my number one supporter,” he says of Stubbe.

Stubbe and her research inspired the direction Booker’s education took. He continues to conduct research revolving around proteins and catalysis reactions as a professor at Penn State University and a principal investigator with the Howard Hughes Medical Institute. Now, he heads a large lab group himself.

From mentee to mentor

Booker oversees an average of 10 group members at any given time, not including undergraduate students. Like his mentor, he tries to be very hands-on, resorting to email when he’s traveling — which is often. He admitted with a chuckle that his students keep track of where he is at any given time by following his Twitter account. Always trying to find ways to include motivated students who approach him about contributing to his research, the only time Booker turns them away is for their benefit — if they have a full course load and additional time on research will overload their schedules. He even considers high school students.

The first high school student to join his lab was Martin McLaughlin ’15, who Booker describes fondly as “aggressively motivated” and “trembling with excitement to do research.” Within the first week, McLaughlin was taking the initiative to use his lunch breaks from school to bike to Booker’s lab. Martin’s results, which were published in Science in collaboration with Professor Cathy Drennan in the MIT Department of Biology, introduced Booker into a new niche: crystallography.

When McLaughlin asked to continue working on the discovery with Drennan as an undergraduate at MIT, he didn’t hesitate to agree. McLaughlin had moved into Drennan’s lab a week into his first semester.

Not all students share this drive to delve into research. Like Booker himself, many aren’t even aware of possibilities to get involved in science and consider a career in research. It’s still hard, he says, even though “people are more serious about this diversity thing,” as he calls it, than when he was first starting his education.

Booker tries to reach out, especially to other minority students, through several programs, much like the MSRP, an invaluable program. While on campus this past spring, Booker met with current and past MSRP students.

One of those students was Jeandele Elliot, a chemical engineering student at Howard University from Saint Lucia in the Caribbean, who is working in the Jing-Ke Weng Lab in the Department of Biology this summer on a molecule that can protect pollen grains. For her, meeting Booker was another connection the program affords her. “The MSRP program has been beneficial to me in a special way since it has connected me with people I can really relate to,” she said.

The advice he gave to Elliot, and the others in the same position he was in once, was to prepare for exciting careers. The program is not just a steppingstone into research, he proclaimed, but it places participants with the best mentors and being privy to the best frontiers. Booker was delighted that some of the 25 current and past participants then attended MIT for graduate school as he did.

Tsehai A.J. Grell PhD ’18, a current chemistry graduate student in Drennan’s research group and an alumnus of MSRP, calls Squire Booker a “labhold” name — a household name in the lab. “As an African-American professor of biochemistry, an alumnus of my department, and a leader in my field, he instantly became one of my role models,” Grell said. “This was further solidified when I found out that he was a part of the first cohort of MSRP students, the summer research program which is responsible for me enrolling in MIT’s graduate program.”

Grell reminisced on his experience and the spring luncheon with Booker. “Because MSRP was such a foundational experience in my career, I am always enthused to interact with the current MSRP cohort and to encourage them to make the most of this opportunity, as it can be a pivotal summer in their careers,” says Grell. In addition, he said, “the excitement of the students is palpable and contagious. It reenergizes me and gives me purpose.”

Elliott, Grell, and Booker are three of more than 800 students from institutions with limited research opportunities who have participated in the MSRP, which was divided into two subcategories in 2003: general and biology, the latter of which has hosted 450 students. Since 2003, the MRSP-Bio program has been administered by Mandana Sassanfar, a biology lecturer in charge of the Department of Biology’s diversity and outreach programs. Since then, nearly 70 MSRP alumni have, like Booker, continued their research as graduate students at MIT.

Bernard “Bernie” Gould ’32, who received his BS from MIT, was a longstanding and beloved biochemistry professor in the Department of Biology, well known for being an incredibly dedicated mentor to biology and pre-med students at MIT for nearly 40 years. His wife, Sophia Gould CMP ’48, shared his passion for counseling students. To honor this investment in encouraging student learning, the Goulds’ son, Michael, and his wife, Sara Moss, founded the Bernard S. and Sophia G. Gould Fund in 2016. Gould is a philanthropist and the retired chairman and CEO of Bloomingdales. Moss is the vice chairman of Estée Lauder Companies. The Gould Fellow Fund sponsors students, such as Elliott, in MSRP-Bio. Each year, Gould and Moss return to the MIT campus to meet with students benefitting from their support.

Recently, the couple has designated a second fund, which will aid in extending the academic careers of students interested in the life sciences by providing support for MSRP-Bio alumni entering into the MIT biology graduate program.

Six of the 16 Gould Fellowship alumni who have graduated from college have already been admitted to MIT as graduate students. “This is an exceptionally high rate by any standards, which demonstrates the amazing success of this initiative,” says Sassanfar. “Gould Fellows are truly grateful for the generosity of Mike and Sara and are very eager to succeed and give back to their communities,” a goal that is always stressed by the founders.

With successful role models from previous MSRP cohorts, like Booker, combined with philanthropy from those like Gould and Moss, who believe strongly in supporting the education of our next generation of scientists, students are given the opportunity to thrive.

This article was also posted to MIT News.