Meet the 2019 tenured professors in the School of Science 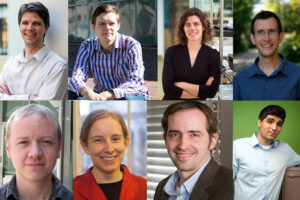 In the School of Science, eight faculty members have been granted tenure by MIT in the Departments of Biology, Chemistry, Earth, Atmospheric and Planetary Sciences, Mathematics, and Physics.

William Detmold’s research within the area of theoretical particle and nuclear physics incorporates analytical methods, as well as the power of the world’s largest supercomputers, to understand the structure, dynamics, and interactions of particles like protons and to look for evidence of new physical laws at the sub-femtometer scale probed in experiments such as those at the Large Hadron Collider. He joined the Department of Physics in 2012 from the College of William and Mary where he was an assistant professor. Prior to that, he was a research assistant professor at the University of Washington. He received his BS and PhD from the University of Adelaide in Australia in 1996 and 2002, respectively. Detmold is a researcher in the Center for Theoretical Physics in the Laboratory for Nuclear Science.

Semyon Dyatlov explores scattering theory, quantum chaos, and general relativity by employing microlocal analytical and dynamical system methods. He came to the Department of Mathematics as a research fellow in 2013 and became an assistant professor in 2015. He completed his doctorate in mathematics at the University of California, Berkeley, in 2013 after receiving a BS in mathematics at Novosibirsk State University in Russia in 2008. Dyatlov spent time after finishing his PhD as a postdoctoral fellow at the Mathematical Sciences Research Institute before moving to MIT.

Mary Gehring studies plant epigenetics. By using a combination of genetic, genomic, and molecular biology, she explores how plants inherit and interpret information that is not encoded in their DNA to better understand plant growth and development. Her lab focuses primarily on Arabidopsis thaliana, a small flowering plant that is a model species for plant research. Gehring joined the Department of Biology in 2010 after performing postdoctoral research at the Fred Hutchinson Cancer Research Center. She received her BA in biology from Williams College in 1998 and her doctorate from the University of California, Berkeley, in 2005. She is also a member of the Whitehead Institute for Biomedical Research.

David McGee performs research in the field of paleoclimate, merging information from stalagmites, lake deposits, and marine sediments with insights from models and theory to understand how precipitation patterns and atmospheric circulation varied in the past. He came to MIT in 2012, joining the Department of Earth, Atmospheric and Planetary Sciences, after completing a NOAA Climate and Global Change Postdoctoral Fellowship at the University of Minnesota. Before that, he attended Carleton College for his BA in geology in 1993 to 1997, Chatham College for an MA in teaching from 1999 to 2003, Tulane University for his MS from 2004 to 2006, and Columbia University for his PhD from 2006 to 2009. McGee is the director of the MIT Terrascope First-Year Learning Community, a role he has held for the past four years.

Ankur Moitra works at the interface between theoretical computer science and machine learning by developing algorithms with provable guarantees and foundations for reasoning about their behavior. He joined the Department of Mathematics in 2013. Prior to that, he received his BS in electrical and computer engineering from Cornell University in 2007, and his MS and PhD in computer science from MIT in 2009 and 2011, respectively. He was a National Science Foundation postdoctoral fellow at the Institute for Advanced Study until 2013. Moitra was a 2018 recipient of a School of Science Teaching Prize. He is also a principal investigator in CSAIL and a core member of the Statistics and Data Science Center.

Matthew Shoulders focuses on integrating biology and chemistry to understand how proteins function in the cellular setting, including proteins’ shape, quantity, and location within the body. This research area has important implications for genetic disorders, neurodegenerative diseases such as Alzheimer’s, diabetes, cancer, and viral infections. Shoulders’ lab works to elucidate, at the molecular-level, how cells solve the protein folding problem, and then uses that information to identify how diseases can develop and to provide insight into new targets for drug development. Shoulders joined the Department of Chemistry in 2012 after earning a BS in chemistry and minor in biochemistry from Virginia Tech in 2004 and a PhD in chemistry from the University of Wisconsin at Madison in 2009. He is also an associate member of the Broad Institute of MIT and Harvard, a member of the MIT Center for Environmental Health Sciences.

Tracy Slatyer researches fundamental aspects of theoretical physics, answering questions about both visible and dark matter by searching for potential indications of new physics in astrophysical and cosmological data. She has developed and adapted novel techniques for data analysis, modeling, and calculations in quantum field theory; her work has also inspired a range of experimental investigations. The Department of Physics welcomed Slatyer in 2013 after she completed a three-year postdoctoral fellowship at the Institute for Advanced Study. She majored in theoretical physics as an undergraduate at the Australian National University, receiving a BS in 2005, and completed her PhD in physics at Harvard University in 2010. In 2017, Slatyer received the School of Science Prize in Graduate Teaching and was also named the first recipient of the school’s Future of Science Award. She is a member of the Center for Theoretical Physics in the Laboratory for Nuclear Science.

Michael Williams uses novel experimental methods to improve our knowledge of fundamental particles, including searching for new particles and forces, such as dark matter. He also works on advancing the usage of machine learning within the domain of particle physics research. He joined the Department of Physics in 2012. He previously attended Saint Vincent College as an undergraduate, where he double majored in mathematics and physics. Graduating in 2001, Williams then pursued a doctorate at Carnegie Melon University, which he completed in 2007. From 2008 to 2012, he was a postdoctoral researcher at Imperial College London. He is a member of the Laboratory for Nuclear Science.