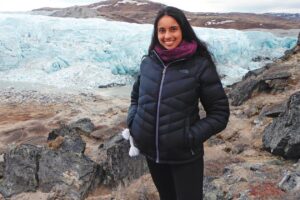 From above, Antarctica appears as a massive sheet of white. But if you were to zoom in, you would find that an ice sheet is a complex and dynamic system. In the Department of Earth, Atmospheric and Planetary Sciences (EAPS), graduate student Meghana Ranganathan studies what controls the speed of ice streams — narrow, fast-flowing sections of the glacier that funnel into the ocean. When they meet the ocean, losing ground support, they calve and break off into icebergs. This is the fastest route of ice mass loss in a changing climate.

Looking at the microstructure, there are many components that can affect the speed with which the ice flows, Ranganathan explains, including its interaction with the land the ice sits on, the crystalline structure of the ice, and the orientation and size of the grains of ice. And, unfortunately, many models do not take these minute factors into consideration, which can impact their predictions. That is what she hopes to improve, modifying the mathematics and building models that eliminate assumptions by fleshing out the details of exactly what is happening down to a microscopic level.

Ranganathan is equipped to handle such a topic, holding a bachelor’s degree in mathematics from Swarthmore College where she generated food chain models to investigate extinction levels. She left her undergraduate studies with a “desire to save the world” and knew she wanted to apply her knowledge to climate science for her graduate degree. “We’re one of the first generations that grew up hearing about the climate crisis, and I think that made quite an impact on me,” she says. It’s also a “sweet spot,” she claims, in terms of being both a scientifically invigorating problem — with a lot of mathematical complexities — and a societal issue: “My desire to use math to discover things about the world, and my desire to help the world intersect in climate science.”

A climate of opportunity

EAPS allowed Ranganathan the flexibility to choose her field of focus within the wide range of climate science. “EAPS is a great department in diversity of fields,” she says. “It’s rare for one department to encompass so many aspects of earth and planetary sciences.” She lists faculty addressing everything from hurricanes to climate variability to biological oceanography and even exoplanetary studies. “Even now that I’ve found a research focus, I get to learn about other fields and stay in touch with current research being done across the earth sciences,” she adds.

Flexibility is something she also attributes to her fellowship. Currently, Ranganathan is sponsored by the Sven Treitel Fellowship, and it’s this support that has allowed her the opportunity to develop and grow her independence, transitioning from student to researcher. “Graduate school is arguably not necessarily to learn a field, but rather to learn how to build on your own ideas,” she explains. Without having her time consumed by writing grant proposals or working on other people’s funded projects, she can divert her full attention to the topic she chooses. “This fellowship has really enabled me to focus on what I’m here to do: learn to be a scientist.”

The Sven Treitel Graduate Student Support Fund was established in 2016 by EAPS alum Arthur Cheng, Sc.D. ’78 (XII) to honor Sven Treitel ’53, SM ’55, PhD ’58. “Sven Treitel was a visiting professor at MIT when I was a graduate student and he was a great role model for me,” says Cheng. Treitel’s contributions to making seismograms more accurate are considered instrumental to bringing about the “digital revolution” of seismology.

Currently in her third year, Ranganathan has passed her qualifying exam and is now fully devoted to her project. That includes facing some challenges in her research, like producing new models or, at least, new additions to preexisting models to make them suitable for ice streams. She also worries about what she calls a dearth of data needed to provide her model some benchmarks. Her excitement isn’t deterred, though, and she’s invigorated by the prospect of self-directing how she tackles these technical obstacles with input from her advisor, Cecil and Ida Green Career Development Professor Brent Minchew.

During the COVID-19 crisis, Ranganathan appreciates the EAPS Department and her advisor for ensuring that events and check-ins remain a regular occurrence in addition to prioritizing mental health. Although she has adjusted her hours and workflow, Ranganathan believes she has been relatively lucky while MIT campus has limited access. “My work is quite easy to take remote, since it is entirely computer-based work. So, my days haven’t changed too much, with the exception of my physical location,” she notes. “The biggest trick I’ve learned is to be okay with everything not being exactly the same as it would have been if we were working in person.”

Ranganathan still meets with her office mate every morning for coffee, albeit virtually, and continues to find encouragement in her fellow lab group-mates, whom she describes as smart, driven and diverse, and brought together by a love for ice and glaciers. She considers the EAPS students in general a warming part of being at MIT. “They’re passionate and friendly. I love how active our students are in science communication, outreach, and climate activism,” she comments.

The co-president of the WiXII (Women in Course 12 group), Ranganathan is well-versed in communication and outreach herself. She enjoys writing – both fiction as well as journalism – and has previously contributed articles to Scientific American. She uses her writing as a means to elevate awareness of climate issues and generally focuses on the interplay between climate and society. Her 2019 TEDx talk focused on human relationships with ice — how the last two decades of scientific study has completely changed how society understands ice sheets.

Amazingly, all of Ranganathan’s knowledge of earth science, climate science, and glaciology, she has learned since joining MIT in 2017. “I never realized how much you learn so quickly in graduate school.” She hopes to continue down a similar track in her future career, addressing important aspects of glaciology that still need answers. She might want to try fieldwork someday. When asked what’s left to accomplish, she joked, “Do the thesis! Write the thesis!”