Field geology at a distance 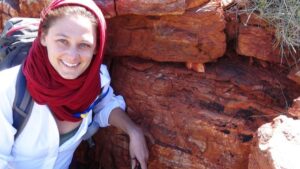 Tanja Bosak, who studies the processes by which rock formations were produced in ancient environments, stands in front of some of the oldest stromatolites in the Pilbara region of western Australia during an astrobiology tour in 2013. Photo courtesy of Tanja Bosak.

Life is shaped by the environment in which it lives. When looking at an organism today, that relationship can be easily observed. But when all you’re left with is a fossil or rock, it can be tricky to identify the environment in which it formed, let alone the life forms that might have left their mark in that sample. Geobiologist Tanja Bosak now faces additional
challenges as she searches for signs of early life on Mars. “Mars is different. There are a lot of factors to consider. It’s a great challenge. It’s just fun to do; once we can do this for Earth, we can really set up the conditions for Mars.”

Scientists first need to backtrack what Mars might have been like in the past and then what life might be expected in those conditions. This requires taking into account the different kinds of rocks and atmosphere seen on our
neighboring planet today — and then estimating whether these aspects were the same billions of years ago. “It’s just a completely new, bigger direction,” she says.

A physicist during her undergraduate years in Croatia, Bosak was interested in big systems. After a brief stint as a meteorologist, she found the perfect field during her PhD at Caltech that combined her love for systems geology with biology’s intriguing variations in organisms and evolution. Now a geobiologist in the MIT Department of Earth,
Atmospheric and Planetary Sciences, Bosak works to reveal processes that preserve microbial fossils and rocks made or shaped by microbes in the geologic record.

“We work to understand the chemical conditions under
which microbes make certain minerals or fossilize in certain ways,” she explains, “because that helps us understand and reconstruct what the environment was like.” On Earth, for example, cyanobacteria are linked to a rise in oxygen in the atmosphere, which, in turn, altered ocean chemistry, and thus, affected the formation of marine minerals.

On NASA’s Mars 2020 mission, Bosak is the co-leader of a team of 14 Returned Sample scientists from the United States, Canada, and Europe. Once Perseverance, the newest martian rover, arrives at its final destination — a location that was chosen after extensive discussion in terms of both exploration and the logistics of landing — this group is charged with identifying the best samples to collect.

This is what sets this rover apart from its predecessors; its purpose is not to analyze. It is designed to sample and cache the rocks it encounters, ready for a subsequent mission to return them to Earth. Like the Apollo 11 mission, this is the first step in an attempt to bring a bit of our
celestial neighbors to Earth.

Perseverance launched this summer and is expected to land in Jezero Crater in February 2021. Based on satellite imagery, Jezero Crater appears to be a dried lakebed. “We have a habitable environment — we have a lake. We have all the sediments that are known to preserve the signs of life on Earth,” says Bosak. The rover will examine the geologic remnants of a river delta with clay mineral deposits that might contain biosignatures, as well as an apparent shoreline where carbonate rocks, which are much more
common on Earth, may have precipitated in the lapping lake water’s edge.

The Perseverance rover is prepped for the mission’s four main science objectives: studying Mars’ geologic history, looking for signs of ancient life, collecting ideal samples for future research, and testing technologies for future use. Although the rover is armed with several instruments to carry out these objectives, there are a lot of complications to performing research on Mars.

On Earth, Bosak is used to bringing her notebook with her, sketching out the area she’s sampling and making notes, and then matching those notes to the samples that she bags. “When you get to the rock or outcrop, there’s a lot of orientation that happens, a lot of description that we do automatically,” Bosak explains. “But we won’t be able to because there will be instruments that we actually have to call on to do that for us.” The team must also determine how to document the samples. It’s field geology with a twist.

Bosak will be monitoring the rover’s traverse out of the crater, which is about 50 kilometers in diameter, deciding on the best and most diverse samples to collect. Emphasis is on the diversity. The scientists must ensure they have a wide array of material for analysis back on Earth.

And they must make their decisions quickly. “We’ll have to move faster,” she says. Unlike the Curiosity rover, which is still going strong well beyond its nominal mission, they will not have as much time to spend on details at any particular site.

During its prime mission, which is one Martian year — around two years on Earth — the team aims to choose 30 to 35 samples from Jezero Crater to bring back to Earth. Equipped with 43 sample tubes, the rover has the space to pick up a few extra samples from beyond the rim of the crater if it lasts longer than the prime mission. Bosak is hoping for the possibility that the rover can venture into this unexplored terrain.

A sample of the unknown

Despite the difficulties of remote field work on another planet, Bosak is excited. Unlike Earth, which suffers from the recycling of surficial materials by plate tectonics and weathering by an active water cycle, Jezero Crater, which is almost 4 billion years old, remains untouched by geologic activity.

“The surface of Mars is way older than anything that is preserved to such exquisite detail on Earth. This gives us a window into the time when life may have been taking hold,” explains Bosak, “not just on Earth but on Mars too.”

If no evidence for microbial life is found in a setting that has been known to foster life on Earth, scientists will have just as many questions to contemplate as they would with a positive identification. “We can’t ever say there was no life, but with samples returned to Earth, we would be able to say whether, in this particular environment, there seemed to be any. If not, that’s a puzzle,” Bosak says.

Once the rover has cached all the samples and the team members have recorded the geology, it will be time to bring those pieces of Mars back to Earth for close inspection. A return mission is being planned by NASA to complete the intended round-trip project.

When asked if her research group might consider requesting small samples of the rocks she is helping to select once they have been brought back on Earth, she laughed. “That’s ten years from now.” Though she has several potential analyses in mind, depending on the specific samples that are collected, a mission this complex requires focusing one step at a time. “Right now, we’re making sure the best samples are collected.”