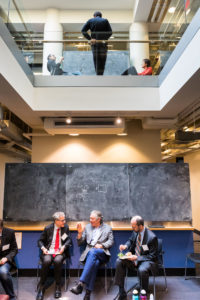 The celebration of 50 years of physics at the CTP featured speakers that included former students, postdocs, and faculty as well as some current CTP faculty members. Some of the key topics explored at the symposium included gravitational waves, black holes, dark matter, neutron stars, and nuclear physics; dualities and symmetries in string theory, condensed matter physics, and quantum field theory; quantum information and computing; and the foundations of quantum physics. Presentations on recent work in these areas were interspersed with historical perspectives and recollections of the CTP’s last 50 years, discussion and videos illustrating the current activities in the CTP, and speculations regarding future directions in theoretical physics.

“In its 50 years, the CTP has seen its faculty, postdocs, and students make discoveries that have advanced our theoretical understanding of how the universe works,” said Michael Sipser, dean of the School of Science, in his introductory comments. “Now we have a new group of young faculty poised to make discoveries into the nature of the universe in areas such as dark matter — the unknown substance that comprises more than 80 percent of the matter in the universe.”

George Fai from the Office of Nuclear Physics in the U.S. Department of Energy (DOE) began the afternoon sessions, reading a congratulatory letter from Timothy Hallman, the associate director of the DOE Office of Science. Fai’s remarks were followed by commentary from Laboratory for Nuclear Science (LNS) director Bolek Wyslouch. The CTP is a part of LNS, and Wyslouch commented on the increased level of collaboration between young faculty in nuclear and particle physics, in both theoretical and experimental work.

The recent observation of gravitational waves from mergers of black holes and neutron stars by the LIGO experiment (for which MIT’s Rainer Weiss received the 2017 Nobel Prize in Physics) occurred more than 100 years after Einstein’s development of the theory of general relativity, which predicts gravitational waves that carry energy across space. This observation has in turn stimulated new developments in theory. Chung Pei-Ma SB ‘93 PhD ‘96, who is now the Judy Chandler Webb Professor of Astronomy and Physics at the University of California at Berkeley, described new progress in identifying supermassive black holes at the centers of distant galaxies, and the prospects for detecting gravitational wave signals from mergers of these objects. Sanjay Reddy, a former CTP postdoc who is now a professor at the Institute for Nuclear Theory at the University of Washington, described how combined gravitational and electromagnetic signals from a neutron star merger observed late last year have provided important new information that helps describe nuclear matter at the highest achievable densities, as well as how heavy elements such as gold and platinum are produced in the universe. 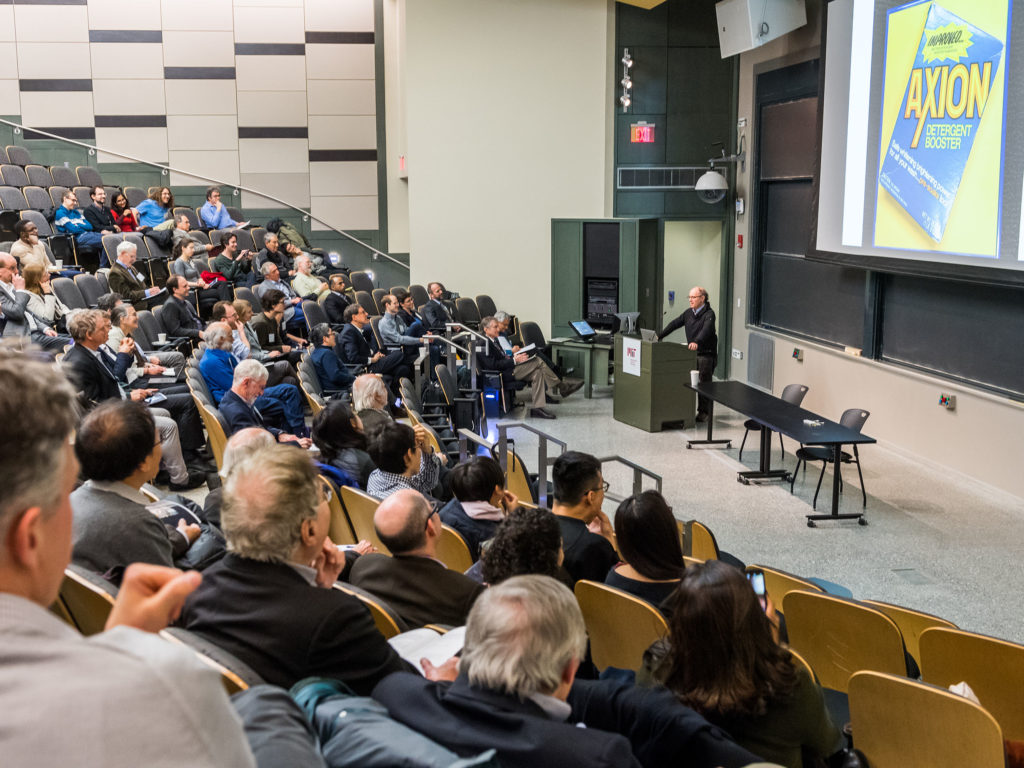 Nobel laureate Frank Wilczek presents his lecture on the “Symmetries of Time” and the naming of the axion particle. Credit: Justin Knight

The mystery of dark matter, which constitutes roughly 80 percent of the mass density of the universe, also provided substantial material for discussion. Nobel laureate Frank Wilczek gave an entertaining talk about how he named the “axion” particle, which is a likely dark matter candidate, after a laundry detergent. Former CTP faculty member Lisa Randall, now the Frank B. Baird Jr. Professor of Science at Harvard University, spoke about some new ideas about dark matter, in particular about dark matter particles that may interact with one another. CTP faculty members Will Detmold, Tracy Slatyer, and Jesse Thaler, as well as experimentalist Lindley Winslow from LNS, were featured in the premiere of a new video directed by Bill Lattanzi on efforts at MIT to understand and discover dark matter.

Another theme at the symposium was the development of new approaches to understanding quantum field theories, combining methodology from string theory with insights from condensed matter physics. Former CTP postdoc Dam Son, who is now a University Professor at the University of Chicago, described a new theoretical description of a fractional quantum Hall fluid, a special topological state of matter, in terms of composite fermions with equivalent (dual) descriptions in which a particle density in one description becomes a magnetic field in the other, and vice versa.

Former MIT Pappalardo Fellow David Tong, a professor of theoretical physics at Cambridge University, using methods motivated from string theory, showed how this was just one among a web of dualities, permitting descriptions of condensed matter systems in terms of very different kinds of field theories, and how these dualities are giving new insights into the structure of quantum field theory in general. Another former Pappalardo Fellow, University of Michigan professor of physics Henriette Elvang, showed how a different novel approach to quantum field theory based on scattering amplitudes can place strong constraints on what kinds of effective theories of low-energy excitations can be consistent in the presence of broken symmetries, relating to the famous work of emeritus CTP faculty member Jeffrey Goldstone in 1961 that led to the Higgs mechanism and the standard model of particle physics. Frank Wilczek also described new ideas about broken time symmetries in quantum field theory, leading to new states of matter called “time crystals” that may lead to new kinds of precision sensors.

Quantum theory — including quantum computing, quantum information, connections to quantum gravity, and its foundations — was another focal point of interest at the symposium. Andrew Childs ’04, now professor of computer science at the University of Maryland, described efficient methods for simulating quantum physics on quantum computers. Bill Lattanzi also premiered a second new video featuring CTP faculty members Daniel Harlow and Aram Harrow and their work on quantum error correction and black hole physics and the connections between these ideas. CTP professor Alan Guth spoke on the Cosmic Bell Experiment, a test of quantum entanglement, and Einstein’s “spooky action at a distance,” which makes use of some of the oldest light in the universe to address a loophole in previous experiments to test the foundations of quantum theory.

Finally, a panel on the future of theoretical physics featured a lively engagement among the most recent generation of CTP faculty, including professors William Detmold, Aram Harrow, Daniel Harlow, Tracy Slatyer, and Jesse Thaler. Some of this discussion focused on the way in which current developments in theory are bringing together once disparate disciplines such as string theory, field theory, nuclear physics, and condensed matter theory in new ways, and ways in which theoretical physicists are getting more closely involved with experiment as large amounts of data become available from particle physics and astrophysics observations. Another theme was the increasing role of large-scale computing in theoretical physics, from lattice QCD, which uses large computers to solve difficult problems of nuclear interactions; to machine learning, which is increasingly used in theoretical and experimental physics; and quantum computing, which may, as Richard Feynman originally suggested, eventually be the most effective way of analyzing real or hypothetical quantum systems. 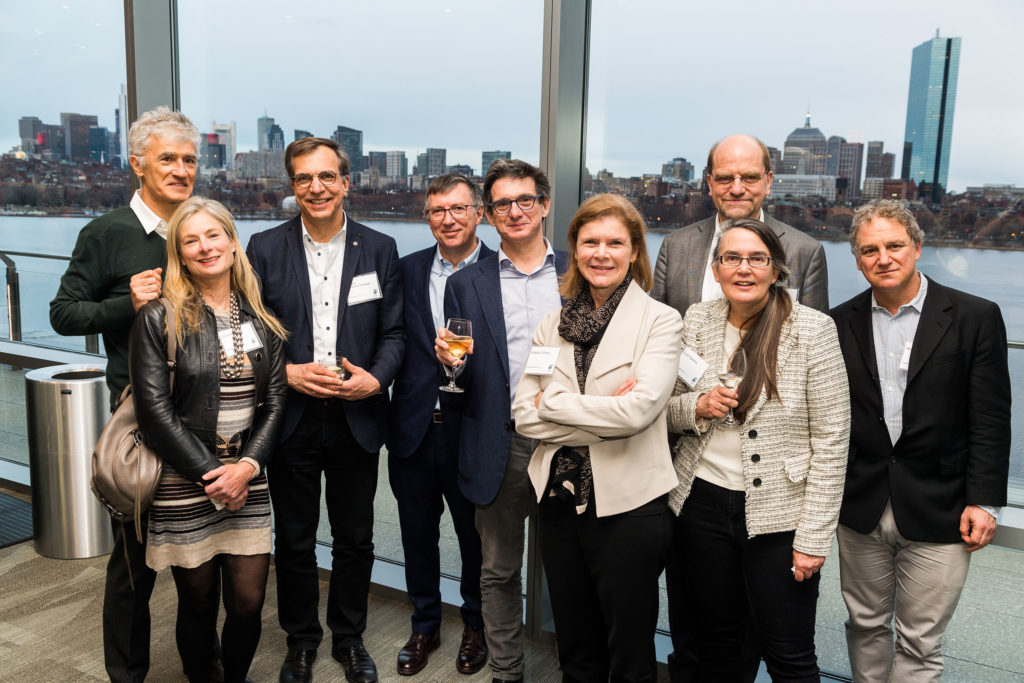 At a celebratory dinner following the conference held at the Samberg Center, several speakers commented on different aspects of the CTP history and culture, including Ernest Moniz, Cecil and Ida Green Professor of Physics and Engineering Systems, Emeritus. Moniz served as a CTP faculty member, department head for physics, director of the MIT Energy Initiative, and U.S. Secretary of Energy under President Barack Obama. He emphasized the commitment to social responsibility that has played an important role in the CTP and strongly influenced his career. This ranged from the involvement of CTP founders Herman Feshbach and Francis Low with the Union of Concerned Scientists, which decried military research at MIT and sought to aid silenced researchers behind the Iron Curtain like Andrei Sakharov, to recent examples such as the newly released book “The Physics of Energy” by the CTP’s former director Robert Jaffe and its current director Washington Taylor, which gives a unified perspective on physics through the theme of energy and its role and impact on our world.

The full version of this article appeared on MIT News on March 28, 2018.