Growing demand for an energy transition could move the needle, but not far enough 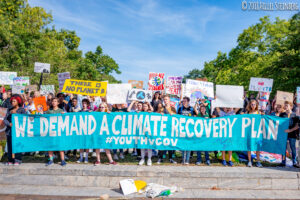 Protestors call for a climate recovery plan at the DC Youth Climate Strike 2019 at the U.S. Capitol (Photo courtesy of Hillel Steinberg)

Like many of its predecessors, the 2021 United Nations Climate Change Conference (COP26) in Glasgow, Scotland, concluded with bold promises on international climate action aimed at keeping global warming well below 2 degrees Celsius, but few concrete plans to ensure that those promises will be kept. While it’s not too late for the Paris Agreement’s nearly 200 signatory nations to take concerted action to cap global warming at 2 C — if not 1.5 C — there is simply no guarantee that they will do so. If they fail, how much warming is the Earth likely to see in the 21st century and beyond?

A new study by researchers at the MIT Joint Program on the Science and Policy of Global Change and the Shell Scenarios Team projects that without a globally coordinated mitigation effort to reduce greenhouse gas emissions, the planet’s average surface temperature will reach 2.8 C, much higher than the “well below 2 C” level to which the Paris Agreement aspires, but a lot lower than what many widely used “business-as-usual” scenarios project.

Recognizing the limitations of such scenarios, which generally assume that historical trends in energy technology choices and climate policy inaction will persist for decades to come, the researchers have designed a so-called growing pressures scenario that accounts for mounting social, technological, business, and political pressures that are driving a transition away from fossil-fuel use and toward a low-carbon future. Such pressures have already begun to expand low-carbon technology and policy options, which, in turn, have escalated demand to utilize those options — a trend that’s expected to self-reinforce. Under this scenario, an array of future actions and policies cause renewable energy and energy storage costs to decline; fossil fuels to be phased out; electrification to proliferate; and emissions from agriculture and industry to be sharply reduced.

“Few, if any, previous studies explore scenarios of how piecemeal climate policies might plausibly unfold into the future and impact global temperature,” says MIT Joint Program research scientist Jennifer Morris, the study’s lead author. “We offer such a scenario, considering a future in which the increasingly visible impacts of climate change drive growing pressure from voters, shareholders, consumers, and investors, which in turn drives piecemeal action by governments and businesses that steer investments away from fossil fuels and toward low-carbon alternatives.”

In the study’s central case (representing the mid-range climate response to greenhouse gas emissions), fossil fuels persist in the global energy mix through 2060 and then slowly decline toward zero by 2130; global carbon dioxide emissions reach near-zero levels by 2130 (total greenhouse gas emissions decline to near-zero by 2150); and global surface temperatures stabilize at 2.8 C by 2150, 2.5 C lower than a widely used business-as-usual projection. The results appear in the journal Environmental Economics and Policy Studies.

Such a transition could bring the global energy system to near-zero emissions, but more aggressive climate action would be needed to keep global temperatures well below 2 C in alignment with the Paris Agreement.

“While we fully support the need to decarbonize as fast as possible, it is critical to assess realistic alternative scenarios of world development,” says Joint Program deputy director Sergey Paltsev, a co-author of the study. “We investigate plausible actions that could bring society closer to the long-term goals of the Paris Agreement. To actually meet those goals will require an accelerated transition away from fossil energy through a combination of R&D, technology deployment, infrastructure development, policy incentives, and business practices.”

The study was funded by the government, foundation, and industrial sponsors of the MIT Joint Program, including Shell International.

This article first appeared in MIT News on March 1, 2022.