Building the foundation for climate science at MIT 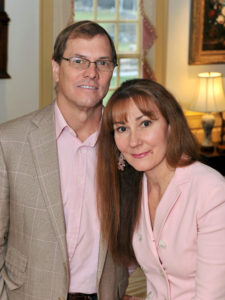 Since retiring from his position as Vice President of Innovation at Schneider Electric in 2014, MIT Corporation member Neil E. Rasmussen SM ’80, has been kept busy through his philanthropy and contributions of time and knowledge across the Institute. Rasmussen is passionate about trying to make a difference in the world in ways both local through his mentorship in the MIT Venture Mentoring Service and global through his support of climate and energy research at MIT and the Center for Microbiome Informatics and Therapeutics, a joint venture between MIT and Massachusetts General Hospital to advance the understanding of the microbiome’s role in human biology. He also plays an active leadership role in MIT’s Campaign for a Better World, and serves as a member of four Visiting Committees spanning the Schools of Science, Engineering, and Humanities and Social Sciences.

As a Visiting Committee member of the Department of Earth, Atmospheric and Planetary Sciences (EAPS), Rasmussen and his wife Anna Winter Rasmussen have become staunch supporters of the department’s climate research program. Rasmussen firmly believes that building fundamental knowledge of the workings of the Earth’s climate system is a crucial step on the path towards effective action on climate change. To build this knowledge base, the Rasmussens have supported graduate students in climate science for several years, and they endowed the Norman C. Rasmussen Fellowship Fund in 2014, named in honor of Neil’s late father, professor emeritus of Nuclear Science and Engineering and head of that department from 1975 to 1981. The Rasmussens have supported 14 climate fellows in EAPS so far, including three new students this academic year.

Now, the Rasmussens have decided to take their support for climate science one significant step further with a generous gift to support the creation of state-of-the-art laboratories for EAPS climate scientists and students.

“We are so indebted to Neil and Anna for their timely support,” said Robert van der Hilst, the Schlumberger Professor of Earth and Planetary Sciences and department head of EAPS. “Not only are we able to recruit top students to EAPS to study climate science thanks to the Rasmussen fellowships, but soon we will be able to offer a new suite of modern wet labs for them to work in. This will enhance our ability to recruit and retain the very best faculty and students in climate science, whether they be experimentalists or theoreticians.”

Intent on helping EAPS solve its shortage of wet lab space — a problem that was threatening to impact future recruitment efforts — the Rasmussens stepped forward with a commitment of $3 million to help EAPS secure 12,000 square feet of lab space in Building 4. This generous early commitment will enable EAPS and MIT to refurbish space now occupied by the chemistry undergraduate labs once they are relocated to the new MIT.nano building.

The wet lab renovation is part of a comprehensive plan developed by the Institute to address EAPS thorny space issues. In addition to new labs in Building 4, the plan calls for renovations inside the Cecil and Ida Green Building, and the construction of an “Earth and Environment Pavilion” adjacent to the Green Building. The pavilion will transform the wasteland of chipped concrete at the building’s base and replace the wind tunnel and the de facto parking lot with an exciting new portal to the building, with valuable program space for collaborative programs.

The proposed pavilion will house MIT’s Environmental Solutions Initiative alongside EAPS, and invite the MIT community to learn and join forces to find solutions to some of the world’s critical environmental challenges.

“Even with the technology and know-how to tackle climate change, nothing will be done until there is the political will to solve the problem. And as the consequences of inaction become more evident, having fundamental scientific knowledge about the climate system, and good people working to solve the problem, is going to make all the difference,” said Rasmussen. With new space on the horizon, MIT will be able to recruit the best faculty and students to work on climate issues for decades to come — and to share their discoveries with the world to help guide policy and ensure a more sustainable future.