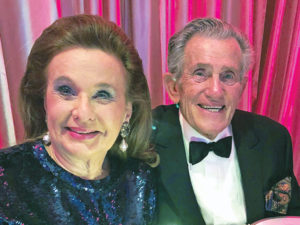 Robert and Renee Belfer have long supported MIT’s research programs in degenerative diseases of the brain such as Alzheimer’s disease.

Alzheimer’s disease currently affects 5.2 million Americans and costs the country roughly $250 billion annually. With the aging of America’s population, the cost of care for people affected by Alzheimer’s is projected to reach more than $1 trillion a year by 2050. Aware of the growing prevalence of the disease and its attendant costs, the Belfers said they view Alzheimer’s as a national security threat — and they have renewed their commitment to ameliorating that with an additional gift to MIT’s Aging Brain Initiative.

From petroleum to philanthropy

Bob Belfer arrived in America at age seven in 1942, growing up in Brooklyn, New York with his “beloved Dodgers.” Belfer graduated from Columbia College in 1955 and the Harvard Law School in 1958. Renee and Bob married in 1960, and he began a long career with Belco Petroleum Corp., a Fortune 500 company, where he was president for 20 years.

Although Belfer spent his career in the exploration for and production of oil and natural gas, he says it is philanthropy that now predominately occupies his time.

“Our vibrant economic system greatly rewards successful entrepreneurs and these entrepreneurs should recognize their good fortune and bring their organization’s talents, as well as their financial support, to serve the common good,” he said. Five years ago, he did just that.

In 2012, a gift from the Robert A. and Renee E. Belfer Family Foundation created the Neurodegeneration Consortium (NDC), to advance the study and treatment of Alzheimer’s and other neurodegenerative diseases.

The NDC is a unique multi-institutional initiative based at the University of Texas MD Anderson Cancer Center that also encompasses the Picower Institute for Learning and Memory at MIT, Baylor College of Medicine, and Mount Sinai Hospital in New York. “The aim is to translate research findings into effective targeted drugs and diagnostics for patients while addressing quality-of-life issues and the financial challenges of treating and living with Alzheimer’s and other aging diseases,” said Belfer. The NDC has already borne fruit in the development of new therapeutic approaches.

Last year, with funding from the Belfer Family Foundation, Li-Huei Tsai, director of the Picower Institute for Learning and Memory, and her colleagues published research demonstrating that they could reverse memory loss in mice by interfering with the enzyme that forms a genetic blockade that causes cognitive decline.

Pharmaceutical companies had tried to develop treatments to block this enzyme, known as HDAC2, with limited success and many toxic side effects. Tsai and her team developed the method to precisely target HDAC2 using a large protein fragment to interfere with the  enzymatic function.

Although this research is ground breaking, it was Tsai’s other research program in restoring gamma wave function — and subsequent cognitive function — to the brains of mice that motivated the Belfers’ latest giving.

By using light flashing at precisely 40 Hz, Tsai has shown that cellular function can be restored in murine models to help remove amyloid plaques associated with Alzheimer’s disease and at least temporarily reverse cognitive decline.

The Belfers said they were excited by Tsai’s recent breakthrough. “Because of its noninvasive nature, this approach has great potential for an early breakthrough in Alzheimer’s therapy following years of failure by expensive efforts on the part of big pharma,” said Mr. Belfer. The Belfers said they are privileged to be able to support the MIT School of Science as a unique place to foster scientific discoveries and enhancements across wide and diverse areas of science, especially in diseases of aging.

“To enhance the quality of life in later years, as well as reduce costs, we need a national effort,” he said adding that efforts such as the NDC and MIT’s Aging Brain Initiative are needed in addressing this “urgent national problem.”