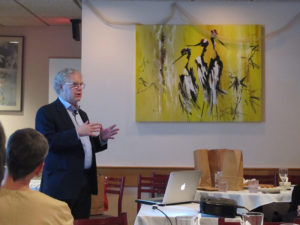 When Adlai Grayson ’09 introduced Alan Grossman at a recent MIT Club of Boston event, many of the career milestones Grayson shared were ones you would expect for a senior faculty member and accomplished administrator. Grayson noted that Grossman, Praecis Professor of Biology and Head of MIT’s Biology Department, received a BA in biochemistry from Brown University, earned a PhD in molecular biology from the University of Wisconsin at Madison, and, after a postdoctoral fellowship in the Department of Cellular and Developmental Biology at Harvard University, joined the MIT faculty in 1988. Grossman served as director or co-director of the Biology Department’s graduate program for several years. He helped start MIT’s interdepartmental graduate program in microbiology, serving as its founding Director, and later served as an Associate Department Head before becoming Department Head in August 2014.

One event in Grayson’s introduction stood out, however. In 2006, Grossman received a life-saving heart transplant, and in the decade since has rebuilt his laboratory and research efforts. The chance to hear about this experience, and its effects on Grossman’s family and his career, brought together dozens of MIT alumni and friends on a rainy night this past spring. They were graduates of the Schools of Science and Engineering, as well as the School of Humanities, Arts and Social Sciences (SHASS) and Sloan, and included PhDs, MDs, and MBAs. There was a cardiologist, a dermatologist, and a hospitalist, along with many from outside the medical profession. Everyone present, regardless of their background, came away with a better understanding of the lifesaving gift Grossman had received and how it continues to pay dividends today.

Offering perspective on organ and tissue donation and transplantation

Before sharing his own experiences as a heart transplant recipient, Grossman talked a bit about the experiences of those currently awaiting organ transplants. In 2015, there were more than 30,000 organ transplants in the United States. Of these, 2,804 were heart transplants. 2015 was a record-breaking year being the first in which more than 30,000 transplants were performed, but on the night of Grossman’s talk around 118,000 people in the United States were waiting for a lifesaving transplant. As Grossman reminded the audience, there are only two ways to come off a transplant waiting list: with a transplant or without one. Twenty-two people die each day waiting for a transplant.

Grossman was lucky. Although he spent about a year and a half on the waiting list, in May 2006 he received his new heart.

Grossman was not born needing a new heart, and never even thought he might need a new heart. He was in his 40s, a tenured faculty member, and married with a young son before he began having the heart troubles that ultimately led to a diagnosis of cardiac sarcoidosis. Sarcoidosis, a rare inflammatory disease that can affect almost any organ, causes heightened immunity, resulting in damage to the body’s tissues. The formation of granulomas, or clumps of inflammatory cells that group together, is a common feature of sarcoidosis, and these granulomas interfere with organ function. In the United States, the most commonly affected organs are lungs and lymph nodes, but sarcoidosis can also affect skin, eyes, liver, kidneys, muscles, bones, nervous system, and heart. The prevalence of sarcoidosis is about 1 in 100,000 persons in the United States and Europe. Of those, about 5% are cardiac sarcoidosis, although Grossman noted this number could be much higher. Cardiac sarcoidosis can be benign, but Grossman’s was life threatening, and the mortality rate was greater than 50%. Effects of cardiac sarcoidosis include heart block, where the electrical signal from the top chambers to the bottom chambers is blocked, congestive heart failure, where the heart still works but is unable to pump enough blood to meet the body’s needs, and arrhythmias, including ventricular tachycardia, which is a fast heart rate that starts in the ventricles and interferes with normal heart beats, compromising blood flow.

Grossman admitted he knew very little, if any, of this before July 3, 2002, the day he first began experiencing noticeable symptoms of heart block. To combat it, he was fitted with a pacemaker. A little over a year later, Grossman suffered a blood clot in the tip of his heart and began taking Coumadin. About six months later, a biopsy led to a diagnosis of cardiac sarcoidosis, and he was given an implantable cardioverter defibrillator (ICD) to combat his almost daily ventricular tachycardia. Nine months after that, Grossman was listed for a transplant. “I was coming to work and fairly functional until about September/October of 2004,” Grossman revealed, “and at that point I was acutely sick and couldn’t come to work.” Grossman was in and out of the hospital from the fall of 2004 until May 2006, spending about half that time hospitalized, and at one point spent about five and a half months in the hospital. That didn’t mean Grossman’s work couldn’t come to him. “When I was home, we were having lab meetings at my house. The lab would come once a week. At one point I was in the hospital and someone in my lab needed to give a talk. Everybody in my lab knows if they’re going to give a talk somewhere, they have to do a practice talk, so a grad student came to the hospital and did a practice talk one evening.” This approach benefitted Grossman as much as it helped the student. “It actually turned out to be really great,” Grossman shared, “because I had a roommate and after the student left from giving the practice talk, the roommate called the nurse and asked to switch rooms, so I ended up without a roommate.”

In May of 2006, Grossman received his new heart. Around three weeks later, he was sent home. By the fall of 2006, he was back to work full time.

Back to a new normal

After Grossman recounted his story, he opened the floor up to questions. Many focused on the impacts to his work and his family. “We published two papers during that time [I was away from work], which I am very proud of, because that was done entirely by the lab with me just doing a little bit while at home or in the hospital,” Grossman noted. He also assured everyone that he continues to live a full life today, with only a few minor restrictions. His research and position as Department Head keep him working more than full time, he is active with his family, he travels for work and for pleasure, and at least thinks about exercising regularly. He shared that his heart rate remains relatively constant due to the denervation involved in transplant, which puts some limitations on physical activity but also means no increased heartbeat during presentations. One other difference he has come to realize since his transplant: “I became much more patient about certain things and much less patient about other things. Some of the things I was less patient about I’ve had to recalibrate.” As an example, Grossman pointed to his lack of patience with people who whine about things. “Sometimes it’s, like, stop whining. It’s not a big deal. But it actually is to the person involved, and so it took me a little while to adjust to that. I think that was important for me to be able to serve as Department Head or Associate Head and to do those kinds of things.”

The evening ended with talk about organ donation itself, with Grossman plainly stating, “Organ donation is about life.” He underscored that when you donate organs you give someone a chance to live and that a family’s choice to donate during their time of tragedy is a choice for life for someone else, a choice that can even provide solace and promote healing for the donor family. He concluded by encouraging all those assembled to discuss organ donation with their family, to make sure their family was aware of their wishes, and to consider registering to be a donor. Donate Life New England has more information about how to support organ banks, donors, and transplant recipients.