A small way of saying thank you 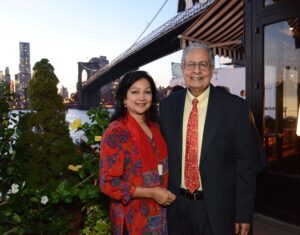 Tara and Victor Menezes, SM ’72. Photo: courtesy of the donors

“It might not change the world, but it does try to light a small candle.”

These are modest words from Victor Menezes, SM ’72, a Course XV alumnus who recently created the Victor J. Menezes (1972) Challenge Fund in Mathematics. These words reflect the heart of many in the School of Science community where an act of “lighting a small candle” often leads to creativity and exploration that may one day in fact change the world. The Menezes Challenge Fund in Mathematics will support the department’s outreach programs and create challenge opportunities for students from underrepresented backgrounds and underserved communities in the United States and elsewhere to support their goals of attending MIT and other top-ranked universities.

Victor Menezes was born and raised in India. After receiving his undergraduate degree in electrical engineering from the Indian Institute of Technology at Bombay, he traveled abroad for the first time.

On that trip, the first of his many around the world, he joined the masters of science program at the MIT Sloan School of Management with a focus on finance and economics. MIT in the 1970s was an evolving and exciting place to be; Professor Paul Samuelson had just won the Nobel Prize in economics; Professor Robert Merton had just started teaching; and Menezes enrolled in his first course in finance and options theory.

“There were quantitative luminaries and future Nobel Prize winners all around us,” says Menezes, who was thrilled to be a part of that community, harboring a belief that mathematics underpins finance, economics, and electrical engineering. It allowed him to flourish in his career.

After completing his SM in 1972, Menezes joined Citibank where he worked for 33 years, living with his wife Tara and their four children all over the world — India, New York, Manila, Hong Kong, Brussels, and finally New York again, where they reside for their retirement.

Menezes remained a close part of the MIT community throughout his career and is a Life Member of the MIT Corporation. When asked about his motivation for the creation of the Menezes Challenge Fund in Mathematics, he stated, “Mathematics was the bridge in my life. Math is the Latin that binds the modern world. I heard about the Math Department’s outreach programs, MathROOTS and PRIMES Circle, and it struck a chord. I thought they were wonderful. They encourage math development at the high school level in the United States and elsewhere when the support is most needed!”

Victor and Tara Menezes are grateful for the knowledge and friendships gained through MIT and are happy to offer their support. “Philanthropy is a very big word. Our support is a small way of saying thank you.”

This article appeared in the Winter 2021 issue of Science@MIT.