A gift that keeps on giving

Franklin Peterson, a former professor in the Department of Mathematics, and his wife Marilyn support graduate students at the Institute 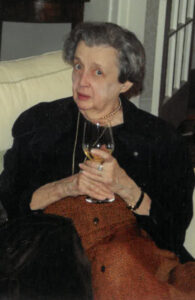 When a member within the MIT community gives back to the Institute, it speaks volumes. A generous and worldly couple with active social and intellectual lives, Frank and Marilyn Peterson always knew they would leave a portion of their estate to the institutions that were most meaningful to them. For former MIT Professor Frank Peterson, the Department of Mathematics was one of those places.

An internationally respected algebraic topologist, Frank specialized in the study of cohomology operations. The complex interplay between geometric and algebraic topology was a hallmark of his work, and many of the fundamental structures of both subjects bear his imprint.

Frank was a professor at MIT for more than 40 years. He was deeply involved not only in teaching and research but in the administration of the Mathematics Department. He served as chair of the hiring committee, as chair of the graduate admissions committee, and he co-created a seminar in algebraic topology – Frank’s area of specialty – with Edgar Brown, an emeritus professor of mathematics at Brandeis University, which continues to this day.

“Frank did everything. He was a wonderful administrator,” says Professor of Mathematics Haynes Miller, a colleague at MIT and a good friend of Frank’s. On top of the wide variety of ways in which Frank served the MIT community, he was approachable, friendly, and willing to answer even the simplest of questions. “He was a terrific optimist,” Miller recalls.

Frank’s service extended beyond MIT to the greater mathematics community. He acted as treasurer of the American Mathematics Society (AMS) for nearly 25 years. Despite Frank’s sensible business acumen, “he was a pretty informal guy,” remembers Miller, save for one exception: his old-school-professor look. Essential preparation before Frank walked in to give a lecture included affixing his signature bow tie.

“Frank Peterson’s joy in doing mathematics as an individual as well as with other people had a profound positive impact on the lives of many of his friends,” says Fred Cohen, Professor of Mathematics at the University of Rochester, in a November, 2001 notice to the AMS.

Frank and Marilyn made a great match, sharing an interest in adventure, good food, and good wine.
When he met her, Marilyn was working for the CIA. “She always kind of had that ‘spy’ background,” says Miller. But, while Frank focused on mathematics, Marilyn’s passion was studying shipwrecks, which took them on great escapades around the world.

Her dedication to this study led Marilyn to seek a home in Cambridge, Massachusetts near the Widener Library. She also took classes in paleography – the study of ancient writing systems and historical manuscripts – at the British National Archives in England nearly every summer. In order to investigate a particular shipwreck, she even spent time in northern Canada. Frank accompanied her on this trip but left early due to the harsh living conditions. Marilyn recalled to Miller that they had outhouses there, but one had to take a shotgun with them “because of the polar bears.”

By the ends of their lives, the financially conscious couple had amassed a large estate – and many lifelong friends. Frank Peterson passed away on September 1, 2000, and Marilyn Peterson joined him on July 6, 2014.

In honor of Frank, Marilyn reserved nearly a third of their trust to create the Franklin Peterson Mathematics Fund, a sum amounting to more than $2.3 million. The fund is endowed and available to the Department of Mathematics for discretionary use. Discretionary funding is essential to addressing the greatest needs of the department. In recent years, that greatest need has rung out loud and clear: graduate fellowships.

“We’ve always had around 120 [graduate] students here. It fluctuates a little bit. And what’s happened in the last 15 to 20 years is that the level of support of an NSF (National Science Foundation) fellowship has declined, especially relative to the actual costs at MIT. So, an increasing proportion of the department’s budget is going to supporting graduate students,” says Miller.

The Peterson gift has already supported seven graduate students and is slated to support an eighth student this fall.

“The Peterson Fund covered my tuition as a first year graduate student, allowing me to focus on classes and qualifying exams without the additional workload of teaching or grading,” says Jie Jun Ang, a third-year graduate student studying under Leighton Family Professor of Mathematics Scott Sheffield. He added that the fellowship made his transition to graduate school at MIT, including relocating to a brand-new city, much smoother.

The Franklin Peterson Mathematics Fund will continue to support graduate students into the foreseeable future, lessoning the burden both on the department as it strives to attract the best talent, and on our students as they start graduate work.

Kaavya Valiveti, a fourth-year graduate student studying under professor of mathematics Richard Melrose, expressed her appreciation directly to the couple. “If I could, I’d love to share the following message: Dear Frank and Marilyn, I would like to express my deepest gratitude to both of you for your support during part of my graduate studies, but more generally for your support of mathematics research at MIT over the past several years. People like you are truly one of the main reasons the Institute remains at the center of the highest levels of research all across the sciences and engineering, and continues to be such a rewarding, exciting place for graduate students like myself to study.”

Miller agrees with the sentiment. “It’s very significant when an individual does something of [this] scale, millions of dollars,” he says. And it comes straight from the heart. “[Frank] loved the department and devoted himself to it, and so did [Marilyn].”

This article appeared in the Summer 2020 issue of Science@MIT.