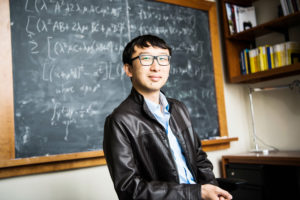 Yufei Zhao, the Class of 1956 Career Development Assistant Professor in the Department of Mathematics, has been named the second recipient of the MIT School of Science’s Future of Science Award. Zhao conducts research in discrete mathematics.

“Yufei has made tremendous contributions in combinatorics with applications to computer science,” says Michael Sipser, Dean of the School of Science and the Donner Professor of Mathematics. “He is an outstanding member of the School, doing excellent work on all fronts: research, teaching, service, and outreach.”

In other research accomplishments, Zhao contributed to a better understanding of the celebrated Green-Tao theorem that states prime numbers contain arbitrarily long arithmetic progressions. Zhao’s proof, co-authored with Jacob Fox, Zhao’s advisor and former professor in the MIT Department of Mathematics, and David Conlon at the University of Oxford, simplifies a central part of the proof, allowing a more direct route to the Green-Tao theorem. Their work improves our understanding of pseudorandom structures—non-random objects with random-like properties—and has other applications in mathematics and computer science.

For this research, the Society for Industrial and Applied Mathematics (SIAM) awarded Zhao the 2018 Dénes König Prize, given biennially to an early career researcher for outstanding research in discrete mathematics.

“Yufei exemplifies the best of our faculty members,” says Michel Goemans, Department Head of Mathematics. “He is a skilled, creative researcher who is also an outstanding teacher and mentor both in and outside the classroom.”

This year, Zhao taught a first-year advising seminar on mathematical problem solving in advance of the William Lowell Putnam Mathematics Competition, an annual mathematics contest for undergraduates in North America. Zhao, himself a three-time Putnam Fellow, helped advise the MIT team which took first place, together with five of the six Putnam Fellows this year (the highest individual scorers in the competition).