Female graduate students in the Department of Mathematics unite to encourage community and to extend an invitation to prospective MIT students. 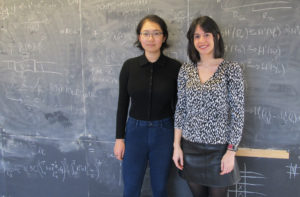 Boya Song (left) and Juncal Arbelaiz Mugica (right) are graduate students in the Department of Mathematics working toward a supportive community for women. Credit: Laura Carter

The group designed and relaunched the MIT Women in Mathematics website last fall. It became both a resource and a starting point of their efforts to organize and build a supportive community in mathematics at MIT and beyond. Graduate student Juncal Arbelaiz Mugica, a third-year doctoral student in mathematics, said she realized more was needed to promote and enable peer support.

“A doctoral program is a long and convoluted journey,” Arbelaiz says. “Graduate students can be greatly impacted by a sense of a belonging to a community, which can be more difficult for minority students to find. As a result, I wanted to make the women in mathematics aware that a network of peers is available to them, which the department has been very supportive of.”

Her idea: Form an active, student-led group for students already present and provide resources for women in mathematics who are interested in applying to MIT.

“It is crucial to recruit and attract more women at all levels in the department, but also that more of our women math majors consider going into graduate school in mathematics,” says Michel Goemans, department head and professor of mathematics. “Last year only 13 percent of our graduate applicants were women, and this is clearly not enough. The department is happy to support the activities of the MIT Women in Mathematics, and this group helps create a vibrant, supportive community in which more and more female students might pursue or continue a career in mathematics.”

Starting with a base unit

In the summer of 2018, Arbelaiz recruited fellow PhD students Boya Song and Kristin Kurianski, and approached Professor Gigliola Staffilani, an advocate for women in mathematics, a role model, and the founder of the original Women in Mathematics group and website.

They realized the first step was to provide a central source of information. A website already existed, but it was dated and inaccessible to mobile users. They recruited the help of Becky Ecung, who has been the webmaster for the Department of Mathematics for more than five years, to revitalize the website for mobile accessibility with a clean, fresh look. Ecung focused on two major goals the students proposed: The website must be a welcoming resource for prospective female mathematicians at MIT, and it must provide a central and easy-to-use location to post and advertise community events.

Their new website displays images from one such event, a dinner to kick-off the spring 2019 semester, and a calendar featuring upcoming opportunities. The simple pizza dinner hosted in the graduate student lounge on campus is an example of the group activities, which are the future focus of the group now that they have a solid foundation upon which to build.

Caesar Duarte, special projects administrator in the department, and Kristin Kurianski, another doctoral student in mathematics, designed the group’s logo.

Adding to their numbers

Staffilani first founded the Women in Mathematics group and created the original website with the help of former MIT Assistant Professor Katrin Wehrheim. Together they also initiated the Weeks lectures, named after Dorothy Weeks, the first woman to receive a doctorate from the Department of Mathematics in 1930.

Arbelaiz says she hopes to continue cultivating a relationship between the graduate students and undergraduates, who have a group called USWIM: the Undergraduate Society for Women in Mathematics. Last fall, WIM hosted a dinner, at which they candidly discussed aspects of continuing in a path of higher education, such as how to apply to graduate school and find the right graduate mentor. Professors, Arbelaiz noted with a laugh, were strictly forbidden from attending.

With their expanding group, they are now turning their attention toward inclusivity of anyone who might identify with the group. They also hope to collaborate with other local colleges, such as Harvard University.

“Currently about 35 percent of our math majors at MIT are women, but unfortunately the percentage among our graduate students is only 18, comparable to the national average for similar universities,” Goemans says. The most recent data released earlier this year from the National Science Foundation showed 28.5 percent of the doctoral recipients in mathematics and statistics were awarded to women.

Staffilani recalls that when she invited female mathematicians to speak with MIT women, sometimes the offer was declined. Invited academics preferred to be seen as “mathematicians” rather than be singled out as “female mathematicians,” separate from men. It’s a dilemma Staffilani says she understands; gaining extra notice as a woman — or any underrepresented group in a particular field — doesn’t feel like “equality,” she says. Others might feel that spending the extra time on affinity groups would be time better spent on research and their own careers.

Reminiscing about a workshop on gender parity at a conference she attended, Arbelaiz recalled that she was surprised when a female physicist asked the room, “Why do we want diversity?”

Hearing this, Staffilani responded without hesitation: “Because talent is everywhere and you want to cast your net wide.”