Inspired by jellyfish and octopuses, PhD candidate Juncal Arbelaiz investigates the theoretical underpinnings that will enable systems to more efficiently adapt to their environments 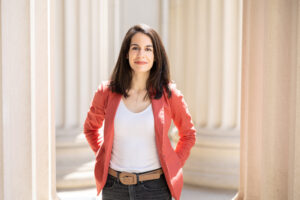 Inspired by jellyfish and octopus, Juncal Arbelaiz is an applied math doctoral recipient who is working on the fundamentals of optimal distributed control and estimation. Photo: Steph Stevens

Juncal Arbelaiz is a native of Spain, where octopus is a common menu item. However, Arbelaiz appreciates octopus and similar creatures in a different way, with her research into soft-robotics theory.

More than half of an octopus’ nerves are distributed through its eight arms, each of which has some degree of autonomy. This distributed sensing and information processing system intrigued Arbelaiz, who is researching how to design decentralized intelligence for humanmade systems with embedded sensing and computation. At MIT, Arbelaiz is an applied math student who is working on the fundamentals of optimal distributed control and estimation.

She finds inspiration in the biological intelligence of invertebrates such as octopus and jellyfish, with the ultimate goal of designing novel control strategies for flexible, soft robots that could be used in tight or delicate surroundings, such as a surgical tool or for search-and-rescue missions.

“The squishiness of soft robots allows them to dynamically adapt to different environments. Think of worms, snakes, or jellyfish, and compare their motion and adaptation capabilities to those of vertebrate animals,” says Arbelaiz. “It is an interesting expression of embodied intelligence — lacking a rigid skeleton gives advantages to certain applications and helps to handle uncertainty in the real world more efficiently. But this additional softness also entails new system-theoretic challenges.”

In the biological world, the “controller” is usually associated with the brain and central nervous system — it creates motor commands for the muscles to achieve movement. Jellyfish and a few other soft organisms lack a centralized nerve center, or brain. Inspired by this observation, she is now working toward a theory where soft-robotic systems could be controlled using decentralized sensory information sharing.

“When sensing and actuation are distributed in the body of the robot and onboard computational capabilities are limited, it might be difficult to implement centralized intelligence,” she says. “So, we need these sort of decentralized schemes that, despite sharing sensory information only locally, guarantee the desired global behavior. Some biological systems, such as the jellyfish, are beautiful examples of decentralized control architectures — locomotion is achieved in the absence of a [centralized] brain. This is fascinating as compared to what we can achieve with human-made machines.”

A fluid transition to MIT

Her graduate studies at the University of Navarra in San Sebastian led to her working with MIT Professor John Bush in fluid dynamics. In 2015, he invited Arbelaiz to MIT as a visiting student to investigate droplet interactions. This led to their 2018 paper in Physical Review Fluids, and her pursuit of a PhD at MIT.

In 2018, her doctoral research shifted to the interdisciplinary Sociotechnical System Research Center, and is now advised by Ali Jadbabaie, the JR East Professor of Engineering and head of the Department of Civil and Environmental Engineering; and School of Engineering Associate Dean Anette Hosoi, who is the Neil and Jane Pappalardo Professor of Mechanical Engineering as well as an applied math professor. Arbelaiz also regularly works with Bassam Bamieh, associate director of the Center for Control, Dynamical Systems, and Computation at the University of California at Santa Barbara. She says that working with this team of advisors gives her the freedom to explore the multidisciplinary research projects she has been drawn to over the past five years.

For example, she uses system-theoretic approaches to design novel optimal controllers and estimators for systems with spatiotemporal dynamics, and to gain a fundamental understanding of the sensory feedback communication topologies required to optimally control these systems. For the soft-robotic applications, this amounts to ranking which sensory measurements are important to best trigger each of the “muscles” of this robot. Did the robot’s performance degrade when each actuator only has access to the closest sensory measurements? Her research characterizes such a trade-off between closed-loop performance, uncertainty, and complexity in spatially distributed systems.

“I am determined to bridge the gap between machine autonomy, systems theory, and biological intelligence,” she says.

A two-year Schmidt Science Fellowship, which funds young researchers to pursue postdoctoral studies in a field different from their graduate work, will let Arbelaiz further explore the intersection of biological and machine intelligence after graduation.

She plans to spend her postdoc time at Princeton University with Professor Naomi Leonard, and to work with researchers in systems biology, computer science, and robotics, to explore the reliability and robustness of biological and artificial ensembles. Specifically, she is interested in learning how biological systems efficiently adapt to different environments so that she can apply this knowledge to human-made systems, such as autonomous machines, whose vulnerability to noise and uncertainty creates safety issues.

“I foresee an unprecedented revolution approaching in autonomous and intelligent machines, facilitated by a fruitful symbiosis between systems theory, computation, and [neuro] biology,” she says.

Arbelaiz grew up in Spain acutely aware of the privilege of having access to a better education than her parents. Her father earned a degree in economics through independent study while working to support his family. His daughter inherited his persistence.

“The hardships my parents experienced made them cherish autodidactism, lifelong learning, and critical thinking,” she says. “They passed on these values to me, so I grew up to be a curious and persevering person, enthusiastic about science and ready to seize every educational opportunity.”

In a desire to pass this on to others, she mentors STEM students who lack guidance or resources. “I firmly believe that we should promote talent everywhere, and mentoring could be the key driver to encourage underrepresented minorities to pursue careers in STEM,” she says.

An advocate for women in STEM, she was part of the executive committee of Graduate Women at MIT and MIT Women in Mathematics, and participates in various panels and workshops. She also runs live experiments for kids, such as at the MIT Museum’s Girls Day events.

“As scientists, we are responsible to share our knowledge, to inform the public about scientific discovery and its impact, and to raise awareness about the value of research and the need to invest in it.”

This interest in paying her STEM knowledge forward is something she credits to her MIT education. “MIT has been one of the best experiences of my life so far: it has brought enormous academic, professional, and personal growth,” she says. “I share MIT’s taste for collaborative and multidisciplinary research, the attraction to intellectual challenges, and the enthusiasm for advancing science and technology to benefit humankind.”

This article first appeared in MIT News on October 2, 2022.