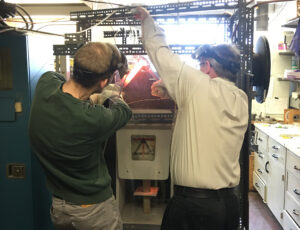 Max Collinet PhD ’19 (left) and Professor Tim Grove work together to extract an experimental sample from a one-of-a-kind rock-melting machine at MIT that reveals clues about planetesimals and the formation of the rocky planets like Earth and Mars. Photo: Stephanie Brown/MIT

Let’s start at the beginning. Before humans, before Earth, before any of the planets existed, there were baby planets — planetesimals. Coalesced from dust exploded outward by the solar nebula, these blobs of material were just a few kilometers in diameter. Soon, they too aggregated due to gravity to form the rocky planets in the innermost part of the solar system, leaving the early details about these planetesimals to the imagination.

Their mysterious identity is complicated by the fact that Mercury, Venus, Earth, and Mars are all different in chemical composition. Like a blender mixing the ingredients in a cake, Earth has undergone some rearrangement, largely due to volcanism and plate tectonics that shift elements into and out of the interior, that further obscures information about what the original ingredients might have been, and their proportions.

Now, a pair of MIT scientists in the Department of Earth, Atmospheric and Planetary Sciences (EAPS) have revealed some key information about those planetesimals by recreating in a laboratory the first magmas these objects might have produced in the solar system’s infancy. And it turns out, there’s physical evidence of these magmas in meteorites, adding validation to their claims.

“This formation and differentiation of these planetesimals is kind of an important step in how you make the inner terrestrial planets, and we’re really just starting to unlock that story,” says R R Schrock Professor of Geology Timothy Grove, senior author on the study, published in a trilogy of papers in the journals Geochimica et Cosmochimica Acta and Meteoritics and Planetary Science.

Tiny pieces of evidence of the solar system’s planetary building blocks exist to this day in meteorites, which all fit into two major categories. Chondrites are made of original material and are the most common type. Achondrites come from parent bodies that have experienced some sort of modification — and understanding those modifications helps explain the processes that form and grow planets.

Ureilites, the second most abundant group of achondrites, were the original subject of this investigation. But quickly, the researchers realized their findings could also be applied elsewhere.

Thanks to a series of experiments designed to correct errors in past techniques, Grove and lead author Max Collinet PhD ’19 uncovered a new angle. “We really came from wanting to understand something about a small group of meteorites that might seem obscure to a lot of people,” says Collinet of his doctoral research. “But then when we did those experiments, we realized that the melts we were producing have a lot of implications to a lot of other planetary building blocks.”

This includes the origin of the most abundant type of achondritic meteorites, called eucrites, presumed to come from Vesta, the second-largest body in the asteroid belt. This was because in 1970, an MIT researcher discovered that Vesta was made of the same type of basaltic rock. “We had all these basaltic lavas from the surface of Vesta, and basically everyone assumed that’s what happens when you melt these bodies,” explains Grove. But recently, other studies have overturned this hypothesis, leaving the question: What were the earliest melts formed in planetesimals?

“What we realized is that we did not really know at all what the composition was of those first magmas that were produced in any planetesimal, let alone the one that we were interested in — the parent body of ureilites,” says Collinet of the results from their new experimental methods.

In past studies, by using a typical experimental “open system” setup that maintained the low oxygen levels expected inside a planetesimal, much of the highly reactive alkali elements — sodium and potassium — could escape.

Grove and Collinet had to work together to carry out the experiments using a unique device at MIT that kept the system “closed” and retained all alkalis. They loaded a tiny metal capsule a few millimeters square with the same chemical elements that might be present in a planetesimal and subjected it to conditions of low oxygen, rock-melting temperatures, and pressures expected in the relatively small bodies’ interiors. Once those conditions were met, the sample’s magma was frozen — as recorded in their methods — by “whacking” the machine with a wrench to ensure their capsule popped free, dropping to room temperature quickly.

Analyzing the magma, cooled into a glass, was tricky. Because they were looking for the onset of melting, the pools inside the samples were quite small. It took a few adjustments to their procedures to get all the tiny pools to combine into one larger pocket. Once they were able to measure the samples, the pair were shocked at the implications of what they found.

“We had no idea that we were going to produce this stuff. It was completely unanticipated,” Grove marvels. “This stuff” was an alkali-rich granite — a light-colored, silica-rich composition like you might see on a kitchen countertop, on the opposite end of the rock-type spectrum from the alkali-poor, silica-poor basalts on Vesta — like those formed from lava in Hawaii.

“Collinet and Grove show that previous ideas about the compositions of the earliest melts in our solar system, ~4.6 billion years ago, may have been incorrect because the record of early processes has been obscured by geological activity in more recent times,” says Cyrena Goodrich, a senior research scientist at the Lunar and Planetary Institute in the Universities Space Research Association, who was not involved in the research. “These results will have applications to a wide range of topics in geology and planetary sciences and will substantially influence future work.”

These surprising results almost nearly matched melts measured in many natural meteorite samples. Additionally, the pair had learned something about the mysterious alkalis missing from the rocky planets and the differences between Earth, Mars, Venus and Mercury.

Previously, it was assumed dissimilarities between the terrestrial planets came about during the initial scattering of elements in the solar nebula and related to how those elements condensed from gases into solids.

“Now we have another way,” says Grove. With the melts hosting a lot of the alkalis, it would only take some method of melt removal to leave the residual planetesimals depleted in potassium and sodium.

The next step will be to determine just how these melts could be extracted from the planetesimals’ interiors, given that the drivers of magma movement in Earth would likely not be the same in these planetary bodies. In fact, migration of elements in early planets, such as the formation of metal cores, is a wide area of unknown that the pair of scientists are eager to continue exploring.

Due to the inability to observe what actually happened in the establishment of the solar system, the surprises exposed by this study are a significant step. “We bring new clues into how the nebula created these bodies,” summarizes Collinet, who is now a postdoc in Germany, working on understanding the layers beneath Mars’ outer crust. From a tiny capsule in a lab on the MIT campus or a microscopic droplet of melt in a meteorite, it is possible to reveal insight into the birth of a vast planet.