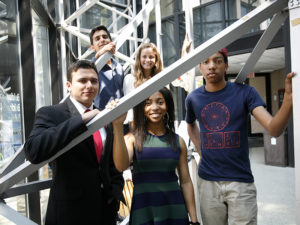 Launched this year by MIT’s Program for Research in Mathematics, Engineering, and Science (PRIMES) — an afterschool program for high school students — MathROOTS invited advanced high school students from underserved communities to develop their math skills at MIT. A total of 20 students spent 11 days at the Institute, learning to solve Math Olympiad-style problems, as well as being introduced to special topics in mathematics.

MathROOTS was designed to encourage highly talented minority and female students to persist in their passion for science, technology, engineering, and mathematics (STEM) fields through college and beyond; to give them a sense of belonging; and to expose them to the kinds of advanced math that will keep them inspired.

“I’m proud that MIT has introduced this wonderful program,” said Michael Sipser, the Barton L. Weller Professor of Mathematics and dean of MIT’s School of Science, which provided funding for this summer’s program. “MathROOTS offers the real possibility of changing the lives of its participants, and through them, their communities. I hope that it will become a permanent offering for future extremely talented students, such as the ones we had the privilege of hosting this year.”

MathROOTS student Sofía Dudas had already attended one math enrichment program near her home in Seattle. Before that experience, Dudas was excited to spend six weeks on a university campus learning advanced math with 19 other students who were good at it — giving her a taste of college academics and social life.

But when she got to the Washington campus, Dudas was one of only three girls in the program and the only Hispanic student. “I liked the math,” she said, but “I didn’t really connect with people. No one really talked to me for the first four weeks.”

But at MathROOTS, Dudas found a diverse group of students — and the deeper connection she had been missing previously. “We’re all math geeks here, and we all share the experience of being good at math, but also being the person who’s not supposed to be good at it,” she said. “Having this common tie has been really awesome.”

Before Dudas came to MathROOTS, she was hesitant about whether she should apply to MIT. She was worried that she wasn’t one of what she calls the “crazy geniuses” that she pictured attending MIT. Dudas was also worried that going to MIT would repeat her lonely experience at the math camp in Washington: She didn’t want to be the only Latina in the room again. Now that Dudas knows she’ll fit in at MIT, she said she will definitely apply for admission as an undergraduate. “This program opened some windows for me,” she said. “I realized if I work hard, I could be here.”

Quinton McArthur, the MathROOTS program director and Associate Director of Admissions at MIT, said that it is essential to keep these students engaged, “and let them know that the community is welcoming and that we’re invested in their excellence, just as we are in everyone else’s.”

Antonio Monreal, a MathROOTS participant from El Paso, Texas, relished the chance to deepen his knowledge of mathematics and to approach it in more creative ways. Back home, his classes focus on learning math processes by rote, rather than learning why he should use those processes or what the processes mean. Monreal said that at MathROOTS, “They teach you an idea and you have to approach it in your own way. It’s more like an art, instead of a boring systematic thing. This way your only limit is your own imagination in making a beautiful proof.” Students like Monreal — members of groups that are traditionally underrepresented on college campuses — often live in communities with limited access to courses in advanced math and science, as well as the kinds of enrichment programs that spark students’ interest in STEM fields and encourage them to pursue these fields after high school.

Pavel Etingof, a professor of mathematics and faculty advisor to MathROOTS, believes that the program can help close the gap. MathROOTS focuses on Math Olympiad-style problems because they build on the kinds of mathematics that students have most likely encountered, but require a very different problem-solving approach. Not only are Math Olympiad problems much more fun, Etingof said, but they demand creativity and rigorous thinking and encourage students to write proofs — challenges often missing from high school math.

“This is going to be an eye-opener for a lot of them,” Etingof said, “because they don’t have the opportunities back at home. If you want to build up representation in science and mathematics, we have to find these students and make sure that they get adequate exposure to math early in their lives.”

When Monreal returns to high school this fall, there will be no more formal math instruction for him to take: He completed his high school’s most advanced math class this past spring, and doesn’t know of any enrichment programs available to him outside school. “I know that I’m going to study a lot by myself, because I love math,” he said, “but there are no resources for me. I wish I knew about a program for people like me who don’t know what to do with talent or mathematical inclination.” Etingof would like to see more programs like MathROOTS around the country. “MathROOTS cannot reach all of the talented minority and female high school students — like Antonio and Sofía — who need to be encouraged to stay in STEM fields, but who lack opportunities to build on their talents,” he said.

MathROOTS was modeled after a training program at the University of the District of Columbia for the Pan African and Ibero-America Math Olympiads. The program only lasted 1 year, but some of its participants later became students at MIT, inspiring McArthur — and his colleagues Matt McGann and Stu Schmill in MIT’s Office of Admissions — to revive the program at MIT. Working with Sipser, they found a home for the new program at MIT PRIMES. MathROOTS students followed a curriculum designed and taught by head mentor Tanya Khovanova, an MIT lecturer in mathematics and the second woman to win the International Math Olympiad; and Yi Sun, a fourth-year mathematics graduate student and longtime competitor, and then tutor, in the Math Olympiad program. MIT PRIMES Director Slava Gerovitch serves as MathROOTS’s academic director.