Using elegant math to understand complex systems of the brain 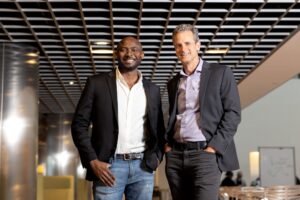 Caption:Lawrence Udeigwe (left) stands with James DiCarlo, the Peter de Florez Professor of Neuroscience and Udeigwe’s MIT host during his tenure as an MLK Visiting Professor.

It’s a tale familiar to many first-generation students: Neither of Lawrence Udeigwe’s parents had more than a sixth-grade education, and yet they were willing to sacrifice everything to educate their children.

“My dad,” Udeigwe says, “would tell us, ‘I’m ready to sell everything for you guys to go to school.’”

Udeigwe recounts that in Nigeria at the time, achieving the sort of success and stability his moved to the United States, enrolled at Duquesne University in Pittsburgh, and majored in computer science.

“But then I discovered math,” he says, and his dream of a programming job with the government back in Nigeria was replaced by something new.

Udeigwe has gone on to have a successful career as a professor of mathematics at Manhattan College in New York City, bridging disciplinary gaps between computation, pure math, and neuroscience. This year, Udeigwe is at MIT as a Martin Luther King (MLK) Visiting Professor and Scholar in the Department of Brain and Cognitive Sciences. He’s one of nine professors, in research areas ranging from art to engineering, selected for outstanding contributions in their fields to increase the presence of underrepresented scholars of color at MIT.

The journey to MIT for Udeigwe began in graduate school at the University of Delaware. Though the program was called applied math, he was technically studying pure math until, as he explains with a laugh, he discovered that he was, in fact, interested in applied math, specifically in its applications in biology.

Like his discovery of math as an undergraduate, Udeigwe’s discovery of mathematical biology pushed him to shift gears. He moved back to Pennsylvania to the University of Pittsburgh to continue his PhD where he got his first taste of mathematical neuroscience. From there, he became a professor at Manhattan College, a liberal arts college in the Bronx. He says that it’s been a wonderful position for improving his teaching skills and getting to work closely with students, but he’s often had to put his research on the back burner.

Despite the heavy course load, though, he’s remained intellectually engaged with the neuroscience community, attending conferences and watching lectures online. One such presentation, from MIT’s Center for Brain, Mind, and Machines, was by MIT’s James DiCarlo, the Peter de Florez Professor of Neuroscience and, at the time, head of the Department of Brain and Cognitive Sciences.

Udeigwe was immediately drawn to DiCarlo’s research using advanced computer models to understand the complex brain systems that underlie vision. A cold email and several meetings later, DiCarlo and Udeigwe had applied for the MLK Scholars Program to get Udeigwe to MIT.

“I love Jim’s lab, the collegial nature of it,” Udeigwe says. “We’re all colleagues, trying to build something, trying to push forward our little part of the enterprise of science.”

One of the core aspects of that enterprise for Udeigwe has been to bridge what DiCarlo describes as a tension in neuroscience. On the one side are those classically trained in math and physics who want to create models to describe neural activity using elegant equations that are easy to understand (at least for anyone who thinks in terms of “simple” differential equations). On the other side are those like DiCarlo, who rely on simulation and brute computational force to create models that can scale up to describe the entire complex system of vision but are, as DiCarlo describes them, “opaque to humans.”

Both Udeigwe and DiCarlo hope that by working together they can find something in between.

“He’s a mathematician. I’m more of an engineer and experimentalist,” says DiCarlo. Both, he explains, have a lot to learn from each other as to how the other side approaches fundamental questions in neuroscience. They’re also the perfect combination to jointly teach students to better understand the advantages — and potential shortfalls — of applying mathematical theories to complex systems like the brain.

The class they’ve designed, a seminar for graduate students and advanced undergraduates, starts with a basic discussion establishing definitions and clarifying differences between theories, models, hypotheses, and frameworks. From there, they plan to look at “theories that have worked,” as Udeigwe describes it, figuring out where those theories came from, what they can accomplish, and where they’ve fallen short.

To that end, Udeigwe has been working with Tiago Marques, a postdoc in the lab, on a project to improve models of what’s called the ventral stream. The ventral stream is the series of brain processing steps that translates images into patterns of increasingly complex neural activity so that the image striking the eye becomes an object recognized by the brain. The first processing step, called the V1, is the part of the path that’s best understood. Of particular interest is a property of the V1 area called “surround suppression.”

Scientists understand that each neuron in the V1 is activated in response to one small region of an image. Standard computer models of visual processing are designed to capture that fact. Surround suppression, though, means that the strength of each neuron is modified (usually suppressed, as the name suggests) by the addition of features in the image outside of that neuron’s primary region — features that stimulate neighboring neurons. While such “surround” phenomena are empirically well understood, they’re not explicitly incorporated into existing models of the ventral stream.

Udeigwe’s goal is to change that by incorporating surround suppression into contemporary models derived from machine learning, with the hope that that will improve object recognition to be more human-like. In turn, those computer models — grounded in elegant mathematics — can be used to better understand object recognition in people.

DiCarlo says that Udeigwe’s work is an ambitious step in trying to link mathematical models at the single-neuron scale to the workings of the entire ventral processing stream. For Udeigwe, it’s an also opportunity to bring together MIT and Manhattan College. Two of his students, Andrew Cirincione and Artiom Bic, are working on the research with Udeigwe and Marques and have visited MIT several times.

Udeigwe is already strategizing ways to foster his relationship with MIT beyond the period of the fellowship. He hopes to continue teaching the course developed with DiCarlo, extending it around theory in science broadly, and to leverage the relationships he’s building this year for future collaborations. He also wants to further his research around the intersections of math and vision with bite-sized projects that his Manhattan College students can undertake.

As to whether his time at MIT has converted him to DiCarlo’s more simulation-based approach to neuroscience, Udeigwe laughs that he remains “agnostic.”

“I’m a mathematician. I like the pithiness of math equations. It’s elegant, it’s portable to other fields. It’s easy to convey to students,” he explains. “But, at the same time, not all nice equations lead to things we can build … so I have to be open to different methodologies.”