David Pritchard talks about the trajectory of atom interferometry 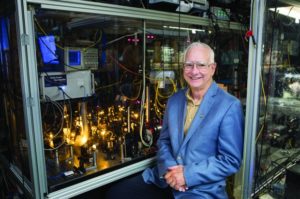 Pritchard, the Cecil and Ida Green Professor of Physics, is perhaps best known for developing techniques to cool and trap atoms to nano-kelvin temperatures. His motivations for developing a series of inventions and techniques were, in part, spurred on by the possibility of making a Bose-Einstein condensate — a form of matter in which gas atoms, at temperatures a million times colder than interstellar space, condense into a single low-energy state and behave like a giant quantum wave of matter. The creation of BECs, using the apparatus developed with Pritchard, resulted in the 2001 Nobel Prize in Physics, awarded to Pritchard’s former postdoctoral student Wolfgang Ketterle, the John D. MacArthur Professor of Physics, his former graduate student Eric Cornell PhD ’90, and Carl E. Wieman ’73, who was Pritchard’s former racing sailboat crew member.

These early fundamental studies of atom cooling and Bose-Einstein condensates have led to new discoveries and applications in quantum nanomaterials, solid-state physics, and quantum computing — with much of that research happening at the MIT-Harvard Center for Ultracold Atoms directed by Ketterle.

“Sometimes, you know if you can do this research, it’s going to be important. You know before you make a Bose-Einstein condensate of atoms that it could lead to a Nobel Prize or an entire research center like the Center for Ultracold Atoms, for instance,” said Pritchard. “But sometimes you don’t really know where these things are going to go.”

I hope that someday people will say ‘Basic research is too valuable a human enterprise for its support to be left solely in the hands of the government.’

When he first began to consider manipulating atoms by using the quantum wave nature of their propagation, he said he couldn’t have predicted the outcomes that later emerged. “But you get hooked on the idea, you conceive ways of how you might pursue this thing, and how you could exploit this untapped aspect of nature, and at some point it becomes a project so sweet, you have to do it,” he said. “It’s just this possibility that science seems to allow, and then there’s the urge to do it.”

Years ago, Pritchard and his team had begun working to understand how atoms interact with light beams. This opened up a new field of inquiry later coined “atom optics.” During this course of research, Pritchard and his team attempted to demonstrate the diffraction of atom waves from the periodic interaction potential of a standing light wave. The scientific community was already familiar with the phenomenon of diffraction in waves of light, which can be demonstrated by the familiar rainbow effect reflecting off of the business side of a compact disc. When a light beam hits the grooves of a CD’s surface, it will diffract off at specific angles depending on the spacing of the grooves and the wavelength of the light.

Pritchard’s inspiration for atomic diffraction and later, interferometry, from material objects rather than light came initially from a presentation made by Henry (Hank) Smith, Professor Emeritus of Electrical Engineering and Computer Science, who, like Pritchard, also worked in the Research Laboratory of Electronics. Smith was researching the creation of submicron structures called “gratings” made on silicone surfaces to analyze UV light.

While listening to that presentation, Pritchard said, “We started thinking about the possibility of bouncing atoms off [these] surfaces.” After having a post-presentation lunch with Mark Schattenburg, then a postdoctoral student working with Claude Canizares, the Bruno Rossi Professor of Physics, Pritchard said, “We realized it would be much easier to demonstrate atom diffraction from a fabricated transmission grating.” Smith teamed with Canizares and Schattenburg who were developing new transmission grating technology for the Einstein Observatory X-ray telescope.

If they constructed an apparatus using these gratings, the team could send atom waves through them and the waves would emerge only where the slits were, similarly to how light waves bounce off of the various grooves of a CD. Using this method, they could demonstrate atom diffraction and measure how an atom wave propagates. Pritchard borrowed a grating from the Smith team and devised an experiment with then graduate student David Keith, now a professor at Harvard University. The weekend after they obtained the grating, Pritchard said he was able to demonstrate atom diffraction.

By using three such gratings, Pritchard said he realized they could fashion an interferometer for atom waves, using a standard interferometer made for X-rays. The first grating would split an atomic beam in two, and the beams would be diffracted back together by a second grating, where they would produce a “grating” of atoms in space that could be detected by moving a third grating to either transmit or block these atoms from a detector.

An interferometer would open up a whole host of possibilities for manipulating atom waves, and offer more accurate measurements of the intrinsic properties of atoms and molecules. For instance, by inserting a piece of metal between the two atom beams to allow the application of a different magnetic field, electric current, or gas to one atom wave and not the other, Pritchard’s group measured a number of atomic and molecular properties either for the first time or with improved accuracy.

In the 1970s when laser gyroscopes were being developed to measure rotation in inertial space, atomic interferometers were proposed to improve the sensitivity of these devices. Pritchard’s group was the first to demonstrate and patent the billion-fold improvement of the inherent sensitivity of an atom interferometer relative to a light interferometer. They hung their apparatus from the ceiling with a wire and showed the device could detect the Earth’s rotation with an accuracy of 4 percent in just 1 second of measurement. At Stanford University, Professors Mark Kasevich and Steven Chu demonstrated the tremendous accuracy of atom interferometers by measuring the position of atoms as they moved through trajectories determined by gravity. Together, these efforts demonstrated atom interferometric detection of motion, moving the science “to the point where it becomes engineering — that is where we understand the fundamental science and the new technology well enough to be able to design something and predict how it will work before we build it,” Pritchard said.

The capabilities of atom interferometric inertial sensing suggest that an inertial navigation system could be designed in a space as small as a suitcase that could track the movement of a vehicle for an hour with a target accuracy of 10 meters, without preexisting knowledge of the terrain and without a GPS signal, said Pritchard. In another example, pairs of coupled atom interferometeric gravimeters can be lowered down bore holes to detect the gravitational effects of oil-saturated layers of sand and rock. “These applications show that one can’t predict where basic research will go, or how quickly, and it can make a striking impact far from the original area of basic research,” said Pritchard.

Curiosity-based research is the hallmark of MIT scientists: “People who don’t regard 10 pm as ‘time to go home’ if the apparatus is working,” said Pritchard. They are hard-working researchers driven by a passion and curiosity for answering the scientific questions that begin with What if? The answers to these open-ended questions require rigorous study and can lead to unintended, valuable, and far-reaching consequences.