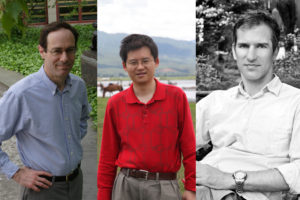 Three MIT faculty members are among 168 people out of 3,000 applicants granted a fellowship by the John Simon Guggenheim Memorial Foundation. The foundation’s announcement notes that the awardees were chosen based on their prior accomplishments and strong future potential. The MIT recipients are David Jerison and Hong Liu in the School of Science, and Seth Mnookin in the School of Humanities, Arts, and Social Sciences.

“It’s exceptionally satisfying to name 168 new Guggenheim Fellows,” says Edward Hirsch, president of the Guggenheim Foundation. “These artists and writers, scholars and scientists, represent the best of the best.” This year’s recipients join more than 18,000 extraordinary individuals who previously received this honor.

David Jerison, a professor in the Department of Mathematics, has received a Guggenheim fellowship to study interfaces that divide regions in optimal ways; these can be applied to situations where minimized energy or cost is important. Previously, he was one of 10 principal investigators awarded a 2018 Simons Foundation Collaboration Grant. He is also a recipient of a Sloan Foundation Research Fellowship, the Bergman Prize, and a National Science Foundation Presidential Young Investigator Award. He is also currently a fellow of the American Academy of Arts and Sciences and the American Mathematical Society, and vice president of the American Mathematical Society. A dedicated teacher, Jerison became an MIT MacVicar Faculty Fellow in 2004 and has designed many popular courses for MIT’s Open Courseware, MITx and edX.

Hong Liu will be applying his fellowship to his interdisciplinary research on black holes, turbulence, and quantum many-body systems. A professor in the Department of Physics, Liu has helped found interconnections between gravitational, nuclear and condensed matter physics, one of the first to use string theory to study quark-gluon plasma and identify similarities between black holes and superconductors. Prior to this fellowship, he was elected an Alfred Sloan Fellow, an Outstanding Junior Investigator by the Department of Energy, and a Simons Fellow.

Seth Mnookin is the director of the Graduate Program in Science Writing and a professor in the Comparative Media Studies/Writing program. He has authored three books to date: his first was recognized as Best Book of the Year by The Washington Post, his second reached The New York Times‘ bestseller list, and the most recent won the “Science in Society Award” from the National Association of Science Writers. The Guggenheim Fellowship is the most recent award for Mnookin, whose other accolades include the American Medical Writers Association prize for best story of 2014 and his election to the board of the National Association of Science Writers.