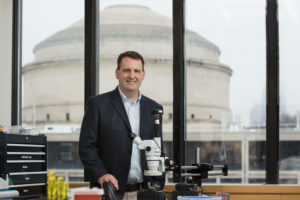 The School of Science has announced that Robert Simcoe, the Francis L. Friedman Professor of Physics, will be named the new director of MIT’s Kavli Institute for Astrophysics and Space Research. Simcoe takes over from Professor Jacqueline Hewitt who held the post for more than 15 years.

“Rob’s passion for studying the universe combined with his hands-on knowledge of instrumentation development will serve him well as he seeks to support MKI’s research programs across many areas,” says Michael Sipser, dean of the MIT School of Science. “I look forward to working with him to keep the MIT Kavli Institute on its upward trajectory.”

Simcoe currently serves on the MKI steering committee and is the faculty lead for MKI’s astronomical instrumentation group.

An amateur astronomer and telescope maker from his youth, Simcoe says he is thrilled to be leading the institute that inspires so many young scientists and researchers.

“I have enjoyed astronomy since as far back as I can remember, and picked up telescope making as a hobby around the sixth grade,” says Simcoe. “Likewise, MKI’s mission seamlessly weaves world-class technology and instrument development with fundamental scientific research on the inner workings of the universe, two of my abiding pursuits that also mirror MIT’s mind and hand ethos.”

Simcoe builds new observational tools, specifically using optical–infrared instrumentation to investigate galaxies and intergalactic matter at the epoch when the universe was in its infancy nearly 14 billion years ago.

Infrared astronomical spectroscopy is an essential tool for studying these earliest epochs. In 2010, he served as principal investigator and project scientist for the FIRE infrared spectrometer, which operates at the 6.5-meter-diameter Magellan telescopes at Las Campanas Observatory in Chile. Recently, the team used FIRE to identify the most distant known quasar, whose light was emitted when the universe was just 5 percent of its present age.

“Rob is a natural choice to succeed Jackie and to provide continued leadership for the astrophysics community,” says Claude Canizares, the Bruno Rossi Professor of Physics, former director of the Center for Space Research, and head of the MKI director search committee.

Simcoe came to MIT in 2003 as a Pappalardo Postdoctoral Fellow in the Department of Physics following the completion of his doctoral work in astronomy from Caltech. At MIT, he worked with Paul Schechter, the William A. M. Burden Professor of Astrophysics, before joining the MIT faculty in 2006 as an assistant professor of physics. Simcoe has received many awards for research, including an Alfred P. Sloan Foundation research fellowship in 2009 and Radcliffe Institute Fellowship in 2016.