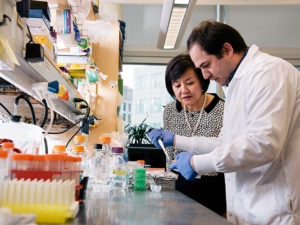 Today, an estimated 46 million people worldwide suffer from Alzheimer’s disease or some other form of dementia. That number is expected to double every 20 years as life expectancy rises and populations age. Currently, there are no effective therapies and the economic burden of Alzheimer’s disease is unsustainable; in the United States alone, care for Alzheimer’s patients is estimated to total $1.1 trillion by 2050. Meanwhile, there is limited federal support for Alzheimer’s disease funding. In the current National Institutes of Health budget, $5 billion is spent for cancer research annually compared to less than $1 billion for Alzheimer’s.

“Our MIT scientists are opening the doors to an entirely new direction of brain research. It is a priority to me to support their efforts,” said Michael Sipser, MIT’s Dean of Science. The tremendous need to address the burdens of the aging brain—memory loss, cognitive decline, and dementia—is what gave rise to an Institute-wide call to action at MIT, the Aging Brain Initiative.

Dementia is not a normal process of aging. The Aging Brain Initiative at MIT was created to develop a better way to explore Alzheimer’s disease and other dementias with the mission to stop this scourge for good.

“How dementia begins and progresses is still a mystery,” said Picower Professor Li-Huei Tsai, who heads MIT’s Picower Institute for Learning and Memory, and the Aging Brain Initiative. “And to solve that mystery requires a completely different approach.”

What distinguishes the Aging Brain Initiative is its focus on Alzheimer’s disease as a whole-systems failure and not the result of a single flawed component. Pharmaceutical approaches—all of which have failed—are only going after individual components, such as a gene mutation or amyloid plaque, one at a time. The Aging Brain Initiative is looking at the entire system.

The initiative is looking at the interactions of brain circuits throughout the brain. The brain’s uniqueness, after all, is in the billions of neurons and the trillions of connections—synapses—that form its intricate, computer-like circuits. This systems approach will also identify biomarkers for aging, explore personalized therapies, and find ways to enhance healthy brain aging. It has already yielded remarkable new insights and is now poised to accelerate.

Where better to explore such things than at MIT, with its strength in computer science and engineering as well as cutting-edge bioscience? This powerful collaborative effort draws expertise from across MIT—neuroscientists, biologists, computer scientists, economists, and engineers—all working together to bring their insights into this approach to exploring the breakdown in the brain as it ages.

“We believe that we can solve the mystery of the aging brain, and bring new therapies to the clinic that can spare families the tragedy of a loved one with dementia,” said Tsai. “But in order to do so, we need to understand degenerative processes—as well as the factors that lead to healthy aging—much more thoroughly. We have to look at the brain as a complete and unique system.”

With 40-hertz light therapy, Alzheimer’s patients may one day be able to treat themselves–perhaps wearing a special headset that emits flickering light.

In the brain, large groups of interconnected neurons can fire together in a regular, synchronized manner to produce long-range oscillations, or brain waves. One particular set of these rhythmic patterns, called gamma waves, is known to be involved in higher-order brain functions such as attention, sensory perception, and memory—the same cognitive functions affected by aging. In Alzheimer’s disease, the brain no longer produces gamma wave oscillations, even before cognitive symptoms can be detected. Tsai wondered if this brain circuit failure could be causing the disease progression and if functionality could be restored. She discovered that indeed, it may be.

In collaboration with MIT Professors Edward Boyden ’99, MNG ’99 and Emery Brown, Tsai found that they could stimulate gamma waves in the brains of mice with Alzheimer’s disease by exposing them to lights flashed on and off at a particular frequency, about 40 cycles per second. In effect, the light signals activated the brain and trained neurons to fire at gamma frequencies.

Other results produced by this light therapy were just as stunning. First, brain levels of beta amyloid, the main component of the sticky plaques built up in the brains of Alzheimer’s patients, were almost cut in half with an hour of exposure to the light. Repeated exposures—an hour a day for a week—produced reductions in amyloid levels and in the sticky amyloid plaques. In addition, the flickering lights and the resultant gamma waves reactivated sluggish microglia, the brain’s immune cells. The microglia became larger and started scavenging amyloid peptides.

Restoring gamma waves also appeared to help keep brain cells from dying—preventing brain shrinkage. Moreover, the brain’s vasculature started to expand, which in addition to reducing amyloid production may help to clear amyloid from the brain.

Most importantly, however, the mice treated with the flickering lights could learn again, and cognitive tests showed that their memory improved. In mice it seems this therapy makes the brain healthier and able to work towards treating its own Alzheimer’s disease.

The question now is: can this therapy have the same results in humans suffering from Alzheimer’s? If it can, this would be the first noninvasive and effective treatment available.

Patients would be able to administer it themselves—perhaps by wearing a special type of headset that emits the light or sitting in a room with a device that flashes at 40 hertz for a period every day. The MIT team is already preparing human studies to test such devices. They are also looking at whether other sensory modalities, such as sound or smell, can produce the same effects.

“It’s possible that gamma wave therapy could benefit other diseases besides Alzheimer’s or even enhance normal memory,” said Boyden. “Perhaps gamma stimulation could be embedded in our music, our TV shows. The possibilities are amazing.”