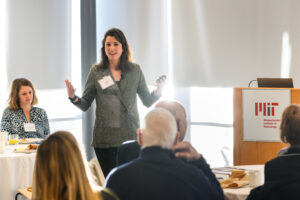 The role black holes play in the evolution of our universe is a large topic to ponder all before 9 a.m. But it’s also an exciting one, especially for those who attended an early morning research talk given by Assistant Professor Erin Kara, Class of 1958 Career Development Assistant Professor of Physics and an astrophysics researcher in the MIT Kavli Institute for Astrophysics and Space Research.

Before the pandemic, the MIT School of Science breakfast talks were a regular series in which guests enjoyed breakfast and speaker presentations. The breakfast talk at the Samberg Conference Center on the bright, chilly morning of Oct. 20, 2022 was the first held in more than two years. Nergis Mavalvala, the Curtis (1963) and Kathleen Marble Professor of Astrophysics and dean of the School of Science welcomed guests back to campus and introduced Kara.

“I don’t know of anyone of any age who isn’t interested in black holes,” Mavalvala said. Alumni, faculty, staff, and black hole fanatics of different ages packed the room, hooked on Kara’s every word.

Kara began by expressing how working with her students and research group has been one of the greatest joys of her career at MIT. She then transitioned to her favorite astronomical image, an early Hubble deep field, depicting twinkling galaxies. In the middle of each galaxy lies a supermassive black hole a million to a billion times the mass of the sun.

Supermassive black holes are thought to be the only force that can unleash energy powerful enough to shape a highmass galaxy. When materials are dumped into a black hole, the gravitational potential energy of the material is released, producing blazing radiation and relativistic jets punching from the black hole’s center. A key component of Kara’s research — as well as modern astrophysics — is to understand how the energy feedback process works in detail. Because the exchange takes place on such a small scale near the black hole’s event horizon, Kara stated she needs to “zoom in to the innermost regions of black holes,” — her main research interest.

Kara explained how reverberation mapping, a new technique to measure the inner workings of black holes, uses echoes of light bouncing off inflowing gas near the black hole to recreate what it looks like around the black hole. The process is akin to how bats echolocate in a dark cave: they internally measure the time delay of the sound reflecting off the wall and utilize it to establish the cave’s space.

But mapping the data of an active black hole, the kind that determines how galaxies develop, is difficult. They appear as points of light on any data. Kara’s goal is to reconstruct what she and her team believe it must look like on event horizon scales close to the black hole — and all they have to go off of are the photons’ energy and when the photons hit the team’s detector.

Furthermore, Kara’s team built the detectors on NASA’s Neutron star Interior Composition Explorer (NICER), a tool on the International Space Station (ISS) about the size of a washing machine. After communicating with the Monitor of All-sky X-ray Image, an instrument in the Japanese Experiment Module on the ISS, in 2018 NICER turned to face a stellar black hole in outburst every day for around a year.

And the particular outburst NICER focused on was the brightest they had ever seen. Not only did it produce valuable data and an image displayed on the cover of Nature, but Kara’s team measured the shortest reverberation light echoes recorded so far.

Music is also one of Kara’s great passions. Her recent side project satisfies that curiosity of what it would be like to turn a black hole’s light echoes into sound echoes — what it would sound like around a black hole. In partnership with Kyle Keane in the Department of Materials Science and Engineering, Ian Condry in the Department of Comparative Media Studies/Writing, and her collaborator Michal Dovciak at the Czeck Academy of Sciences, they converted these light echoes into sounds, which Kara played during her talk.

Everyone in the room froze, startled with delight, as a black hole visual simulation manifested onscreen and the shifting pitch of light echoes, the music of the cosmos, filled the room.

“I think it’s amazing we can peer as far into such enigmatic objects,” said Ila Fiete, a professor in the Department of Brain and Cognitive Science and an associate investigator at the McGovern Institute for Brain Research who attended the event. “A combination of physics and mathematics together with such amazing ingenuity and telescopes and infrastructure. I think it was beautiful. It was amazing.”

Guests were eager to ask questions, such as how other frequencies affected the process of transfiguring light echoes into sound.

“It’s like a rainbow of light, right?” Kara responded. “Light over all frequencies. If you were to play that, it would sound horrible. We wouldn’t be able to pick out anything.”

She described how her team addressed these challenges: While everything was based off real general and special relativity, they had to pick certain frequencies and increase the sound to create something they could hear.

Kara ended the talk with questions of her own: “How did the first supermassive black holes grow? We see these 10 billion solar mass black holes when the universe was less than a billion years old. How did they get so big so fast? Looking at those furthest black holes in X-rays is on the next frontier, and that’s why we’re hoping to launch this mission called AXIS.”

AXIS (Advanced X-ray Imaging Satellite), a NASA Probe Mission Concept, was originally developed to serve as the lead high angular resolution X-ray mission of the 2020s, enhancing the X-ray resolution and spectroscopy work of the respected Chandra X-ray Observatory. AXIS was submitted to the Astro2020 Decadal Survey, and NASA intends to send it as a mission proposal in early 2023.

Kara notes that a project of this magnitude would require constructing large telescopes and international effort. “To probe the first black holes is really exciting stuff,” Kara concluded.