More than 100 high school students compete at the inaugural MIT Science Bowl Invitational, hosted by students and sponsored by the School of Science. 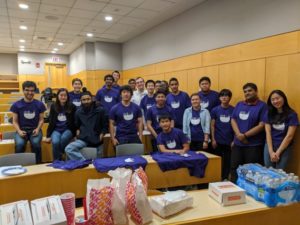 Teams from 23 schools gathered at MIT on Nov. 16 to compete in the first-ever MIT Science Bowl Invitational — an informal, fast-paced quiz-style event for high school students. Six weeks earlier, the event was just an inkling in the minds of the MIT students who organized the event.

“Normally, what we run is an official regional competition for middle schoolers that usually happens in the spring,” explains Paolo Adajar, a junior in mathematical economics at MIT who participated in Science Bowl competitions during both middle school and high school. At the regional event, founded by MIT alumna Kathleen Schwind SM ’19, schools in the northeast come to MIT to compete and win a coveted spot at the annual National Science Bowl competition, hosted by the U.S. Department of Energy. “But what we’re doing this year is running an unofficial invitational during the fall for high school students,” says Adajar, the president of MIT Science Bowl, who spent the day zipping around campus on a scooter to make sure the event was running smoothly.

The invitational was open to all schools in the country, with teams coming from around the northeast and as far away as Georgia. For the students, this was an opportunity to interact with other Science Bowl teams in a more fun, less stressful environment. It also allowed teams, many of which are full of first-years and sophomores, a chance to get their feet wet and to figure out their strategies for answering questions at the regional events.

“I noticed that our kids are more cautious, they want to hear the whole question,” says David Reeder, a physics, geology, and chemistry teacher at Northfield Mount Hermon in northwest Massachusetts. Other teams had a different approach when it came to buzzing in. “It’s a very young team, and maybe a little too aggressive with the buzzer,” says Nick Van Dusen, a parent accompanying the team from West Windsor-Plainsboro, New Jersey.

The morning rounds were round-robin style, with the 23 teams divided into five groups and competing against each other in 16-minute sessions. Each round consisted of a series of questions about biology, chemistry, physics, math, energy, and Earth sciences. Correctly answered questions gave the team four points and the chance to answer a more complicated bonus question. Rooms were filled with the sound of buzzers and rapidly rising scores. After a lunch of pizza and donuts in the Memorial Lobby of Building 10, the top two teams from each group proceeded to the double elimination rounds in the afternoon.

Science Bowl questions are created by the U.S. Department of Energy and carefully guarded; for weeks after receiving them, Adajar kept them in a bright orange suitcase that he jokingly referred to as the nuclear football.

The invitational was also a practice run for the current crew of MIT students who oversee the annual middle-school Science Bowl at MIT, which is sponsored by the School of Science. Adajar hopes that, in the process of running the invitational, they’ll become more prepared for the regional event scheduled for spring 2020. Many of the club’s members graduated last year, and earlier this year the current members brainstormed how they wanted to run Science Bowl moving forward. The potential for an MIT Science Bowl Invitational came up, although the timeline of six weeks seemed tight. “It was a lot of frantic phone calls to see if we could get buzzers, get rooms, get approvals,” remembers Adajar. “Once we realized we could make it work, we said, why not?”

This article was also posted to MIT News.