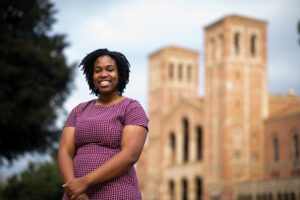 In her third year of medical school at the University of California, Los Angeles, Chinonyelum (‘Nonye’) Ikeanyi ’19 spends her days in the hospital. After years of studying, Ikeanyi finds that this hands-on work — completing clinical rotations in internal medicine, OBGYN, pediatrics, and more — makes her feel like she is finally doing what she set out to do.

Ikeanyi recalls advice from her mom: “The things that are meant for you will happen, as long as you try your best.”

Born and raised near the beach in California, Ikeanyi moved from the west coast to attend MIT; although, there was an element of chance in that cross-country journey. MIT caught her eye as a QuestBridge Scholar in high school because it was a non-binding option, and when she visited campus for the first time, she was “pleasantly surprised by how many people were super down-to-earth, super cool, and very interested in so much more than just tech.”

At MIT, Ikeanyi certainly threw herself into more than just technology. “It’s totally okay to not know what you want to do at all … explore all the things that you’re interested in,” she advises. “There’s so many times at MIT where maybe I chose to have fun instead of get work done per se, and I don’t regret those times.”

At the end of days full of classes for her biology and mechanical engineering majors, Ikeanyi recalls evenings packed with meetings for various student organizations. She was deeply involved in the African Student Association, served as president of the Dormitory Council, and helped to revive the Minority Association of Pre-med Students. As programs chair of the National Society of Black Engineers, she led science activities every month for high schoolers, from extracting DNA from strawberries to building game controllers for Temple Run.

After participating in the Interphase EDGE summer program in 2015, which she describes as a “hugely impactful” experience, Ikeanyi returned as a residential facilitator over the next few summers. She enjoyed helping students adjust to being at MIT and acting as a teacher’s assistant for calculus and chemistry classes.

According to Somiya Kalloo, Assistant Dean in MIT’s Office of Minority Education (OME), Ikeanyi was “passionate about mentoring and supporting her peers, especially those who came after her”—much like the women she admires.

Ikeanyi lists women who inspire her: her mom, who emigrated from Nigeria to give Ikeanyi and her younger brothers a better life; Letitia Bradford, the first Black woman to graduate from UC San Francisco’s orthopedic residency and current Executive Director of Nth Dimensions; Nadine Burke-Harris, a Black pediatrician and California’s first Surgeon General; and DiOnetta Crayton, associate dean for the Office of the Vice Chancellor and OME director, who, Ikeanyi remembers, “made mountains move for us.”

When she graduated in 2019, Ikeanyi’s extraordinary contributions to MIT were honored with a Ronald E. McNair Scholarship. McNair earned his PhD in physics from MIT in 1976 and went on to become a NASA astronaut and astrophysicist before tragically dying in the Challenger disaster in 1986. Established in his memory by the Black Alumni/ae of MIT, the award recognizes Black undergraduates who have demonstrated strong academic performance and who have made a considerable contribution to MIT’s minority community.

“Knowing how they chose McNair scholarships, and how it was really about people who had been pursuing leadership and trying to really advance the Black community at MIT, it felt really special,” Ikeanyi reflects. “You don’t do these kinds of things for the recognition. So many people don’t get the opportunity to go to MIT … so I think that’s truly, truly wonderful.”

From MIT to med school

Ikeanyi’ s leadership skills continue to shine in medical school, where she is a member of two cohorts. The first is the Charles R. Drew/UCLA Medical Education Program, which consists of 24 students selected for their academic excellence and commitment to serving underserved communities with compassion. The second is the UC Programs in Medical Education (UC PRIME), a dual degree program that develops physicians as leaders, with PRIME-LA focusing on “the development of leaders in medicine addressing policy, care, and research in healthcare for the underserved.”

An aspiring orthopedic surgeon, Ikeanyi said she was moved by her plastics rotation. She had the opportunity to observe a facial feminization procedure for a transgender patient. “To see what reconstructive surgery can do to someone’s confidence and self-esteem, and to further cement who they want to be,” she says. “It’s amazing.” With her engineering background, she appreciates the technical aspects of orthopedic surgery as well — the joint replacements, the screws, learning how to suture or how to drill. “Even if I’m not good at it, I’ve always been a person who is like, ‘Well, if I’m having fun, I might as well put in the hours.’”

On top of her studies, Ikeanyi has been class president for all three years of medical school, a role which reflects her commitment to advocating for her fellow students. One of the lessons she has learned from holding leadership positions is to observe and listen more. “Very rarely do people actually tell you what they need,” she says. Instead, Ikeanyi believes that it is her job to make inferences, determine motivating factors, and shape her course of action from there. “People trust me to do that, and I think that’s really powerful.”

Now, Ikeanyi is in the process of applying for master’s programs in public policy and public health to complete her dual degree with UC PRIME. She is interested in how healthcare, technology, and policy intersect and influence underserved communities, and she seeks to examine, in particular, who has access to new technologies.

Ikeanyi’s compassion is integral in her approach to both medicine and leadership. “I love talking to people. I love hearing their story, and I feel like that’s one thing in medicine that you get to do sometimes on a level that other people might not be able to.” The patient-doctor relationship requires trust, she explains. “I feel like allowing people that space has always been in my personality.”

No matter what, Ikeanyi adds, “You can’t stop from trying to take care of them in the moment that they’re there with you.”

Ultimately, in addition to working as an orthopedic surgeon, Ikeanyi wants to bring her physician’s expertise to a policy role, perhaps running for an elected government post or working toward a nominated position like the Surgeon General. She also sees herself teaching and leading in a university setting, where she could continue to advocate for students and change the system for the better. Whether in politics or academia, on a small scale or large, she says she plans to make an impact.