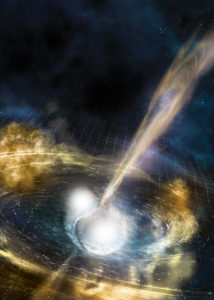 Artist’s illustration of two merging neutron stars. The narrow beams represent the gamma-ray burst while the rippling spacetime grid indicates the isotropic gravitational waves that characterize the merger. Swirling clouds of material ejected from the merging stars are a possible source of the light that was seen at lower energies. Image courtesy National Science Foundation/LIGO/Sonoma State University/A. Simonnet.

Weiss, who came up with the initial design for LIGO some 50 years ago, had been instrumental in shaping and championing the idea as it developed from a desktop prototype to LIGO’s final, observatory-scale form.

In 1967, Weiss, then an assistant professor of physics at MIT, was asked by his department to teach an introductory course in general relativity — a subject he knew little about. A few years earlier, the American physicist Joseph Weber had claimed to have made the first detection of gravitational waves using resonant bars — long, aluminum cylinders that should ring at a certain frequency in response to a gravitational wave. When his students asked him to explain how these Weber bars worked, Weiss found that he couldn’t.

No one in the scientific community had been able to replicate Weber’s results. Weiss had a very different idea for how to do it, and assigned the problem to his students, instructing them to design the simplest experiment they could to detect a gravitational wave. Weiss himself came up with a design: build an L-shaped interferometer and shine a light down the length of each arm, at the end of which hangs a free-floating mirror. The lasers should bounce off the mirrors and head back along each arm, arriving where they started at the exact same time. If a gravitational wave passes through, it should “stretch” or displace the mirrors ever so slightly, and thus change the lasers’
arrival times.

Weiss refined the idea over a summer in MIT’s historic Building 20, a wooden structure built during World War II to develop radar technology. The building, meant to be temporary and known to many as the “Plywood Palace,” lived on to germinate and support innovative, high-risk projects. During that time, Weiss came to the conclusion that his design could indeed detect gravitational waves, if built to large enough dimensions. His design would serve as the essential blueprint for LIGO.

To test his idea, Weiss initially built a 1.5-meter prototype. But to truly detect a gravitational wave, the instrument would have to be several thousand times longer: the longer the interferometer’s arms, the more sensitive its optics are to minute displacements. To realize this design, Weiss teamed up in 1976 with noted physicist Kip Thorne, who, based in part on conversations with Weiss, soon started a gravitational wave experiment group at Caltech. The two formed a collaboration between MIT and Caltech, and in 1979, the late Scottish physicist Ronald Drever, then of Glasgow University, joined the effort at Caltech. The three scientists — who became the co-founders of LIGO — worked to refine the dimensions and scientific requirements for an instrument sensitive enough to detect a gravitational wave.

Barry Barish soon joined the team as first a principal investigator, then director of the project, and was instrumental in securing funding for the audacious project and bringing the detectors to completion.

After years of fits and starts in research and funding, the project finally received significant and enthusiastic backing from the National Science Foundation, and in the mid-1990s, LIGO broke ground, erecting its first interferometer in Hanford, Washington and its second in Livingston, Louisiana.

Listening for a wobble

On September 14, 2015, at approximately 5:51 a.m. EDT, a gravitational wave — a ripple from a distant part of the universe — passed through the Earth, generating an almost imperceptible, fleeting wobble in the world that would have gone completely unnoticed save for these two massive, identical nstruments, designed to listen for such cosmic distortions.

Scientists picked up a very faint wobble in the instruments and soon confirmed that the interferometers had been infinitesimally stretched — by just one ten-thousandth the diameter of a proton — and that this minuscule distortion arose from a passing gravitational wave.

The LIGO Scientific Collaboration, with the Caltech-MIT LIGO Laboratory and more than 1,000 scientists at universities and observatories around the world, confirmed the signal as the first direct detection of a gravitational wave by an instrument on Earth. The scientists further decoded the signal to determine that the gravitational wave was the product of a violent collision between two massive black holes 1.3 billion years ago.

As his wife Rebecca looks on in their home in Newton, Mass., on Oct. 3, 2017, Rai Weiss speaks on the phone with the Nobel Prize ceremony in Stockholm, Sweden, shortly after learning he won the 2017 Nobel Prize in Physics for his Laser Interferometer Gravitational-Wave Observatory (LIGO) work. Credit: M. Scott Brauer.

At the Nobel Prize press conference held at MIT, Weiss credited his hundreds of colleagues who have helped to push forward the search for gravitational waves.

“The discovery has been the work of a large number of people, many of whom played crucial roles,” Weiss said. “I view receiving this [award] as sort of a symbol of the various other people who have worked on this.”

The momentous result confirmed the theory of general relativity proposed by Einstein, who almost exactly 100 years earlier had predicted the existence of gravitational waves but assumed that they would be virtually impossible to detect from Earth. Since that first discovery, LIGO has detected three other gravitational wave signals also generated by pairs of spiraling, colliding black holes.

On October 16, 2017, at a press conference in Washington, D.C., France A. Córdova, director of the National Science Foundation (NSF), which funds LIGO, representatives from the LIGO Scientific Collaboration, and other researchers from ground-based and space-based observatories around the world, announced the detection of GW170817 — gravitational waves resulting from something new — the merger of two neutron stars.

This detection was the first correlation between gravitational waves and electromagnetic signals in the form of gamma ray bursts and X-ray, ultraviolet, optical, infrared, and radio waves.

“I’d always believed that gravitational waves would reveal more of the universe to us — that there would be many more discoveries. But I have to say that I didn’t imagine that it would be quite so soon and certainly not as spectacular,” said Nergis Mavalvala, the Curtis and Kathleen Marble Professor of Astrophysics, who moderated a panel on the discovery following the press conference. “The combination of gravitational waves and electromagnetic observation, the show that we’ve put together of sound and light, has really blown away most of us in the field.”

The inspiraling of the neutron stars produced gravitational waves that were detected for more than a minute with the LIGO detectors; and the additional “messengers” from the event, in the form of visible light and X-ray and radio waves, lasted for days after the cataclysmic event.

We are made of “neutron star stuff”

The astronomical event also confirmed the theory that the collision of these super dense neutron stars produced elements heavier than iron in the periodic table. Anna Frebel, the Silverman (1968) Family Career Development Associate Professor of Physics, described the neutron star collision as the “factories where these heavy elements are produced.”

Frebel began with the famous quote from Carl Sagan: “We are made from star stuff.”

“After today, we know a lot more about what that ‘star stuff’ actually is and how it’s made,” said Frebel, who is not on the LIGO or Virgo teams. “We can confidently add ‘and neutron star stuff’” to the list of what humans are made from, she said.

To create elements heavier than iron, neutrons must bombard something like an iron nucleus that would ultimately decay and form a stable element like silver or gold. “When you have two neutron stars colliding, you have neutrons galore,” said Frebel. “We had an indication before [this event detection] that only neutron star mergers can produce these elements. No other site has enough ‘oomph.’”

The importance of this merger event, said Frebel, is that “we can actually see element formation in action.”

In the decay of these neutron-rich isotopes to stable elements, light is emitted and can be observed with light-collecting telescopes as “a ‘kilonova’, this afterglow of element production,” she said. Though the creation of the isotopes only takes one or two seconds, Frebel said, the decay to stable elements take a of couple weeks to occur. Scientists, therefore, have a long window to be able to make observations of this event.

Swope and Magellan telescope optical and near-infrared images of the first optical counterpart to a gravitational-wave source, SSS17a, in its galaxy, NGC 4993. The left image is from August 17, 2017, 11 hours after the LIGO-Virgo detection of the gravitational-wave source, and contains the first optical photons from the source. The right image is from four days later, when SSS17a—the aftermath of a neutron star merger—faded significantly and its color became much redder. Image courtesy 1M2H/UC Santa Cruz and Carnegie Observatories/Ryan Foley.

In addition to shedding light on the formation of heavy elements and the rate at which scientists predict these types of events might occur, Mavalvala later added that the detection solves a “decades-long mystery” of the origin of short-duration gamma ray bursts. The Fermi Gamma-ray Space telescope recorded a gamma ray burst on August 17, 2017, performing just as intended with bursts that occur more than 200 times a year. The difference was the near-simultaneous gravitational-wave detection from the LIGO-Virgo global network of interferometers that linked the two events.

Erik Katsavounidis, a senior research scientist in MIT’s Kavli Institute for Astrophysics and Space Research, added that the event “is not just a gold mine scientifically, but it’s literally a gold mine that we’ve just discovered.”