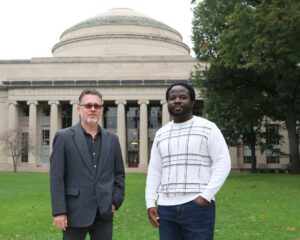 Almost 15 years ago, Robert Gilliard posed for a photo in front of MIT’s Great Dome. At the time, he was an undergraduate at Clemson University visiting MIT with his research advisor, former MIT postdoc and Clemson University professor, Rhett Smith. Just last month, Gilliard arranged a similar photo in front of the dome. This time, though, he was the professor behind the camera, wrangling his own students. And now, Gilliard is back working in experimental chemistry alongside MIT Dreyfus Professor of Chemistry “Kit” Cummins with the 2021–22 cohort of Martin Luther King (MLK) Visiting Professors and Scholars.

As an MLK Scholar at MIT, he’s one of nine professors, in research areas ranging from art to engineering, selected for outstanding contributions in their fields to increase the presence of underrepresented minority scholars at MIT.

In the decade since his first visit to MIT, Gilliard has become one of the brightest young scholars in chemistry. Most recently, he’s won a Packard Fellowship, an Alfred P. Sloan Research Fellowship, a grant from the Beckman Foundation Young Investigator Program, and a National Science Foundation CAREER Award. He was also named to the 2020 class of the Talented Twelve, an elite list of scholars identified by Chemical & Engineering News as rising stars in the world of chemistry.

Currently, Gilliard is an assistant professor of chemistry at the University of Virginia (UVA). He arrived at UVA after completing his PhD at the University of Georgia and a joint postdoc at ETH Zürich in Switzerland and Case Western Reserve University. Even before arriving at UVA, he had built up an impressive résumé, having received postdoctoral fellowships from both the Ford Foundation and the UNCF-Merck Science Initiative dedicated to supporting the training and development of African American biomedical scientists.

Despite his accomplishments, Gilliard humbly describes his professional path as essentially unplanned. He always liked science but admits that he was never “one of those kids with the chemistry set.” In fact, he enrolled at Clemson as pre-med. But it took only one day for him to switch to engineering and only one semester to go from engineering to chemistry. Getting to do research as an undergraduate was the moment that his enjoyment of science became a desire to be a scientist.

Today Gilliard’s lab is pushing the boundaries of synthetic chemistry. He focuses on what are called main-group elements, those elements on the edges of the periodic table like boron and beryllium that have been traditionally understudied by chemists.

“Main-group elements do a lot we didn’t know they could do,” according to Gilliard. “I think we are just now beginning to scratch the surface of what’s possible for these elements.”

Most of his research falls into two buckets. The first is what chemists call small molecule activation, in which they use relatively simple molecules to create new compounds that might be industrially useful. For example, Gilliard’s lab is focused on creating compounds that react with carbon dioxide, which could, in turn, help recycle the potent greenhouse gas from the atmosphere.

The other bucket of research is focused on thermochromic and thermofluorescent compounds, ones that can change color or light up depending on the temperature. Creating molecules that can visibly react to temperature changes provides a way to track ambient conditions without expensive analytical equipment, and, according to Gilliard, the applications for such compounds are endless. For example, soldiers could have uniforms that change color based on terrain they’re in. More immediately, the packaging around COVID vaccines, which need to be stored at a certain temperature, could be developed to change color if it gets too warm and the vaccine is compromised.

Gilliard has no trouble describing potential applications to the compounds his lab is creating, but, for him, applications aren’t the priority. He’s motivated by the fundamental science, by the experimentation, and by the opportunity to create novel molecular structures and bonds that will have applications we can’t possibly predict.

“A lot of times in chemistry, you’re looking for one thing,” he says, “but then you find something that’s way cooler and much more important.”

It’s no surprise, then, that he’s developed a professional relationship with Cummins here at MIT. Like Gilliard, Cummins sees himself as an “exploratory” chemist focused on creating interesting new molecules that have never been written about or that challenge the tenets of theoretical chemistry.

Cummins is Gilliard’s host during his visiting professorship. Cummins was the first seminar speaker Gilliard invited when he started at UVA and the one that introduced Gilliard to the MLK Scholars Program at MIT.

“Kit was just somebody who, throughout my time as a grad student and a postdoc, I just always, and I continue to, hold in such high regard,” says Gilliard. “It’s been a pleasure getting to know him even better since I’ve been here.”

Cummins speaks equally highly of Gilliard and says that he knew the young professor was a great candidate for the MLK Scholars Program as soon as they met. The two attend each other’s lab meetings and have already begun joint research combining the techniques that Cummins’s lab has developed with the novel molecules coming out of Gilliard’s work. Cummins hopes that their collaboration will result in interesting new chemical linkages that can have optical applications and catalyze other kinds of new reactions.

Cummins likens their relationship to a Reese’s Peanut Butter Cup: “two things that are great on their own, but they’re even better together.” He’s been thrilled to have Gilliard bring his insight to the lab and help his team brainstorm exciting new ideas and avenues for research.

“Sometimes my approach to science is a bit more analogous to improvisational jazz,” Cummins jokes. “I’ve always been so happy at MIT that there’s space for people like me and Robert who look at science in that way and view it as an outlet for our creative juices.”

Despite his accomplishments, Gilliard is quick to turn the conversation to those around him, like Cummins, who have helped him get to this point in his career. Even before becoming a professor, there was the high school science teacher, Charlotte Godwin, who encouraged him with hands-on experiments and with whom he remains in contact. There was the professor at Clemson, Lourdes Echegoyen, who recommended he should give chemistry a try. And there was his undergraduate research advisor on whom Gilliard has modeled his own mentoring style. He also credits much of his success to the students in his lab, every one of whom he continues to meet with every week.

Unsurprisingly then, Gilliard’s response when asked about his recent litany of accolades was simply, “I’m just happy for the students.”

This article first appeared in MIT News on November 29, 2021.