New faces in the School of Science faculty 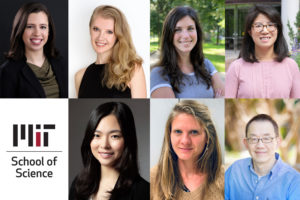 This fall, the School of Science will welcome seven new members joining the faculty in the departments of Biology, Brain and Cognitive Sciences, Chemistry, and Physics.

Netta Engelhardt studies gravitational aspects of quantum gravity with an emphasis on string theory She looks into the thermodynamic behavior of black holes and the idea that singularities are always hidden behind event horizons. Engelhardt joins the Department of Physics as an assistant professor. Engelhardt’s BS is in physics and mathematics from Brandeis University, and she received her PhD in physics from the University of California at Santa Barbara. Previously, she was a member of the Princeton Gravity Initiative at Princeton University. Engelhardt is also affiliated with the MIT Center for Theoretical Physics and the Laboratory for Nuclear Science.

Evelina Fedorenko investigates how our brains process language. She has developed novel analytic approaches for functional magnetic resonance imaging (fMRI) and other brain imaging techniques to help answer the questions of how the language processing network functions and how it relates to other networks in the brain. She works with both neurotypical individuals and individuals with brain disorders. Fedorenko joins the Department of Brain and Cognitive Sciences as an assistant professor. She received her BA from Harvard University in linguistics and psychology and then completed her doctoral studies at MIT in 2007. After graduating from MIT, Fedorenko worked as a postdoc and then as a research scientist at the McGovern Institute for Brain Research. In 2014, she joined the faculty at Massachusetts General Hospital and Harvard Medical School, where she was an associate researcher and an assistant professor, respectively. She is also a member of the McGovern Institute.

Erin Kara researches black holes. She looks into their formation and how they grow and impact the environments around them, particularly with respect to event horizons. To do this, she employs X-ray spectral timing observations. Kara is welcomed by the Department of Physics as an assistant professor. Kara joins MIT from the University of Maryland and the NASA Goddard Space flight Center where she was a Hubble Postdoctoral Fellow and a Joint Space-Science Institute Fellow. She received her undergraduate degree from Barnard College in 2011, and an MPhil in astrophysics and PhD in astronomy from Cambridge University. She is also a member of the MIT Kavli Institute for Astrophysics and Space Research.

Long Ju works on quantum materials. He and his lab investigate how light and matter interact in new materials. By learning about unique electronic and optical properties, they identify specific opportunities to control, design and engineer useful materials and devices at extremely small size and time scales. Ju joins the Department of Physics as an assistant professor. His bachelor’s degree is from Tsinghua University, granted in 2009, after which he finished a PhD in 2015 at the University of California, Berkeley, followed by three years as a Kavli Postdoctoral Fellow at Cornell University.

Pulin Li is a developmental and synthetic biologist. Her work aims to lead to methods that might allow the programming of cells that could produce tissues and cells in regenerative medicine. She and her lab group accomplish this by using bioengineering tools, making quantitative measurements of genetic circuits in natural systems and invoking mathematical modelling. Li is joining the MIT community as an assistant professor in the Department of Biology. Her bachelor’s degree was obtained at Peking University, and she completed a PhD in chemical biology at Harvard University. Prior to her appointment at MIT, she was a postdoc at Caltech. Li is also a member of the Whitehead Institute for Biomedical Research.

Morgan Sheng focuses on the structure, function, and turnover of synapses, the junctions that allow communication between brain cells. His discoveries have improved our understanding of the molecular basis of cognitive function and diseases of the nervous system, such as autism, Alzheimer’s disease, and dementia. Being both a physician and a scientist, he incorporates genetic as well as biological insights to aid the study and treatment of mental illnesses and neurodegenerative diseases. He rejoins the Department of Brain and Cognitive Sciences (BCS), returning as a professor of neuroscience, a position he also held from 2001 to 2008. At that time, he was a member of the Picower Institute for Learning and Memory, a joint appointee in the Department of Biology, and an investigator of the Howard Hughes Medical Institute. Sheng earned his PhD from Harvard University in 1990, completed a postdoc at the University of California at San Francisco in 1994, and finished his medical training with a residency in London in 1986. From 1994 to 2001, he researched molecular and cellular neuroscience at Massachusetts General Hospital and Harvard Medical School. From 2008 to 2019 he was vice president of neuroscience at Genentech, a leading biotech company. In addition to his faculty appointment in BCS, Sheng is core institute member and co-director of the Stanley Center for Psychiatric Research at the Broad Institute of MIT and Harvard, as well as an affiliate member of the McGovern Institute and the Picower Institute.

Seychelle Vos studies genome organization and its effect on gene expression at the intersection of biochemistry and genetics. Vos uses X-ray crystallography, cryo-electron microscopy, and biophysical approaches to understand how transcription is physically coupled to the genome’s organization and structure. She joins the Department of Biology as an assistant professor after completing a postdoc at the Max Plank Institute for Biophysical Chemistry. Vos received her BS in genetics in 2008 from the University of Georgia and her PhD in molecular and cell biology in 2013 from the University of California at Berkeley.

Xiao Wang is a chemist and molecular engineer working to improve our understanding of biology and human health. She focuses on brain function and dysfunction, producing and applying new chemical, biophysical, and genomic tools at the molecular level. Previously, she focused on RNA modifications and how they impact cellular function. Wang is joining MIT as an assistant professor in the Department of Chemistry. She was previously a postdoc of the Life Science Research Foundation at Stanford University. Wang received her BS in chemistry and molecular engineering from Peking University in 2010 and her PhD in chemistry from the University of Chicago in 2015. She is also a core member of the Broad Institute of MIT and Harvard.