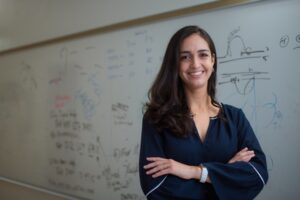 In mid-March, Izabella Pena received a WhatsApp text from a friend in Indianapolis, Indiana. “He said, ‘Oh, I got your audio message from a priest in rural São Paulo,’” remembers Pena, a postdoc in Department of Biology Professor David Sabatini’s lab at the Whitehead Institute for Biomedical Research.

Pena had recorded the five-minute audio message about risk groups and the novel coronavirus SARS-CoV-2 for her family’s text thread after she heard one-too-many comments about how only the elderly caught the more severe forms of Covid-19. She never imagined it would spread like wildfire. “I realized the power of these tools,” says Pena of WhatsApp. “You can really reach people and share your information.”

While Pena’s message was fact-checked and scientifically correct, a lot of the information being shared on these platforms isn’t. In Pena’s native Brazil, the messaging platform WhatsApp has played an outsized role in the spread of fake news concerning SARS-CoV-2. Seeing the onslaught of misinformation, Pena first panicked. Then she fought back, choosing to use the vehicles of fake news to spread facts. “We scientists need to learn how to use WhatsApp, YouTube, and Twitter to communicate,” says Pena. “Because that’s how people are getting their information.”

At first, Pena’s misinformation-busting efforts were focused on friends and family. She recorded short audio messages in Portuguese to answer their questions and try to convince them that Covid-19 isn’t just another cold. The rapid spread of her audio messages, which alerted listeners about the importance of physical isolation and risk groups, sparked an idea: to take her science communication efforts from WhatsApp to YouTube, where she could reach a larger audience. Video also has the benefit of being a visual medium, where there’s a face attached to the information being shared. “I think that if people see you, there’s more reliability,” says Pena.

Pena uploaded her first video in late March, answering questions she had received via WhatsApp about Covid-19. Since then, she’s uploaded another five videos and is aiming to release one a week while the pandemic lasts. Many of these videos are in direct response to the messages she gets from viewers. “For example, everybody is asking when is life going to go back to normal, and I think life is only going to go back to ‘normal’ when there’s a vaccine,” says Pena. On April 10, she uploaded a video focused on vaccines, explaining what exactly a vaccine is and how they are made.

On camera, Pena is warm and inviting, delivering updated information about the coronavirus’s biology and epidemiology without clunky jargon and with an abundance of analogies. In a recent video that delved into the biology of SARS-CoV-2 and the different treatments being explored for the virus, she compared the human protein TMPRSS2, which primes the virus’ spike protein to enable the fusion of the virion to a cell’s membrane, to the scissors you use to open a tough plastic snack bag.

In using analogies, Pena is following the advice of Paulo Freire, a famed Brazilian educator and one of her personal idols. “Freire says that the best way to teach something very complicated to someone is to try to bring that concept close to their lives,” says Pena.

Trying to make complex and novel science digestible requires time. According to Pena, just writing the script and developing the analogies takes a couple of hours. “I collect all the information I need before I write the script,” says Pena, whose videos include a long list of references in the description, an unexpected sight on YouTube. “Then I film and edit the video. It all takes a few hours.”

Pena’s videos are filmed late at night because she continues to perform research during the pandemic, mostly virtually. But, she explains, “I’m part of the essential personnel in my lab.” Pena’s work in the Sabatini Lab focuses on the lysosome, the garbage disposal unit of cells that breaks down old cell parts and waste to recycle nutrients. It’s the perfect organelle for someone who has always enjoyed cell metabolism.

“I’ve always liked how chemicals in the cells are made and broken down,” says Pena. Her PhD research at the University of Campinas in Brazil investigated how metabolic problems in the brain could cause epilepsy. Since joining the Sabatini lab in 2018, Pena studies neurodegenerative disorders, like Parkinson’s and Huntington’s, and what role the lysosome plays in them. “For neurodegenerative diseases, there’s a lot of evidence that there’s lysosome influence,” she says. “There are many lysosome gene mutations associated to these disorders, so it’s a nice target to look at.”

Mostly working from home in Cambridge, Massachusetts, Pena is analyzing data and writing grants and papers, balancing her research with her “after-hours job” as a science communicator. “It’s a lot of commitment and dedication, but I believe this is very important, so I’ll keep doing it,” she says. “We are living a hard time, where science and education are constantly under attack. As scientists, we need to help inform people with accurate and life-saving information”.

Recently, Pena added another job title to her resumé: vice-president of ContraCovid, an initiative to make coronavirus information accessible to Latino and immigrant individuals. “We are sharing information in four languages: English, Portuguese, Spanish, and Haitian Creole, to benefit the community here in the U.S. and abroad,” says Pena. But ContraCovid wants to do more, including creating videos like Pena’s in other languages and recruiting more scientists, so that their materials can reach more and more people.

Accessibility of information is at the front of Pena’s mind when she sits down to make a new video. “If you look at how scientists communicate with each other, it’s a bit intimidating,” says Pena. The jargon and the excess of data make it hard for the general public to locate the main takeaways. Pena focuses on stripping away the excess and delivering the message, such as the importance of flattening the curve, in an easily digestible manner.

When imagining her viewers, Pena thinks of her mother. “My mom is not a scientist, but she’s super into technology like YouTube and WhatsApp,” says Pena, who usually sends her audio clips and videos to her mom first, only uploading them once her mom gives the go-ahead. “My mom helps a lot with sharing the videos because she has lots of followers,” Pena laughs. That’s actually how her involvement in Covid-19 outreach started: with her mom wildly sharing Pena’s audio message about risk groups with her numerous followers.