Michel Goemans named head of the Department of Mathematics 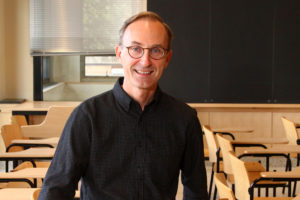 Michel Goemans, professor of mathematics, has been named head of the Department of Mathematics, effective July 1. He has been serving as interim department head for the past year.

“I am delighted that Michel Goemans will lead the mathematics department,” said Michael Sipser, dean of the School of Science. “He has already been doing a superb job as interim department head, and I look forward to continue working with him to maintain and enhance the extraordinary strength of mathematics at MIT.”

Before his appointment as interim department head, he served from 2004 to 2008 as chair of the department’s committee of advisors and subsequently as chair of the applied mathematics committee through 2015. Among other innovations, Goemans created a convenient electronic system for tracking the progress of mathematics majors, and he is now turning his attention to enhancing other departmental processes.

“I am enormously grateful for all the encouragement and support I have received during this year as interim head,” said Goemans. “I look forward to working closely and tirelessly with many members of the mathematics department to support the best environment for mathematics research, education, and outreach.”

Goemans takes over the role from Tomasz S. Mrowka, who has served as department head since 2014.

“I am grateful to Tom for his service to the department, to MIT, and to the field of mathematics,” said Sipser. “During his time as department head, Tom oversaw the return of the department to the recently-renovated Simons building and the recruitment of several outstanding mathematicians to the faculty.”

Goemans earned his BS and MS in applied mathematics from the Catholic University of Louvain, where he also received an honorary doctorate, and completed his PhD in operations research at MIT in 1990. Goemans continued at MIT as an instructor of applied mathematics until 1992 and subsequently joined the MIT faculty, where he is also a member of the Theory of Computation Group at the Computer Science and Artificial Intelligence Laboratory (CSAIL).

Goemans’ research combines optimization, combinatorics, and algorithms. In particular, he has introduced several essential techniques for the design and analysis of approximation algorithms for hard combinatorial optimization problems; these techniques range from semidefinite programming to polyhedral combinatorics. One of his results (jointly with former PhD student David Williamson, now at Cornell University) is an efficient algorithm for partitioning a graph achieving at least 87.86 percent of the number of edges cut in the optimum partition. This textbook result exploits the convexity of positive semidefinite matrices, and has led to a surge of interest and results in the area of semidefinite programming. Surprisingly, a better guarantee for this partitioning problem has been ruled out in the worst-case under some complexity-theoretic assumption by a team of researchers, including his colleague Elchanan Mossel.

Goemans has been honored with several awards, including the Farkas Prize of the INFORMS Optimization Society in 2012, the American Mathematical Society Delbert Ray Fulkerson Prize in 2000, and the Society for Industrial and Applied Mathematics Optimization Prize in 1996 and 1999. He is a fellow of the American Mathematical Society, the Society of Industrial and Applied Mathematics, and the Association for Computing Machinery. He was also named a Guggenheim Fellow by the John Simon Guggenheim Memorial Foundation and is a recipient of a Sloan Research Fellowship from the Alfred P. Sloan Foundation.