Meet the School of Science’s tenured professors for 2018 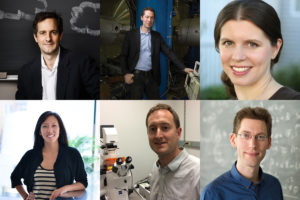 The School of Science has announced that six members of its faculty have been granted tenure by MIT.

Daniel Cziczo studies the interrelationship of atmospheric aerosol particles and cloud formation and its impact on the Earth’s climate system. Airborne particles can impact climate directly by absorbing or scattering solar and terrestrial radiation and indirectly by acting as the seeds on which cloud droplets and ice crystals form. Cziczo’s experiments include using small cloud chambers in the laboratory to mimic atmospheric conditions that lead to cloud formation and observing clouds in situ from remote mountaintop sites or through the use of research aircraft.

Cziczo earned a BS in aerospace engineering from the University of Illinois at Urbana-Champaign in 1992, and afterwards spent two years at the NASA Jet Propulsion Laboratory performing spacecraft navigation. Cziczo earned a PhD in geophysical sciences in 1999 from the University of Chicago under the direction of John Abbatt. Following research appointments at the Swiss Federal Institute of Technology and then the Pacific Northwest National Laboratory, where he directed the Atmospheric Measurement Laboratory, Cziczo joined the MIT faculty in the Department of Earth, Atmospheric and Planetary Sciences in 2011.

Matthew Evans focuses on gravitational wave detector instrument science, aiming to improve the sensitivity of existing detectors and designing future detectors. In addition to his work on the Advanced the Laser Interferometer Gravitational-Wave Observatory (LIGO) detectors, Evans explores the physical processes that set fundamental limits on the sensitivity of future gravitational wave detectors. Of particular interest are the quantum and thermal limitations which have the strongest impact on ground-based detectors like LIGO and also play a role in the related fields of ultra-stable frequency references and macroscopic quantum measurement.

Evans received a BS in physics from Harvey Mudd College in 1996 and a PhD from Caltech in 2002. After postdoctoral work on LIGO at Caltech, Evans moved to the European Gravitational Observatory to work on the Virgo project. In 2007, he took a research scientist position at MIT working on the Advanced LIGO project, where he helped design and build its interferometer. He joined the MIT faculty in the Department of Physics in 2013.

Anna Frebel studies the chemical and physical conditions of the early universe, and how the oldest, still-surviving stars can be used to obtain constraints on the nature of the very first stars and early supernova explosions, and associated stellar element nucleosynthesis. She is best known for her discoveries and subsequent spectroscopic analyses of 13 billion-year-old stars in the Milky Way and ancient faint stars in the least luminous dwarf galaxies, to uncover unique information about the physical and chemical conditions of the early Universe. With this work, she has been able to obtain a more comprehensive view of the formation of our Milky Way Galaxy with its extended stellar halo because the formation history of each galaxy is imprinted in the chemical signatures of its stars. To extract this information, Frebel is also involved in a large supercomputing project that simulates the formation and evolution of large galaxies like the Milky Way.

Aram Harrow works to understand the capabilities of the quantum computers and quantum communication devices and in the process creates connections to other areas of theoretical physics, mathematics, and computer science. As a graduate student, Harrow developed the idea of “coherent classical communication,” which along with his work on the resource inequality method, has greatly simplified the understanding of quantum information theory. Harrow has also produced foundational work on the role of representation theory in quantum algorithms and quantum information theory. In 2008, Harrow, Hassidim, and Lloyd developed a quantum algorithm for solving linear systems of equations that provides a rare example of an exponential quantum speedup for a practical problem. Recently Harrow has been investigating properties of entanglement, such as approximate “superselection” and “monogamy” principles with the goal of better understanding not only entanglement and its uses, but also the related areas of quantum communication, many-body physics, and convex optimization.

Adam Martin studies how cells and tissues change shape during embryonic development, giving rise to organs with distinct shapes and structure. He has developed a system to visualize and quantify the movement of molecules, cells, and tissues during tissue folding in the fruit fly early embryo, where cells and motor proteins within these cells can be readily imaged by confocal microscopy on the time scale of seconds. Tissue folding in the fruit fly involves conserved genes that also function to form the mammalian neural tube, which gives rise to the mammalian brain and spinal cord. Martin combines live imaging with genetic, cell biological, computational, and biophysical approaches to dissect the molecular and cellular mechanisms that sculpt tissues. In addition, the lab examines how tissues grow and are remodeled during development, investigating processes such as cell division and the epithelial-mesenchymal transition.

After Martin received a BS in biology from Cornell University in 2000, he completed his PhD in molecular and cell biology under the direction of David Drubin and Matthew Welch at the University of California at Berkeley in 2006. After a postdoctoral fellowship at Princeton University in the laboratory of Eric Weischaus, Martin joined the MIT faculty in the Department of Biology in 2011.

Kay Tye dissects the synaptic and cellular mechanisms in emotion and reward processing with the goal of understanding how they underpin addiction-related behaviors and frequently co-morbid disease states such as attention-deficit disorder, anxiety, and depression. Using an integrative approach including optogenetics, pharmacology, and both in vivo and ex vivo electrophysiology, she explores such problems as how neural circuits differently encode positive and negative cues from the environment; if and how perturbations in neural circuits mediating reward processing, fear, motivation, memory, and inhibitory control underlie the co-morbidity of substance abuse, attention-deficit disorder, anxiety, and depression; and how emotional states such as increased anxiety might increase the propensity for substance abuse by facilitating long-term changes associated with reward-related learning.

Tye received her BS in brain and cognitive sciences from MIT in 2003 and earned her PhD in 2008 at the University of California at San Francisco under the direction of Patricia Janak. After she completed her postdoctoral training with Karl Deisseroth at Stanford University in 2011, she returned to the MIT Department of Brain and Cognitive Sciences as a faculty member in 2012.