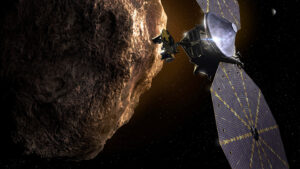 Through imaging and spectral mapping, NASA’s Lucy mission will give scientists the first close-up view of the topography and chemical composition of the Trojan asteroids, which could offer insights into the chemistry of the early solar system. (Image: Courtesy of Southwest Research Institute)

In October, NASA’s Lucy spacecraft launched from Cape Canaveral Air Force Station in Florida, beginning a 12- year, nearly 4-billion-mile mission to explore some of the oldest objects in the solar system. Named after the famous Australopithecus fossil, Lucy, the spacecraft will make two slingshot trips around Earth before heading toward a cluster of asteroids that share Jupiter’s orbit, called the Trojan asteroids. These are believed to be nearly as old as the solar system itself.

Through imaging and spectral mapping, the spacecraft will give scientists the first close-up view of the topography and chemical composition of the Trojan asteroids, which could offer insights into the chemistry of the early solar system, how the planets formed, and the origin of the organic molecules that enable life.

Cathy Olkin ’88, PhD ’96 who received her bachelor’s degree from the Department of Aeronautics and Astronautics (AeroAstro) and her doctorate degree from the Department of Earth, Atmospheric and Planetary Sciences (EAPS), is second-in-command as the deputy principal investigator on the mission. While she was busy preparing the spacecraft for launch, Project Scientist Richard Binzel, professor of planetary sciences in EAPS with a joint appointment in AeroAstro, described the goals of the Lucy mission.

Q: What are the roots of the Lucy mission? And how long has it taken to get to this moment?

A: The Lucy mission itself has been about a 5-year effort to go from the first proposal to the launch pad. But the story goes back many decades, trying to understand these objects out at the distance of Jupiter that we call the Trojan asteroids. They’re asteroids that are stuck in a gravitational tug of war between the sun and Jupiter itself at what we call the Lagrange points, where the gravitational tug of the sun is equal to the gravitational tug of Jupiter. Once something falls into that zone, they’re stable forever. So we think the Trojan asteroids are some of the earliest pieces of the formation of our solar system — we call them fossils of the solar system. And that’s why we named the mission Lucy, after the Australopithecus fossil.

Q: What are some of the outstanding questions that the Lucy mission expects to help answer?

A: We would like to know what the chemistry of the early solar system, particularly the organics, was like. Where did the organics, basically the carbon of life, come from? What was its earliest form? The Trojan asteroids are special because at Jupiter’s distance most of the early chemistry is still literally frozen in time as it would have been at the beginning of our solar system. Their location further from the sun is colder than it is compared to the Earth, so essentially we think we are looking at pieces that have been frozen in time, not only in physical form but also chemically, since the very beginning.

For example, we think the earliest forms of water might be preserved in these objects. Once an object in space comes in close to the sun, about the Earth’s distance, any water present begins to evaporate. But we think the Trojan asteroids have been cold enough that the original water they might contain is still there, frozen, intact, and ready for us to explore and evaluate.

Q: What will the spacecraft’s life look like from launch until it completes its mission?

A: Lucy is on an amazing race track across the solar system to visit the Trojan asteroids.

About a year from now, it will swing by the Earth to pick up a little bit of velocity. And then it does another Earth swingby in late 2024. And that last swingby of the Earth will put it on a path out towards the Trojan asteroids. We have to build up speed and momentum to get that far away, so we use Earth’s gravity to assist.

We will be out in the asteroid belt by 2025. First we will go by a small asteroid named Donald Johanson. Donald Johanson discovered the Lucy Australopithecus fossil, and when an MIT graduate student discovered this unnamed asteroid on our flight path, we were able to get it named after him.

Then, when we pass by Donald Johanson in the main belt, we will finally reach the Trojan asteroid six years from now, in August 2027. We are in one of the clouds of Trojan asteroids. These are in orbit, 60 degrees in front, and 60 degrees in the back of Jupiter. And we’ll be in the leading group of Trojan asteroids, something we call the L4 Lagrange point, in 2027. We have two encounters in 2027, a third encounter in April 2028, and a fourth encounter in November 2028. And then in 2030, we swing back around the Earth, to go to the other side of Jupiter. We get to the cloud on the other side of Jupiter in 2033.

So, if you look at a map of the trajectory of the Lucy spacecraft, it is on a wild and crazy ride to get to both sides of Jupiter over the next 13 years or so.

Each of these objects is like a time capsule. And we’d like to see just how far back each time capsule is pushing our knowledge and understanding of how the Earth and planets came to be.

Q: How do you feel about this launch after so many years of studying the Trojan asteroids and preparing for this mission?

A: I started studying the Trojan asteroids myself back in the 1980s — in fact, the first paper I published on Trojan asteroids was with an Undergraduate Research Opportunity Program (UROP) student. It’s almost surreal to think that we could go from seeing these objects as tiny points of light through a telescope to revealing them as real geological and geophysical worlds. And it takes decades. It takes a whole career to go from telescopic pinpoints to real, tangible objects. So in some ways, it’s surreal. But in most ways, I am simply in awe of what this team has accomplished in a very challenging last few years.

This article first appeared in MIT News on October 18, 2021.