Life away from equilibrium 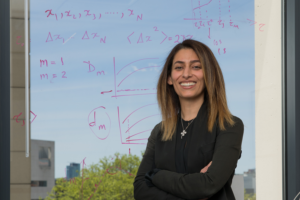 Under a microscope, we can see how single-celled algae use structures called flagella to propel themselves through their environments looking for fuel in the form of light or food. The algae expend energy to create this motion as they seek out other energy sources to move, eat, grow, divide, and reproduce: to live.

What is the characteristic feature of life? Biological systems like algae are far away from equilibrium. Systems in thermodynamic equilibrium are known to satisfy perfectly balanced forward and backward transitions between any two states. By harvesting a fuel in the form of solar energy, a redox potential, or a metabolic sugar, the molecular dynamics in biological systems differ profoundly from those in equilibrium. Some of the fuel’s energy is utilized to perform work or is stored, but the remainder is dissipated into the surrounding environment, often in the form of heat.

We can alternatively understand this energetic loss as an increase in entropy of the environment — a distinct imbalance. However, this dissipation of energy can also jostle surrounding molecules and cellular structures, thermally induced motion that can be hard to distinguish from actively driven movements.

My group develops new ways of probing systems with an apparent steady state to demonstrate how such nonequilibrium dynamics — life — can be identified. Being able to characterize the nature of nonequilibrium steady states is crucial for understanding the nonequilibrium coupling of biological structure with function.

In cellular processes, for example, it is often unclear whether particular stochastic fluctuations of cellular components such as proteins and organelles are driven by thermal or nonthermal processes. This is important because, in contrast to thermal noise, nonthermal noise can generate spontaneous motion even in the absence of an external driving force.

The inherent kinetic energy of water molecules, for example, can move particles and give the illusion of life. Nineteenthcentury botanist Robert Brown observed the apparently random motion of particles from flower pollen immersed in water. Could this movement be life? It would take another 80 years and a new century for Albert Einstein to explain this Brownian motion of pollen particles in terms of water’s atoms and molecules — a steady state system in equilibrium in which no work is done and is therefore inanimate.

Myth of the perpetual motion machine

This possibility of nonthermally induced motion is well illustrated by a thought experiment about perpetual motion proposed by physicists Richard Feynman and Marian Smoluchowski: the eponymous device called the Feynman-Smoluchowski ratchet. The device consists of a ratchet that rotates freely in one direction but is prevented from rotating in the opposite direction by a pawl. The ratchet is connected by an axle to a paddle wheel that is immersed in a fluid of molecules at a fixed temperature. The molecules constitute a heat bath in that they undergo random Brownian motion with a mean kinetic energy that is determined by the temperature. The device is imagined as being small enough that the impulse from a single molecular collision can turn the paddle. When the whole system is kept at a uniform temperature, no net motion is possible: perpetual motion at thermal equilibrium does not exist. As soon as the paddle and the pawl are exposed to different temperatures, the axle can rotate and perform useful work.

Any system in thermodynamic equilibrium is known to satisfy perfectly balanced forward and backward transitions between any two states. It is therefore impossible, for instance, to drive a windmill to do work by using only thermal fluctuations. The new research shows how living systems violate this principle. Thus, even stochastic fluctuations in such living systems could be used to drive such a small-scale paddle wheel.

Until now, there was essentially only one method for determining whether a steady state is at equilibrium or not. This method relies on the conventional fluctuation dissipation theorem (FDT). In the context of Einstein’s paper on the Brownian motion of a small particle in a fluid, the FDT takes the form of a proportionality relation between the diffusion coefficient of the particle at rest and the frictional force needed in order to pull the particle in a particular direction. The proportionality factor provides a measure of the temperature of the system. For a system in
thermodynamic equilibrium, temperature is constant and equal to the sample temperature; any deviation indicates that the system is out of equilibrium. However, measuring FDT violations experimentally is intrinsically invasive, because it relies on the application of controlled external perturbations.

To overcome this challenge, we developed a noninvasive technique based on the knowledge that, at thermal equilibrium, fluxes between any microstates defining a system are balanced. We first defined these microstates at intermediate spatiotemporal scales. The averaged flux between microstates is represented as a vector within a phase space plot. Within this phase space, at equilibrium, there can be neither flux loops nor vortices involving three or more states, what is understood in statistical physics as a “detailed balance.” However, if loops or vortices are observed, then the system is necessarily out of equilibrium, a broken-detailed balance (BDB).

In contrast to FDT, the technique of BDB does not require external perturbations of the system. It relies only on the observation of spontaneous fluctuations of the system using conventional video microscopy. We have successfully demonstrated this technique on different biological systems, such as the beating dynamics of the flagellum of the single-celled algae Chlamydomonas reinhardtii. Using video microscopy, we studied the oscillatory cycle of the algae’s flagellum, breaking the motion down into a series of phase states. In a thermal equilibrium steady state, the
transitions between the phases must be balanced. We observed that these transitions were distinctly imbalanced — in a state of nonequilibrium.

We then applied this statistical physics technique to the stochastic fluctuations of primary cilia, the “hairs” of epithelial cells that line the surfaces of skin, blood vessels and organs. Although the cilium’s motion appears passive, or Brownian, our technique again revealed an imbalance in between these fluctuating states, highlighting an active, living, process.

The video microscopy technique reveals new questions about why cells would expend energy to create this seemingly random motion and how they budget their energy to do so. As physicist Erwin Schrödinger said, “Living matter evades the decay to equilibrium.” Therefore, cells must have a reason to put energy toward these motions to avoid equilibrium — or death.

This new technique has the potential to become a standard tool, not only in biological physics but also more generally in the study of fluctuating systems.

Nikta Fakhri is the Thomas D. and Virginia W. Cabot Career Development Assistant Professor of Physics. She focuses on combining concepts from physics, biology, and engineering to decode nonequilibrium mechanisms in active living matter, to exploit these mechanisms for engineering functional active materials, and to identify universal behavior in this broad class of internally driven systems.