Leaving room for a little improvisation

At the piano and in the lab, double major Tony Zhang is driven by curiosity and creativity. 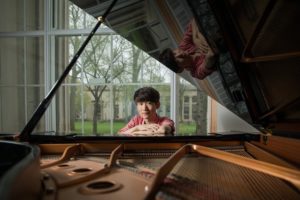 Senior Tony Zhang says his curiosity about physics was piqued by an unlikely source: a rubber band.

“When I was little, I would stretch rubber bands across cabinet and drawer handles,” says Zhang. “A rubber band produces a different pitch when you pluck it, depending on the material and depending on the tension. So I wondered if I could make an entire scale.” When he succeeded, Zhang says he wanted to know how it worked.

Zhang has since pondered the science behind many more observations — and played scales of a more traditional variety. At MIT, he is double-majoring in physics and mathematics with computer science, and minoring in music. Zhang says his double major allowed him to pursue all three of his academic interests, forming what he calls a “math and friends umbrella.”

“What draws me to these academic fields is that I tend to be pretty analytical,” he says. “Computers are cool and math is fun, but I really like this particular way of thinking — being able to understand something from first principles.”

Trying to understand the science underlying an observation is something Zhang thinks about often in everyday life. Once, while playing a board game with some friends on the 30th or so floor of an apartment building, Zhang says the group noticed that the sun seemed to be setting later than would be expected. Someone suggested it was because they were up so high.

“Usually people will think, ‘Maybe that’s it,’ and move on,” says Zhang. “But I do physics, so that is not an acceptable answer.” While everyone else carried on playing the game, Zhang says he worked out that the sunset should be delayed by a few minutes at their current height. “Sometimes problems just stick and then you just have to solve it,” he says. “Or you want to solve it just because you can.”

A desire to understand the world around him is what drives Zhang’s studies, as well as his research. Since his junior year, Zhang has worked in the lab of Isaac Chuang focusing on quantum information, as well as atomic, molecular, and optical (AMO) physics. As Zhang explains, while everything is made up of atoms and molecules, AMO physics examines the uniquely atomic and molecular properties that occur at very low temperatures, or when a single atom is trapped in free space, for example. His current research involves trying to implement a simple quantum algorithm in real life through an experiment on a single ion of the element strontium.

He also enjoys seeing physics come to life. “Your professors weren’t lying when they say atoms behave really weirdly,” Zhang says. “Experimental AMO is an opportunity for you to see all the wacky things they promise you happen in physics theory classes. You can actually see and measure that behavior in real life.”

While he came to MIT confident in his academic pursuits, Zhang said he expected to have to give up playing the piano in order to focus on his studies. But Zhang had played since he was 7, and said he started to realize how much he enjoyed it. Impressed by all he learned about MIT’s music program, he auditioned for an Emerson Scholarship. He was selected for the program, which helps fund piano lessons for talented students. He has largely studied with David Deveau, a senior lecturer in music at MIT.

“Slowly, instead of phasing it out, piano became an even larger part of my life than it was before coming here,” Zhang says.

It’s even become a priority for Zhang to learn about the music departments in the schools he’s applying to for graduate work.

“People will ask you whether music informs physics or vice versa. I think the answer is: not really, but I think they’re very complementary,” Zhang says. “It’s just very nice to have something completely unrelated to academics to think about and work on.”

Beyond the break it affords, Zhang says playing piano was a great way to connect with new people. He says he met one of his closest friends, a violinist, in a piano trio on campus, and that he has found the MIT undergraduate student body to be very musical.

During his first year at MIT, Zhang surprised himself by signing up for yet another activity outside of academics. After a friend convinced him to audition, Zhang joined the MIT Asian Dance Team. “I had absolutely zero experience with dance coming into MIT,” he says. “But now I have been dancing my whole time in undergrad — poorly, I will add.”

In addition to acting as stress reducers and opportunities to work hard physically, Zhang says these non-academic activities helped him grow as a person. Music, he says, helped him become more observant about how he spends his time and makes decisions about how to maximize his study and practice time. Both music and dance helped him look at himself differently. “I came into MIT not necessarily shy, but also perhaps maybe not fully comfortable with myself,” Zhang says. “I think working on piano very deeply and trying out dance, both have done a lot in helping me feel more confident and comfortable as myself.”

Zhang also joined the MIT Association of Taiwanese Students (ATS), and eventually became co-president for his sophomore and junior years. While Zhang isn’t Taiwanese, he said joining ATS was more about building community and spending time with people with similar interests.

“There is something so nice about sharing unique parts of your culture with other people who may not have grown up with the same culture, but who also find it interesting,” he says.

While each of his pursuits added to his MIT experience, Zhang says he’s the first to admit that it was sometimes more than he could readily manage. “I spent most of my time at MIT doing way too much,” he says. “I was always thinking about commitments.”

As a senior, Zhang has a slightly lighter course load and fewer extracurricular activities. He says this reduced plate has allowed him to catch his breath a bit and enjoy his final year at MIT.

“College is important to set you up for your future, but it also is an experience to be enjoyed in and of itself,” he says. “It’s amazing to have more free mental time.”

Plus, Zhang says, “it’s where a lot of unexpected breakthroughs happen.” During rehearsal for a piano trio he was a part of, for example, Zhang remembers a special moment when he let his intuition guide his playing. “I suddenly thought, what if I add pedal, but just like a very small amount of pedal? Maybe it will sound better,” he says. “And it did. If I were just drilling, drilling, drilling sections, I wouldn’t have had that realization.”

Leaving room for improvisation is just one of many lessons Zhang says he’s learned at MIT. “I decided to come because I thought there would be a lot of people I would click with, and I thought this would be the best place for me to grow,” he says. “All of that has been borne out by the past four years.”

After graduation, Zhang plans to attend graduate school to continue studying physics and satisfying his curiosity about the natural world. In physics, he says, there’s still so much to explore.

This article was also posted at MIT News.