It all adds up

MIT students train teams in Ghana and Uganda for the International Mathematical Olympiad through MISTI-Africa. 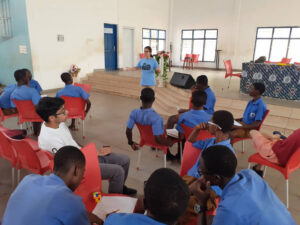 Carolina Ortega, a third-year mathematics student at MIT, talks with students as part of a MISTI-Africa program to connect MIT mathletes with their Ghanaian counterparts. Image: Joel Dogoe

The International Mathematical Olympiad (IMO) is more than a math competition for high schoolers: It’s also a springboard for subsequent success. The MIT delegation that annually dominates the Putnam Mathematical Competition is largely composed of alumni of the IMO and related math competitions. Many of these mathletes remain involved by producing training or prep courses and study guides, like the popular Euclidean Geometry in Mathematical Olympiads by Evan Chen ’18, a PhD student in the Department of Mathematics, which is read by aspiring contestants around the world.

Now, a new program invites MIT undergraduates, particularly those with a background in competition mathematics, to travel across the globe to train the national teams in Uganda and Ghana.

“MIT is a magnet for talent,” says Chris Peterson, a senior assistant director in the MIT Admissions Office. Enabling alumni to assist the next generation of competitors factors into MIT’s campaign of creating a better world. “I think anything we can do to help spread the intellectual wealth concentrated at MIT, while giving our students a global education, is a win-win,” Peterson says.

The goal is not just about helping African teams to place at the competition. A recent study by economists at the International Monetary Fund and University of Bath suggests that the skills honed by math contests help contribute to mathematical productivity and economic prosperity down the line. “It helps to identify and develop a critical mass of problem-solvers who will help develop the world,” explains Joel Dogoe, who founded the Mawuenyega International Science and Engineering (MISE) educational non-profit program in Ghana that recruits and trains the country’s IMO team and has collaborated with MIT before.

In the summer of 2019, Dogoe worked with Ari Jacobovits in the MIT International Science and Technology Institute (MISTI) Africa program to fly three MIT students to Ghana for the summer. After working with the MIT students, the Ghanaian team received honorable mention at the 2019 IMO — the first award they have received in their five years of participation.

“I couldn’t believe it after only a single joint program,” says Jacobovits. “It became clear that we needed to scale up and get organized. Now my focus has extended to working with our partners to bring an IMO medal to an African country. The talent is there, and it would mean so much not just for the country, but for the whole world to see.”

Part of that “getting organized” meant securing funding, which had not been established for that trial run. That’s when MIT’s Department of Mathematics stepped in to offer support, and the program was able to build up its numbers.

“We are fortunate at MIT to have students who are not only mathematically brilliant but also care about helping others develop their passion for mathematics,” said Professor Michel Goemans, head of the Department of Mathematics. “It is an amazing experience for both the MIT students and these students from Ghana and Uganda. This program provides the talented students from these African nations the opportunities and mathematical resources that they would not otherwise easily have access to.”

The students spent three weeks training the local African IMO teams and organized STEM outreach with local school visits. Eshaan Nichani, a senior double majoring in Mathematics and Computer Science and Engineering, explains that in Ghana, they spent the first week at the IMO training camp and the second week touring 11 middle and high schools to discuss college in the United States, MIT, and mathematics.

“The three letters M – I – T bring a lot of excitement to science and math enthusiasts all over the world and Ghana is no exception,” says Dogoe. “In some schools, it was difficult to leave because the [Ghanaian] students kept engaging the MIT students well into the night.” Nichani recalls one student, who showed off his homemade generator, told him that MIT is his dream school.

The largest hurdle Sean Elliott, a first-year in Course 18 (mathematics), encountered in Uganda was providing the Olympiad students with challenging enough problems to satiate their curiosity. Elliott, who attended the elite Mathematical Olympiad Summer Program, which trains students for the American IMO team, joined the MIT community because of its passion for STEM and strong culture of collaboration.

“One thing that became clear while working with these students is that they have similar levels of talent in math compared to students in the U.S.,” says Michael Ren, another MIT Course 18 student who earned a gold medal at the IMO in 2018 and is in his second year at MIT, but their abilities and passion for math are limited by their lack of access to resources.

Violet Felt, a third-year student majoring in electrical engineering and computer science, agreed. “It was a surreal adventure: We were teaching complex graph theory and proof techniques in an open-air classroom with one blackboard, no WiFi, no electricity,” she says, “but the same kind of smart minds you find every day at MIT.”

Professor Hazel Sive, faculty director for MISTI-Africa and director of the MIT-Africa Initiative, visited the Uganda program. “This is a fantastic contribution by the MIT Mathematics Department. Our students ran an outstanding program for the best high school math talent in Uganda. The Ugandan students were exceptional, and we hope some will be attracted to apply to MIT.”

For many of the MIT students, the camp was also a unique chance to improve their teaching skills, especially in a different setting than on campus — an important trait to develop for their potential careers in academia. Because the partnership is so new, the lessons, handouts, and lectures were all generated by the student trainers. They stayed up late to grade the exams of as many as 70 students in the case of the Uganda team. This year’s IAP travelers laid the groundwork for a consistent training structure and schedule.

In addition to a teaching opportunity, the program also provides a broader view of the world from a new perspective. Several of the trainers mutually declared their favorite moments of the trip being the times they learned about lifestyle differences and similarities between Americans and Ghanaians. They recalled in one presentation in particular that involved a discussion about prom – with a lot of laughter.

Although these students will have to wait until the summer to hear how their pupils perform at the 2020 IMO competition, which will take place in Russia in July, the overall feeling of the program is one of success. Ren pointed out that after their return to MIT, several Ugandan students messaged them in appreciation, one of whom admitted that he came to the camp for the socialization and stayed for the math.

The students, organizers, and participants equally expressed hope that this partnership continues and grows. “Personally, I would love to see this program expand, both to more countries in mathematics and in other fields such as physics, chemistry, and biology,” says Peterson. These fields have analogue competitions, each with their own networks of alumni. “I could easily imagine a future where every January, dozens of MIT undergrads with Olympiad experience deploy all over the world to help share their knowledge with, and bring back insights and experiences from, like minded students in other countries.”

When asked if he would participate in the MISTI-Africa IMO program again, Elliott responded with a resounding “Yes!” and all recommended the experience to other students. By Ortega’s reasoning, it provides an unique opportunity to share a passion for math and encourage students, as well as dispel existing math stereotypes. For her, “it has always been very important to think of what I can do with my knowledge for others,” says the mathematics third-year and two-time former Colombian IMO team member.

As Peterson notes, “This is really such an incredible opportunity to mix global education with mission-driven service in a way that few schools are as well-positioned as MIT to provide.”