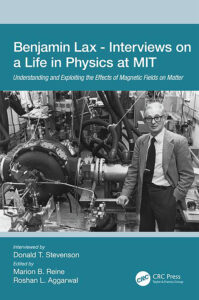 In a series of autobiographical interviews published in the book Benjamin Lax – Interviews on a Life in Physics at MIT: Understanding and Exploiting the Effects of Magnetic Fields on Matter (CRC Press, December 2019), former Professor Benjamin Lax PhD ‘49 reveals what life was like in the MIT Department of Physics over his 60-year career.

A centenarian, Lax was born in Hungary in 1915 and passed in 2015 in the United States after his family emigrated to New York. His first introduction to MIT was during his service in the U.S. Army at the MIT Radiation Lab as a radar officer. He continued his studies on the generation of radar, completing a graduate degree in 1949 under Sanborn C. Brown in the Department of Physics.

In the 1950s, he played a major role in the construction of MIT Lincoln Laboratory’s semiconductor and ferrite research groups, became head of the Solid-State Division in 1958, the founding director of the MIT Francis Bitter National Magnet Laboratory, established in 1960, and in 1964, took on the role of associate director at Lincoln Labs. Lax then became a professor in the Department of Physics for over 20 years until his retirement.

In his interviews, Lax discusses the challenges, opportunities, and people he encountered on his journey through solids in magnetic fields, including a wide array of members of MIT Physics, research colleagues, students he mentored (which number above 50), and personal friends. Lax gives insight into life within MIT’s Department of Physics as well as a glimpse of his notable research and the many lives he impacted during his long life.