Getting Africa on the climate-change grid 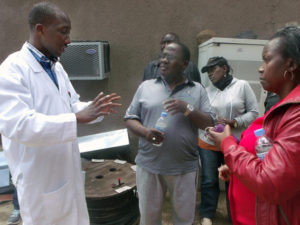 Jimmy Gasore gives a tour of the Rwanda Climate Observatory to scientists from East Africa and the European Union.

The exponential increase of greenhouse gases since the industrial revolution has been constantly shifting the global climate to a dangerous level, suggesting an urgent need for an immediate and sustained global mitigation. Strategies for emissions reduction are usually implemented at the national and regional level, requiring that the amount of emissions and the geographical distribution of their sources be known at national and regional scales, as well. Information on greenhouse gas emissions and the sources of their distribution is readily available in most of the developed world, thanks to computing power and human capacity. A different picture, however, emerges from developing countries; for example, there is no long-term high frequency greenhouse observing station on the entire African continent. Since Africa covers a fifth of the world’s landmass, this is no small piece of lost data. Thus the ultimate goal of my research project: getting Africa on the climate-change grid.

Tropics in general – and in Africa in particular – have contributed a significant share of greenhouse gas emissions from agricultural activities, wild fires, and deforestation; during the end of the last decade, tropical wetlands played a central role in the increased presence of atmospheric methane. Emissions from sources like these constitute the most uncertain element of the global carbon budget. Still, “lack of data” is the only term used to describe Africa’s emissions.

I am building the first high-frequency climate observatory station in Africa, located in the Republic of Rwanda. I will then use the resulting data to estimate emissions of carbon dioxide and methane in Eastern and Central Africa. Quantifying tropical African emissions will not only support regional and national emission reduction policies, but also reduce the largest uncertainty in the global carbon budget – thereby adding a piece of new understanding to the climate-change puzzle.

Choosing the right place to host the climate observatory station was a challenge by itself. First, logistical considerations like power supply, accessibility, and laboratory space were considered. Second, and most important, were the technical considerations: The station had to be away from cities and towns and higher in altitude in order to measure background concentration. Moreover, a large station “footprint” was preferred, as it would allow for sampling a larger region with just one station. The footprint, which is a map of all possible origins of air masses arriving at the station, is obtained by running computer simulations that follow the trajectory of air mass in the backward direction. Those criteria were met by Mount Kalisimbi, a 15,000-foot extinct volcano located in the Northwest Region of the Republic of Rwanda. Computer simulations of trajectories of air masses coming to Mount Kalisimbi indicate that this location can sample air masses from Egypt and Saudi Arabia in the north, India and the Indian Ocean in the east, Madagascar in the south, and all the countries in between, with some extension into Western Africa. The high elevation of Mount Kalisimbi allows measurement of the “background” concentration, which is free from the contamination of pollution from local sources. In this respect, Kalisimbi has attributes of a global observatory sampling the entire troposphere.

Because of the high elevation of Kalisimbi, accessibility is a challenge for now. Luckily, the government of Rwanda is building a cable car to the summit for ecotourism, which will also allow regular access to the station and other infrastructures on the summit. While waiting for a cable car, I am operating on Mount Mugogo, which is a temporary station near Kalisimbi. With its altitude of 8,500 feet, Mugogo does not have the attributes of a global station but is perfect for a regional climate station; in fact, it is the data from Mount Mugogo that I will use to estimate regional emissions. At Mount Mugogo, I test and install instruments and train local station technicians. I am currently measuring carbon dioxide, methane, carbon monoxide, ozone, solar radiation, and other meteorological variables.

In addition to setting up a climate observatory station, I will be using inverse methods to estimate surface sources and sinks of carbon dioxide and methane in Eastern and Central Africa.

The process of estimating surface emissions from atmospheric concentration is much like going back in time, which is why it is called an inverse problem. Gas molecules are emitted by human activities like cars and power plants, as well as by natural processes like those that take place in wetlands. After emissions, the gas undergoes physical processes; namely, mixing and transport by winds, chemical transformations fueled by solar radiation, and chemical reactions with other atmospheric constituents. The combination of these physical and chemical processes determines the concentration of a certain gas measured at a given time and place. On the other hand, inverse emissions estimation starts by measuring atmospheric concentrations of greenhouse gases and meteorological information, then estimating what was emitted at the surface by carefully going through all the chemical transformations and physical mixing undergone by the gas molecules in the reverse direction. This technique requires powerful computers and advanced mathematics.

At the end of this project, I will provide the very first comprehensive regional high-frequency observation-based emissions estimation for Central and Eastern Africa. This information will be the basis for regional carbon policies and improve the current understanding of the global carbon budget. Furthermore, the estimated sources and sinks of carbon dioxide and methane will provide to the scientific community additional data for comparing and checking global inversion studies, calibrating ecosystem models, and verifying regional emissions.