Science as the foundation and future of artificial intelligence 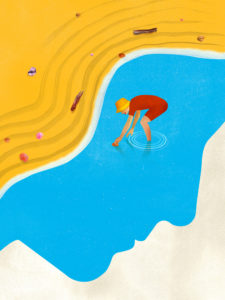 Although advancements in artificial intelligence — powerful computers, speech and facial recognition, self-driving cars — are making dramatic transformations in our lives, the field is still in its infancy. The gap between the abilities of the human brain and current artificially “intelligent” systems is huge. From determining whether you have met someone before, to a toddler learning from a single example, everyday experience is full of feats whose computational underpinnings remain mysterious.

If scientists are to succeed in building systems that match the human brain in capabilities and performance, then they must address two central questions in field of intelligence: How does the brain produce intelligent behavior, and how can we replicate it in machines? In other words, how can we reverse engineer the human brain?

“Our brain is the world’s most powerful computer,” explains Jim DiCarlo, Peter de Florez Professor of Neuroscience and head of the Department of Brain and Cognitive Sciences (BCS). “If we can understand how the brain produces intelligent behavior, we can revolutionize the field of artificial intelligence, transform the types of technologies and machines that can be built, and better understand ourselves.”

A new chapter in MIT’s Quest for Intelligence

The success of the Intelligence Initiative helped secure a five-year $25 million award from the National Science Foundation to establish the multi-institutional Center for Brains Minds and Machines (CBMM), led by Poggio. Now in its fifth year, CBMM has helped found an entirely new field — the science and engineering of intelligence.

CBMM is comprised of more than 200 students, researchers, and faculty from more than 18 top universities and research institutes around the world. By helping to overcome the traditional research silos that have divided intelligence research, the center has been incredibly productive; collaborative research teams have produced close to 400 publications, advancing our understanding of many aspects of intelligence including visual recognition and perception, the neural circuits that underlie intelligence, the development of perception and language, and the impact of social interaction on these processes.

This February, MIT began a new chapter with the launch of the Quest for Intelligence. This new Institute-wide initiative aims to discover the foundations of human intelligence and drive the development of technological tools that can positively influence society. The Quest will be led by two entities: the Core and the Bridge. The Core expands upon CBMM’s foundation, supporting scientific and engineering research and discovery efforts in BCS, CSAIL, and beyond to “reverse engineer intelligence,” while the Bridge focuses on the applications and pedagogy of these efforts.

Research at the Core of the Quest

The Quest symposium in March showcased the type of moonshot science that the Core is designed to support: bold fundamental research on the human mind that promises to lead to major breakthroughs in in the field of artificial intelligence. Presentations touched on several areas that are important for advancing our understanding of biological intelligence and the capabilities of artificial intelligence including how humans, especially children, learn.

BCS professors Laura Schulz, Rebecca Saxe, and Joshua Tenenbaum are trying to understand how humans learn, form theories about the world, and process information. The broad goal is to build a machine that grows into intelligence the way a human does — that starts like a baby and learns like a child. Schulz’s online platform, Lookit, which collects large datasets on how infants and young children learn, and Saxe’s magnetic resonance imaging of awake infants, which tracks the development of brain region specificity and activity, will help us decode and build the algorithms that underlie common sense reasoning and learning.

“Children are the only system in the known universe that demonstrably, reliably, and reproducibly, build human-level intelligence,” said Tenenbaum at the symposium. “Only now do we have a scientific field studying how children learn and think that is mature enough to offer guidance for AI.”

Faculty within the School of Science are also developing projects to uncover how the brain processes and integrates sensory information. Despite advancements, machines still struggle to interpret a scene as quickly or fully as humans do or recognize objects and sounds presented in new ways.

“Humans experience a world made of objects that we simultaneously see, hear, feel, smell, and taste,” says Josh McDermott, Frederick A. and Carole J. Middleton Assistant Professor of Neuroscience, adding that advancing AI “beyond conventional machine perception, which currently associates images or sounds with labels, will require inferring information from multi-model input.”

The Quest Core faculty will provide critical resources to a broad range of intelligence research including language, spatial navigation, and intuitive reasoning. This cross-disciplinary approach presents exciting opportunities to replenish the wells of AI algorithms. “The science of intelligence is not just one problem, but many problems requiring many separate research breakthroughs,” says Poggio. “Our best bet to make progress is the collaboration of many different labs and research approaches.”