From streams to teams

Graduate student Maya Stokes, a geomorphology expert and ultimate frisbee coach, shows her passion for teaching in the field and on the field. 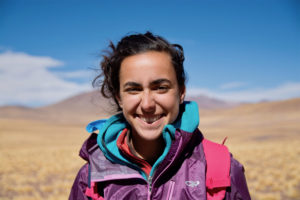 If you’ve ever looked out the window of an airplane, you might have seen beautiful meandering and braided river systems cutting their way through the Earth. Fly over that same area again a few years later, and you’ll witness a different landscape. On geologic timescales, geomorphology, the study of how the Earth’s surface is shaped and evolves, involves the most rapid processes.

“You can observe changes in the paths that rivers take or landslides that dramatically alter hillslopes in a human lifetime. Many geologic processes don’t allow you that opportunity,” says Maya Stokes, a fourth-year graduate student in the Department of Earth, Atmospheric and Planetary Sciences (EAPS) who researches rivers.

Stokes wasn’t always interested in geomorphology, although her love for the outdoors stems from a childhood in Colorado. She entered Rice University in Houston with an interest in science and spent some time as an undergraduate trying out different fields. Fascinated by the history of the Earth and life on it, she narrowed her search down to Earth science and ecology and evolutionary biology. A class on geomorphology won her over. Being able to pursue a career that allowed her to work outside was also an enticing perk.

At MIT, Stokes now conducts research with Taylor Perron, associate department head of EAPS and associate professor of geology at MIT, who is an expert in riverine erosion in mountains. She also collaborates with Tom Near, an evolutionary biologist at Yale University, enabling her to combine her two areas of interest. Her research focus lies at the intersection of geology and evolutionary biology. While exploring how rivers evolve over time, she simultaneously investigates how the ecosystems within those systems evolve in response.

You can think of it like two carloads of people on a road trip. One car crosses a bridge toward a major metropolis, but shortly after, construction closes the bridge and forms a detour sending the second car traveling through a rural farmland. Those two carloads of people will have different experiences, different meals and lodging, that are unique to their car’s particular pathway.

Stokes focuses on specific pathways — freshwater environments — and the interplay of biology and streams has some dynamic features. “As shown by the recent UN report, understanding and maintaining biodiversity is a high priority goal for building a sustainable future on Earth,” she says in reference to the 2019 global assessment report conducted by the Intergovernmental Science-Policy Platform on Biodiversity and Ecosystem Services.

To get more hands on, Stokes investigates how related fish are to one another in the United States. She collects both genetic and geologic datasets, processed with the help of a University of Massachusetts at Amherst geochemistry lab run by Isaac Larsen. She has been on three trips to collect data, mostly in the Appalachians, a location of which she’s grown fond, because, she explains, “The topography is rugged, the streams are clear and beautiful, and the landscape is saturated with life.”

Specifically narrowing to the Tennessee River, Stokes and her collaborators are observing how several populations of the Greenfin darter fish (Nothonotus chlorobranchius) have been separated, possibly as a result of knickpoints, or sharp changes in the slope. Last year, she published a paper in Geophysical Research Letters that predicts a rerouting of the upper Rio Orinoco into the Rio Negro in the Amazon River basin, which is summarized in a blog post on the website of the American Geophysical Union.

“Stokes’ ambitious project requires a blend of versatility, creativity, determination and intellectual fearlessness. I think she has that rare combination of talents,” says Perron. In order to explore the scope of her research fully, Stokes expanded her resources beyond MIT, successfully applying for funding to take short courses and field courses to achieve her research goals.

“I love the intellectual freedom that’s been awarded to me [at MIT]. It’s made my PhD feel authentic, exciting, and very much mine. I think that the culture of intellectual independence is strong at MIT, and it’s very motivating to be around,” says Stokes. She’s grateful to have received research support from MIT’s Office of Graduate Education as a Hugh Hampton Young Fellow and through a fellowship from the MIT Martin Family Society of Fellows for Sustainability.

Hoping to continue to investigate these questions long after her PhD, Stokes plans to become a professor of the history of the Earth and how it influences the evolution of life. MIT has provided Stokes the opportunity to build her teaching skills as a teaching assistant for incoming undergraduates at Yellowstone National Park on four occasions. Explaining the volcanic and natural history of the area, she reveled in the chance to entice new students to delve into the study of the wonderful and constantly evolving Earth. Stokes was recognized with an Award for Excellence in Teaching in EAPS earlier this year.

Stokes’s leadership skills also led her to serve as president for the EAPS Student Advisory Council (ESAC), and to help start an initiative for a universal first-year course for all EAPS graduate students. She also worked on an initiative started by her fellow EAPS graduate student Eva Golos to allow students to provide input on faculty searches. Recently, she was honored at the MIT Office of Graduate Education’s 2019 celebration of Graduate Women of Excellence, nominated by her peers and one of three in EAPS selected based on “their exemplary leadership through example and action, service to the Institute, their dedication to mentoring and their drive to make changes to improve the student experience.” When not on trips to muddy waters, Stokes regularly joins EAPS post-work gatherings with trips to the Muddy Charles, MIT’s on-campus bar, forging deep friendships.

Stokes still manages to spend most of her time outdoors, teaching, outside the realm of Earth science. She coaches the women’s ultimate frisbee team at MIT and plays on regionally competitive teams in the Boston area. “It’s also allowed me to interact with undergraduate students at MIT through coaching which helps me feel more tapped into the MIT community at large. I’ve learned a lot about teamwork, leadership, and teaching from the sport,” she says.

Stokes’ advisor speculates that she will continue to stand out after she graduates with her doctorate from MIT. “She has demonstrated strong commitments to teaching undergraduates and communicating science to the public,” says Perron. “I expect that she will be a leading researcher in science working at the intersection of the physical environment and biological diversity.”