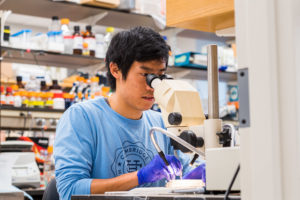 As a developmental biologist, I study how a single cell becomes a complete animal — how nature makes something from almost nothing. The growth of an embryo seems mysterious because new tissues and intricate body parts arise from what previously seemed to be an inert lump of cells. Like origami, layers of cells grow, flatten, and fold over themselves. Neurons are strung from one end of the undeveloped body to the other. A transparent heart is assembled and begins to beat even before it fills with blood.

I was first captivated by embryonic development as an undergraduate at Oberlin College. Copying diagrams from textbooks or walking back from lab, I would ask myself: How does an embryo know how to build itself? There must be some inner logic of cells — a flow of information when sperm meets egg that spreads over time and space, always reinforcing itself and always growing in complexity, to shape what we become, both in personality and appearance.

For the past five years, I’ve studied development as a graduate student in MIT School of Science’s Department of Biology. My research, performed in Professor Hazel Sive’s laboratory at the Whitehead Institute, focuses on face development. Faces are our portal to the world and aid us in interacting with our surroundings but, more broadly, they are the basis of our identity. We remember the smiles or mischievous glances of family and friends while the images of celebrities like Marilyn Monroe or Muhammad Ali are cultural icons.

Despite the importance of faces and a rich history of research, scientists still endeavor to better understand how the face forms. Face formation is complicated and beautiful for several reasons. Many different types of cells, some migrating long distances, come together to form sensory structures like the eyes, ears, and nose. To make a mouth, the embryo carefully opens a hole in itself. The growth of the face affects, and is in turn affected by, the development of the brain. This complexity is reflected in the prevalence of craniofacial defects, such as cleft palate or microcephaly, which are the most common types of birth defects and, in the United States, occur in one out of every 700 live births. The cause of craniofacial defects remains largely unknown and correcting such defects, when possible, may require multiple laborious and traumatic surgeries.

Central to the question of how faces form is where the information to make the face comes from. Years of work by labs across the world has shown that instructions for development are found in different areas of the face. The Sive laboratory has been working to understand one example of this arrangement: the relationship between two facial structures termed the neural crest and the Extreme Anterior Domain (EAD). The neural crest is a migratory group of cells that originates on the edges of the brain. During development, neural crest cells travel into the growing face, still mostly a blank slab of tissue, and become cartilage or bone that gives the face its three-dimensional structure. In contrast, the EAD is a small patch of cells at the anterior of the embryo that sends out signals to direct the behavior of nearby tissues.

Having information distributed throughout the head may seem unnecessarily complicated but this arrangement ensures that development is synchronized. The head is a collection of interlocking parts — the neural crest, the mouth, the eyes, the brain — that not only have to form themselves but also coordinate their growth with each other. To make a functional head, the neural crest cannot begin migrating too early or late, or start forming cartilage while it is still travelling into the face, or become an upper jaw instead of a lower jaw. By relying on neighboring tissues for cues, neural crest cells execute these steps at the right time and location so that the skull is formed properly.

By identifying the EAD in frog embryos, the Sive laboratory has added another layer to the story of face development by showing that cells outside of the neural crest also determine head shape. In 2014, a team of two graduate students, myself and a postdoc, discovered the importance of the EAD by analyzing early frog embryonic development when the beginning of the face emerges. At the two-day stage, the frog embryo is beige-colored and shaped like a kidney bean. The neural tube, which eventually becomes the spine and brain, is just a crease over the back of the embryo. The face is smooth except for two mounds that will become the eyes. Using a method to visualize gene expression as purple stains, we observed that the center of this early face expressed genes used in cell signaling and communication.

To test the importance of signaling factors, we employed molecular techniques to interfere with gene function in the roughly 500 cells that comprise the frog EAD. When we disabled a set of genes required to generate nitric oxide, we observed that neural crest cells faltered during their migration and failed to completely populate the head. Because of this defect, 7-day-old tadpoles had abnormally developed faces. Nitric oxide has previously been shown to regulate blood pressure by dilating arteries but its role in face formation has never been observed before. In a second experiment, we transplanted an extra EAD into the side of the face. This caused neural crest cells to deviate from their normal path and travel toward the transplanted tissue. Together, these results demonstrate that the EAD acts as a beacon for neural crest cells and guides their migration into the face.

In the future, the Sive lab will study the EAD in more detail. Aside from the genes regulating nitric oxide production, the EAD expresses many other genes required for cell signaling in other parts of the body. This suggests that the EAD may perform multiple functions during head development such as controlling cell survival and proliferation. Additionally, although the EAD was initially discovered in frog embryos, tissue analysis suggests that the EAD may be a conserved structure present in all vertebrates and even sea urchins. In addition, by understanding how cells communicate with each other and what can go wrong, researchers could design new treatments for patients with craniofacial defects. Scientists are investigating whether head abnormalities can be fixed with targeted drug delivery or a single surgery while the patient is still in the womb. An early intervention may prevent small abnormalities from getting worse over time and also could take advantage of the fetus’s enhanced healing ability, allowing tissue to regenerate without scarring.

Despite discoveries in the Sive lab and other laboratories around the world describing the interactions between different parts of the growing face, the process of development is still mysterious to me. I’m still asking how does an embryo know how to build itself? There seems to be a perpetual cycle where the more I learn, the more questions I have, and the more I realize how many things I don’t know.

One change in my thinking is that I no longer imagine embryos being built from cells, but rather as built from the relationship between cells. If I see two adjacent layers of tissues, I think to myself that they are probably communicating and influencing each others’ behavior. When I see a cell, I imagine its history of interactions with other cells amid the tumult of the growing embryo. It’s this chronology of cells, the places they have been, and the signals they have received that form the human body — the beating heart, the electric brain, the face we see when we think of ourselves.