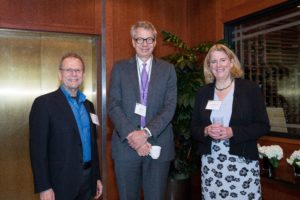 On October 23, 2019, the Department of Physics hosted a breakfast in Palo Alto, California, featuring Jacqueline N. Hewitt, Julius A. Stratton Professor in Electrical Engineering and Physics and former Director of MIT’s Kavli Institute for Astrophysics and Space Research (MKI). Professor and Department Head Peter Fisher began the morning by thanking the more than 100 alumni and friends for their continued engagement with MIT. He then introduced Hewitt, who explained how MIT’s Transiting Exoplanet Survey Satellite (TESS) got off the ground.

Hewitt said that the MIT-led NASA mission began as a continuation of some big questions such as: Are there planets outside our solar system orbiting around other stars? This original question was answered in 1995 by Michel Mayor’s and visiting scientists at MKI Didier Queloz’s discovery of an extrasolar planet, 51 Pegasi b. Now, with TESS data pouring in and Mayor’s and Queloz’s receipt of the 2019 Nobel Prize in physics, the field of exoplanets has coalesced into a prominent field of astrophysics and space research.

Hewitt went on to say that TESS is helping answer other questions, such as: Are there a lot of planets? Are these exoplanets in what we understand to be the “habitable zone” — with the right conditions for life? TESS was launched in April 2018 to spend two years identifying these potential planets and providing fodder for follow-up inquiries about their atmospheres. The discovery of more than 1,200 candidate exoplanets, 29 confirmed exoplanets, and the potential for more discoveries such as black holes tearing apart nearby stars, has led NASA to extend the TESS mission for another two years, Hewitt said.