Changing the way we “do science”

MIT's Department of Biology as a source of convergence 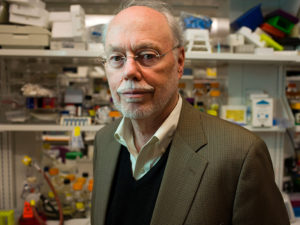 In the next decade, the world will face growing challenges that can be answered by the life sciences: providing better health care at a sustainable cost, economically transforming plant cellulose into transportable fuels by genetically engineering organisms and more efficient enzymes, and feeding a growing world population by opening up arid climates and high-salinity soils to farming through the genetic engineering of plants. All of these must be done in parallel with maintaining and improving the environment, including reducing global warming. However, to garner the benefits of revolutionary advances in molecular and genetic engineering, the life sciences must converge with the physical, mathematical, computational, and engineering sciences.

“Convergence” does not mean that different fields of study merely share their tools, but rather that the fields come together to re-conceptualize approaches to research and solving problems. While the progress toward convergence is a national and international phenomenon, MIT has an important leadership position in the movement. The modern Department of Biology was established through the convergence of physical sciences and biology in the middle of the last century, and the department has since then contributed enormously to bringing life sciences to a period of even greater engagement through convergence.

The first revolution in convergence was born from the discovery of the structure of DNA by a physicist, Francis Crick, and a biologist, James Watson, thereby changing the focus of the life sciences to molecular biology and genes. MIT staked its position in the movement when Salvador Luria, the thesis mentor of James Watson, was recruited to the department in the late 1950s to strengthen molecular biology. Luria would go on to receive a Nobel Prize with his close friend and collaborator, the physicist Max Delbrück, as well as with geneticist Alfred Hershey.

Over the years, many faculty in the Department of Biology were trained in physical, mathematical, and engineering sciences before turning to questions of the life sciences. The career of Paul Schimmel at MIT is an example of this progression. Trained as a polymer chemist at Stanford with Paul Flory, recipient of a Nobel Prize in Chemistry, Schimmel was recruited to MIT by the Chemistry Department but migrated to the Department of Biology early in his career in order to pursue his important work on the specificity of transferring information from the genetic code in DNA to proteins.

Since the recruitment of Salvador Luria, genes and their applications have been a major focus of MIT’s Department of Biology. The importance of this focus to the success of MIT biologists can be tracked through the several Nobel Prizes that would follow: Luria’s discovery of genetic traits in bacteria, Gobind Khorana’s synthesis of the first gene (Khorana’s primary appointment was in chemistry), David Baltimore’s discovery of the reverse transcription of RNA sequences to DNA sequences, Susumu Tonegawa’s discovery of DNA rearrangement as the basis for immune diversity, Robert Horvitz’s discovery of the genes controlling cell death, and my own discovery of the split gene structure in higher organisms. Beyond this, many trainees of the department have made similar contributions with comparable recognition. Importantly, this focus on genes and molecular biology became the nucleus of the powerful biotechnology cluster in Kendall Square. Innumerable patients have benefited from the translation of this basic science to technology advanced at MIT through the proximity of this biotech cluster.

The latest wave in convergence involves combining molecular and cellular biology – in which MIT has so long been a leader – with genomics, engineering, and knowledge of physical sciences. Engineers have engaged in life sciences in the past, so what is new about today’s convergence? In the past, biology and biomedical sciences have benefited greatly from the quantitative approaches and technology of engineers and physical sciences. Examples of previous successes range from heart pacemakers to massive bioreactors producing antibiotics. Many of these contributions have been at the level of whole organism physiology, as well as at the level of organs and tissue. Today, however, new opportunities to converge life sciences with physical, mathematical, computational, and engineering sciences are found at the molecular level.

MIT has committed to leading the new wave of convergence by making broader engagement in the life sciences possible for faculty members working across the Institute. Through the growth of the Department of Biology and the proliferation of new departments, research centers, and educational programs (see timeline below for more details), MIT continues to bring faculty and students together from the life sciences, physical sciences, mathematics, and engineering. As a result, our faculty are making advancements in the treatment of cancer, the editing of the genome, and using bacterial viruses to make batteries and solar cells. They are poised to make a second biotechnology renaissance here in Cambridge.

The Path to the Future of Life Sciences

MIT as a whole has evolved with broader engagement in life sciences through the growth of the Department of Biology. Expansion of the department occurred with the opening of the Center for Cancer Research in 1974, agreement of affiliation with the Whitehead Institute in the early 1980s, establishment of the Department of Brain and Cognitive Sciences in 1991, and two neuroscience-oriented institutes – the McGovern Institute in 2001 and the Picower Institute in 2002. More recently, affiliations with the Broad Institute and Ragon Institute have furthered this scope. The faculty in the life sciences of the Departments of Biology and Brain and Cognitive Sciences have grown from roughly 46 in 1974 to over 130 in 2014. As a centerpiece of the evolving convergence movement at MIT, 12 cancer biologists from the Center for Cancer Research joined 12 engineers from several departments to create the Koch Institute for Integrative Cancer Research in 2008.

Important Institute-wide decisions accelerated the spread of convergence on campus. A particularly significant one was the requirement that all students needed to be educated in the core principles of modern biology. The first class with a biology requirement graduated in 1997. In parallel with this, many faculty from engineering departments at MIT took a one-week “bootcamp”-type course taught by faculty in the Department of Biology.

Reports and articles attempting to project the promise of this trend can be found on the MIT website www.convergencerevolution.net.