Celebrating the collaborative and creative champions of BCS 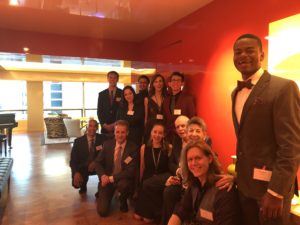 On October 21, 2019, the Department of Brain and Cognitive Sciences (BCS) held its sixth annual Champions of the Brain Fellows reception in New York. The event celebrates predoctoral scientists in BCS, and the friends and alumni who make it possible for them to explore their scientific pursuits and support the department’s exciting research. The evening was hosted by Al ’51 and Barrie R. Zesiger HM, founding Champions of the Brain Fellows.

Barrie Zesiger, MIT Corporation Life Member, and Professor James DiCarlo, BCS department head, opened the event by welcoming guests and introducing Professor and Nobel Laureate Susumu Tonegawa and Assistant Professor Evelina Fedorenko, the newest addition to the BCS faculty. Conversation centered around the path to brain and cognitive sciences, the successes and failures along the way, the motivation and imagination required to be successful as a scientist, and why MIT is a unique place for pursing ground-breaking research.

Tonegawa remarked that great science would not be possible without the creativity and collaborative nature of graduate students, highlighting how new and exciting ideas are often driven by graduate students who are adept at finding new ways to collaborate with other labs within BCS and across campus. Fedorenko echoed that sometimes students come up with “crazy ideas” that blossom into promising projects. The students described how MIT fosters an ideal environment for them to thrive.

As dessert was being served, Barrie Zesiger invited each of the graduate students to share “the science version of dark chocolate” — an exciting project or finding from their labs. Some research highlights included an update from Halie Olson, the 2019 Nancy Garvey fellow, who is a third-year student in the Rebecca Saxe and John Gabrieli labs. She shared some preliminary data that suggests children with autism exhibit more activation in their brain’s language networks when they listen to stories relevant to their interests, compared to neutral stories. Francisco Garcia, the 2019 Burnett fellow who is a third year in Myriam Heiman’s lab, discussed his research on the mechanisms and restrictive properties of the blood–brain barrier that affects neurodegenerative diseases and informs strategies for drug development, including a new target implicated in Huntington’s disease. João Loula, the 2019 Stark fellow who is a second-year graduate student in Josh Tenenbaum’s lab, shared how he is taking insights from developmental psychology and using them to create smarter artificial intelligence (AI) models. The lab recently developed an AI that can learn to play a videogame after a few tries, just like a human.

The annual Champions of the Brain Fellows event honors donors who commit $70,000 or more through an endowed, expendable, or corporate gift to support graduate students at the forefront of cutting-edge research in BCS.