Breakthroughs in math and physics 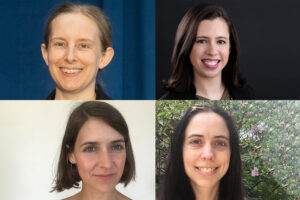 Three MIT faculty members and one alumna have been named winners of prizes awarded by the Breakthrough Prize Foundation, which honor early-career achievements in the fields of physics and mathematics.

Tracy Slatyer and Netta Engelhardt will each receive the 2021 New Horizons in Physics Prize, an award of $100,000 that recognizes promising junior researchers who have produced important work in their field.

Lisa Piccirillo and Nina Holden will each receive the 2021 Maryam Mirzakhani New Frontiers Prize, a $50,000 award that recognizes outstanding early-career women in mathematics. The prize was created in 2019 in honor of Iranian mathematician and Fields Medalist Maryam Mirzakhani, who made groundbreaking contributions to her field before her death in 2017 at the age of 40 after battling breast cancer.

“The New Horizons and New Frontiers prizes recognize some of the most talented young researchers in the world,” says Nergis Mavalvala, dean of MIT’s School of Science, and the Curtis and Kathleen Marble Professor of Astrophysics. “I’m thrilled that four colleagues from MIT have been recognized as amazing researchers who have already done important and impactful work. I can’t wait to see what comes next from these brilliant young women.”

Both prizes are part of a family of awards given out each year by the Breakthrough Prize Foundation and its founding sponsors — Sergey Brin, Priscilla Chan and Mark Zuckerberg, Ma Huateng, Yuri and Julia Milner, and Anne Wojcicki. The winners are chosen by a committee of past awardees in each field.

Tracy Slatyer is the Jerrold R. Zacharias Career Development Associate Professor of Physics at MIT, and will receive the 2021 New Horizons in Physics Prize “for major contributions to particle astrophysics, from models of dark matter to the discovery of the ‘Fermi bubbles,’” according to the award citation.

A theoretical physicist who works on particle physics, cosmology, and astrophysics, Slatyer has pioneered new techniques to search through telescope data for clues to the nature and interactions of dark matter, which is thought to make up more than 80 percent of the matter in the universe. She has used data from the Fermi Gamma-Ray Space Telescope to co-discover the Fermi bubbles, a mysterious structure of high-energy gamma rays bubbling out from the center of the Milky Way galaxy.

Slatyer grew up in Canberra, Australia, and received her undergraduate degree from the Australian National University. She carried out postgraduate research at the University of Melbourne before moving to Boston in 2006 as a graduate student at Harvard University. She worked as a postdoc at the Institute for Advanced Study in Princeton, New Jersey, for three years before joining the MIT faculty as a member of the Center for Theoretical Physics in 2013. She is the recipient of the Henry Primakoff Award for Early-Career Particle Physics and a Presidential Early Career Award for Scientists and Engineers.

Netta Engelhardt is an assistant professor of physics and a member of the Center for Theoretical Physics at MIT. She shares the 2021 New Horizons in Physics Prize with three others: Ahmed Almheiri of the Institute for Advanced Study, Henry Maxfield of the University of California at Santa Barbara, and Geoff Penington of Stanford University. The prize recognizes the researchers “for calculating the quantum information content of a black hole and its radiation.”

Black holes are thought to contain a huge amount of information in the form of the matter that falls into them. They are also known to emit radiation in response to quantum jiggling of their surroundings. To what extent information is released along with this radiation has been a conflicting question for both quantum mechanics and Einstein’s theory of gravity.

Engelhardt, Almheiri, and Maxfield found that as matter falls into the black hole, the information that it contains increases. As the black hole ages, it gives off radiation and in the process spews information back out. Penington came to the same conclusion independently. Together, the researchers’ work showed that information can indeed safely escape a black hole.

Engelhardt grew up in Jerusalem and Boston. She received her undergraduate degree from Brandeis University and her PhD from the University of California at Santa Barbara. She was a postdoc at Princeton University and a member of the Princeton Gravity Initiative before joining the MIT physics faculty in July 2019.

Lisa Piccirillo is an assistant professor of mathematics at MIT. She is being awarded the 2021 Maryam Mirzakhani New Frontiers Prize “for resolving the classic problem that the Conway knot is not smoothly slice,” according to the award citation.

For decades, the Conway knot was an unsolved problem in the subfield of mathematics known as knot theory. One of the fundamental questions that knot theorists try to puzzle out is whether a knot is a “slice” of a more complicated, higher-order knot. Mathematicians have determined the “sliceness” of thousands of knots with 12 or fewer crossings, except for one: the Conway knot. Named after the mathematician John Horton Conway, this knot consists of 11 crossings, the sliceness of which mathematicians had struggled for decades to explain.

Piccirillo heard about the Conway knot problem as a graduate student at the University of Texas at Austin. Over one short week in the summer of 2018, she solved the puzzle, with a proof that showed the tricky knot was in fact not a slice of a higher-order knot. Her work, and the classical tools she used to lay out her proof, were published earlier this year — a feat that generated widespread interest beyond the mathematics community.

Piccirillo was raised in Greenwood, Maine, and earned an undergraduate degree from Boston College. She earned a PhD in low-dimensional topology at the University of Texas at Austin and worked as a postdoc at Brandeis University before joining the MIT faculty in July 2020.

Nina Holden PhD ’18 is a junior fellow at the Institute for Theoretical Studies at ETH Zurich, and an alumna who earned a doctorate in mathematics from MIT in 2018. She is a recipient of the 2021 Maryam Mirzakhani New Frontiers Prize “for work in random geometry, particularly on Liouville quantum gravity as a scaling limit of random triangulations.”

Holden’s research focuses on probability theory, and in particular, conformally invariant probability. She studies universal models for random surfaces, which are of interest in mathematical physics and theoretical probability.

A classical result in probability theory is that a random walk converges to the continuum random process known as Brownian motion when the lattice size is sent to zero. Holden has proved similar convergence results for discrete random surfaces known as random planar maps. In particular, she proved in joint work with Xin Sun that certain random planar maps known as triangulations converge to the continuum random surfaces known as Liouville quantum gravity surfaces. This confirms predictions made in string theory and conformal field theory in the 1980s, and is also of fundamental interest in theoretical probability theory.

Holden earned her bachelor’s and master’s degrees in mathematics from the University of Oslo before pursuing a PhD in mathematics at MIT, where she studied with Scott Sheffield, the Leighton Family Professor of Mathematics. She will be an associate professor at the Courant Institute of Mathematical Sciences at New York University in 2021.